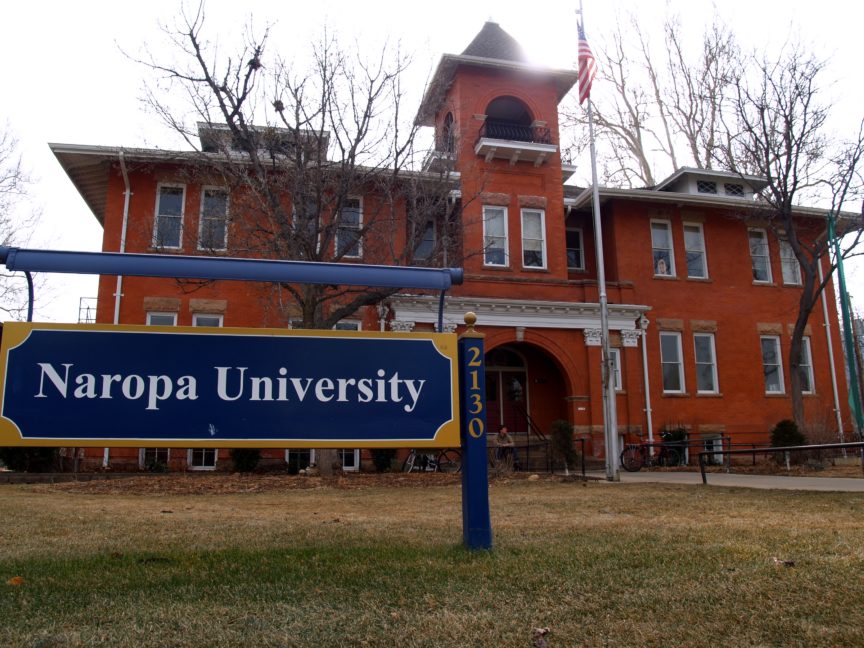 Boulder is for Buddhists.

The city has a Buddhist-inspired university, a Buddhist publishing company and is home to the world’s first Shambhala city center. Boulder has multiple Buddhist temples, groups, meditation gatherings and yoga studios, some with Buddhist undertones.

If you’re looking to connect with Boulder’s Buddhist community, here’s how you can make like the Dalai Lama. (He’s visited Boulder twice.)

1. Visit or study at Naropa.

Naropa University, 2130 Arapahoe Ave., was founded in the ‘70s by a Tibetan Buddhist monk, Chogyam Trungpa Rinpoche. Today, it’s the country’s only Buddhist-influenced university (although it is secular). Check Naropa’s events calendar for workshops, shows and art installations. 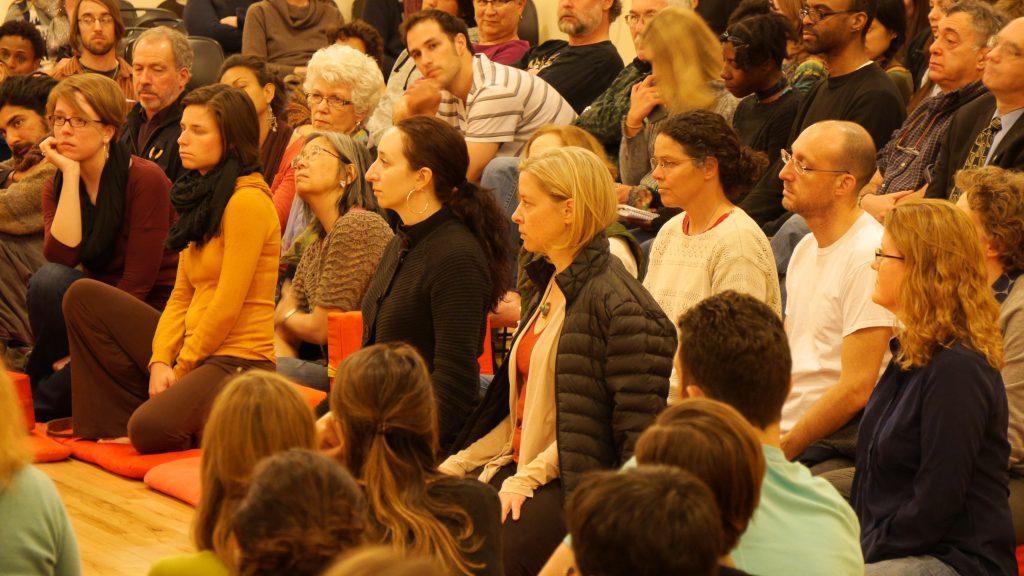 A group of participants at the Boulder Shambhala Center. Courtesy photo

2. Check out the world’s first and largest Shambhala city center.

The Boulder center offers lots of regular, weekly, drop-in programs that are free and open to the public, from meditation practice (with no instruction), to instruction and talks. There’s even a Young Sangha class for younger meditators (starting at age 16).

The Main Shrine Room is open to the public for meditation every day of the week except Saturday.

3. Fill your shelves with books from Shambhala Publications.

Boulder is home to the largest publisher of English-language Buddhist books in the world. Check out the list of books published by Shambhala Publications, 4720 Walnut St., and add a few to your bookshelves back home.

One place to visit is Dharma Ocean’s Boulder Meditation Center, 2525 Arapahoe Ave.  While Dharma Ocean is not an organized religion and is not Buddhist-specific, it offers various meditation options, some of which have Buddhist angles. For example, learn about Vajrayana Buddhism in an Emotional Awakening class, which you can take online. You will learn about the role of emotions in meditation.

Even if you’re not a practicing Buddhist, studies have found meditation is good for your health and can reduce anxiety, depression, pain, high blood pressure, sleep problems — and can even help with heart disease and cancer. The Mayo Clinic notes many of meditation’s roles in health and wellness. 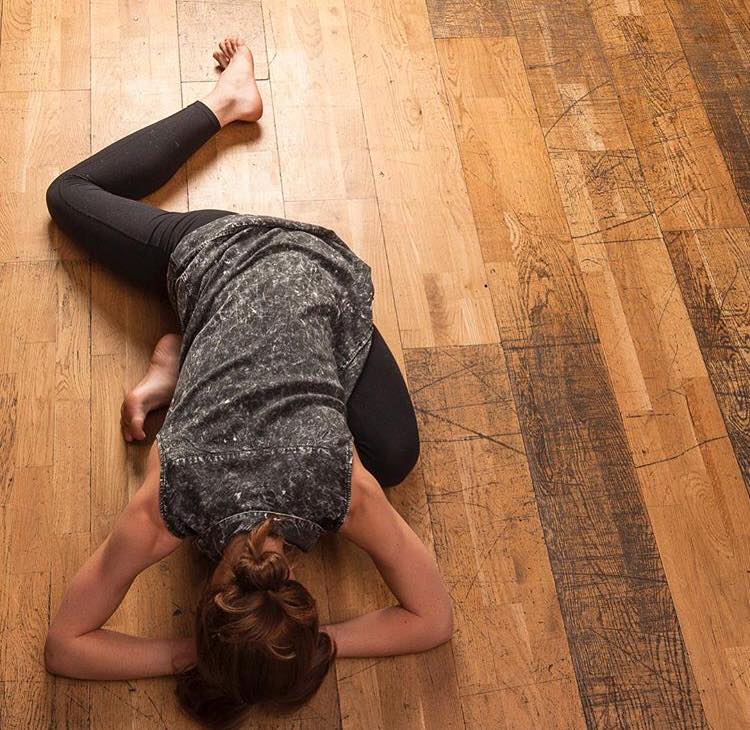 Not all yoga classes in Boulder have Buddhist influences, but some classes and teachers do. For example, at The Little Yoga Studio, 2525 Arapahoe Ave., teacher Brooke McNamara is ordained as a monk and a dharma holder in the Zen Buddhist lineage of Diane Musho Hamilton, Sensei.

Deepen your connection to local Buddhists and your own practice at a temple. A few include the Boulder Zen Center, 2151 Arapahoe Ave., Hakubai Temple, 1275 Cherryvale Road and Nalandabodhi Boulder, 100 Arapahoe Ave., Unit 6. 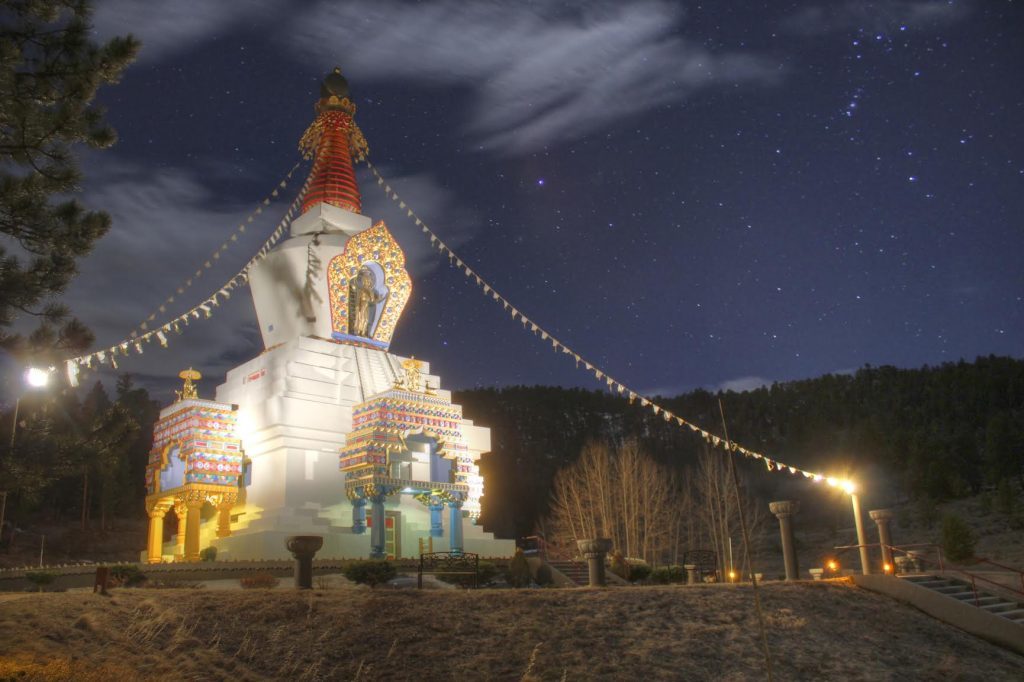 The Great Stupa at the Shambhala Mountain Center. Photo by Zane Edwards

7. Escape to the Shambhala Mountain Center.

The Shambhala Mountain Center is the most famous place in Northern Colorado to immerse yourself in meditation and mindfulness, although it’s not technically in Boulder. This center, located at 151 Shambhala Way in Red Feather Lakes about two and a half hours from Boulder, offers more than 100 different programs every year taught by reputable teachers. Sign up for a weekend or week-long meditation and mindfulness retreat or plan a self-guided getaway. The center also offers meditation sits multiple times a day (morning, noon and evening).

Although the 600-acre Shambhala Center is a drive, it’s common for many Boulderites and Boulder visitors to make the trek.

One of the biggest attractions of this center is the 108-foot-tall Great Stupa of Dharmakaya, established in the ‘70s by Rinpoche himself. It is considered one of the most important examples of sacred Buddhist architecture in the country. 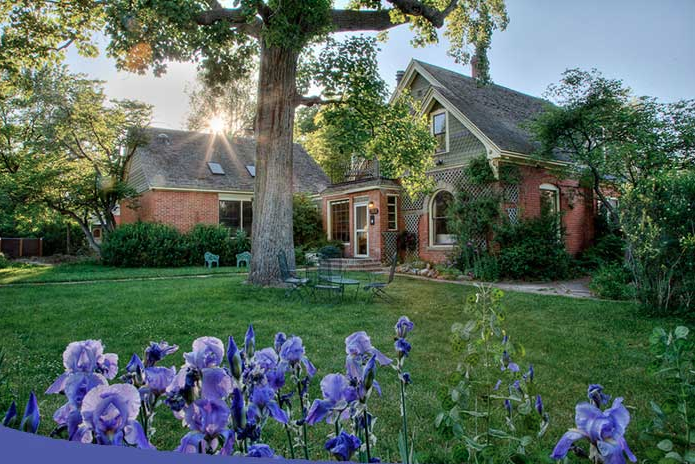 The Briar Rose Bed and Breakfast, 2151 Arapahoe Ave., is not exclusively a Buddhist retreat, but it is owned by a practicing Zen Buddhist and the stunning, historic B&B is home to a meditation room for Dharma Sangha Boulder. There’s a meditation every day, and weekday mornings there’s a chanting and bowing service.

The Dharma Sangha Center also organizes multiple Zen seminars, potlucks, seminars and more. Most events take place at the Briar Rose, making a perfect combination if you want to stay in Boulder city limits and incorporate meditation and mindfulness into your vacation.

Fuse your meditation with nature during the Nature Meditation Retreats offered through Impermanent Sangha. These meditation retreats take guests into the wilderness not far from Boulder to immerse in nature, community and mindfulness. The remote location helps deepen the practice, the Sangha says.

As the website explains, “According to the traditional story, the future Buddha was born in a forest grove, left home to practice in nature, awakened under a tree, lived and taught in nature and passed away in nature. When Mara questioned his enlightenment, the Buddha touched the earth as witness to his realization.”

In these unique retreats, participants meditate together at sunrise and sunset, go hiking during the day and participate in discussions around the campfire at night. Choose between lodging in a dorm or camping in a tent. 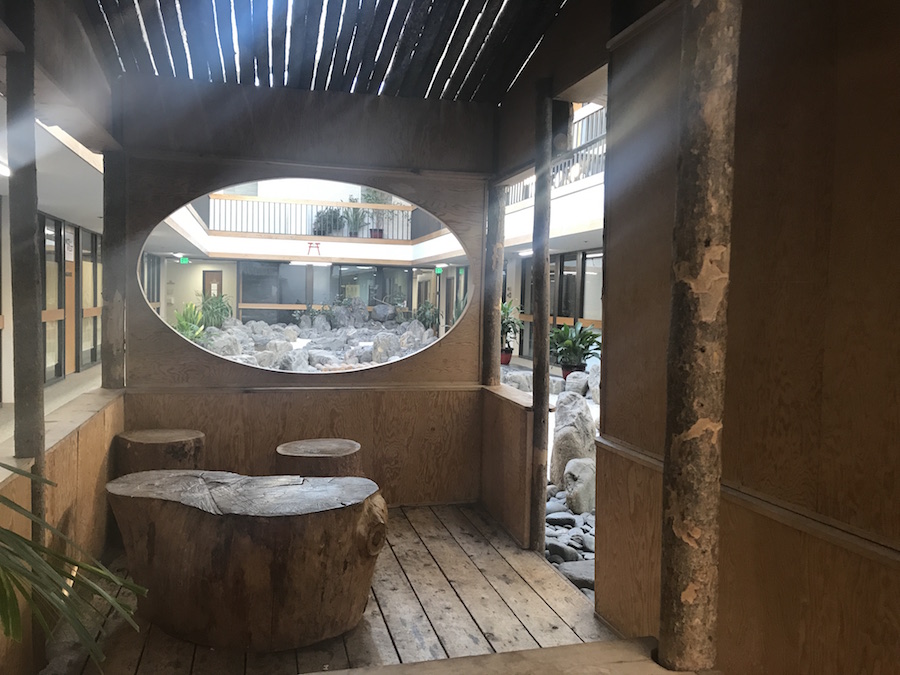 A wooden building inside the Zen garden. Photo by Aimee Heckel

Here’s an unexpected place to find some peace. The Crossroads Garden Building, 1800 30th St., Boulder, primarily houses other healing arts businesses, such as rolfers, psychotherapists, meditation centers and even a Buddhist accounting firm. The building has a Zen rock garden in the middle that you can visit, even if you are not using the Buddhist accountant.

11. Connect with the Tibetan Association of Colorado.

The Boulder-based Tibetan Association of Colorado is another resource where you might be able to find fellow Buddhists and events. This group has helped bring the Dalai Lama to Boulder. The nonprofit works to support the Colorado Tibetan community and culture; more than 300 Tibetans live in Colorado. As the Dalai Lama has been quoted saying, “Tibetan culture is a culture of peace and non-violence; it’s a culture of compassion. More and more people are coming to appreciate such values.”

Nalandabodhi Boulder, 100 Arapahoe Ave., Suite 6, in Boulder, was founded to teach meditation, mindfulness and more based on the authentic lineage of Buddhist teachings. It was the first center in the Nalandabodhi mandala. Here, you can take the intro to Buddhism course and check the calendar for other community events. Coming up April 15-18: the DoNothing Leadership Retreat, a silent retreat designed for business leaders, entrepreneurs and others.

You can find public meditations on Meet-Up groups online. For example, Wednesday evenings at 7 p.m. at The Meditation Place, 324 Main St. in Longmont, meditate with Tibetan teacher Lhoppon Rinpoche, who studied in a monastery from age 5 and eventually left TIbet. The events are not exclusively Buddhist but may connect you with other likeminded people. The class costs $10 per guest.

By the Numbers: How Buddhist is Boulder?

It’s hard to quantify, and the numbers aren’t decisive. Here’s a quick look at a few of the facts.

Less than a half a percent — Estimated population of Buddhists in Boulder, according to the Religion Census

About a dozen — Buddhist congregations in Boulder County

4,000 — Participants (not active members) of the Shambhala Center

1,400 — Estimated number of active Buddhists in Boulder, according to the Association of Religious Data Archives in 2010