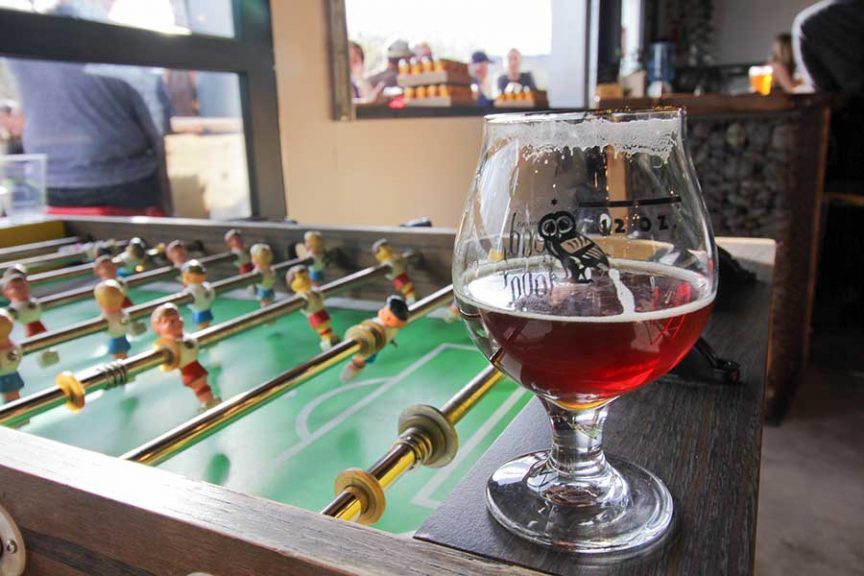 Beer goes great with pretzels. And breweries? They pair perfectly with yoga, trivia and lawn games.

The craft beer scene is booming in Boulder County. Not only are there dozens of breweries throughout the county, but Boulder is the headquarters of the Brewers Association, which promotes independent craft brewers around the country.

But what if, gulp, you don’t exactly love beer? Or, on the other end of the spectrum, you love the craft beer scene so much that you want to hang out at breweries as much as possible?

Fret not, you can find a hoppy medium at Boulder’s breweries.

More and more, breweries are showing off their versatility, proving they are the consummate hosts.

Here are eight ways you can enjoy Boulder’s breweries, besides the obvious: drinking beer.

What it is: Pints of beer and yoga poses are both on tap at this brewery. While the brewhouse yoga trend has taken off across the country, Sanitas is going a step further and offering pilates classes, too. It makes sense; Breweries have some raw, open spaces perfect for setting up a mat and then nama-staying around for a beer.

What else can you do at this brewery? Got talent? Does it get better after imbibing with a tasty pint of craft beer? Show off your skills at open mic nights from 6:30 p.m. to 9 p.m. on Wednesdays. Also, circle Aug. 5 on your calendar because Sanitas is having a TacoFest with 20 different types of tacos, as well as a pinata. It’s worthy keeping tabs on the brewery’s events calendar, too, because last spring they offered up NSFW coloring night that brought beer lovers together to color in vulgar coloring books.

Another popular beer and yoga fusion is Outlaw Yoga, offered at different breweries in the area.

What it is: In the gardening world, succulents are like that chill friend that doesn’t need a ton of attention and that is effortless cool. They deserve to be rewarded, yes? Sipping with Succulents is an avant-garde event that basically brings people together to drink beer and paint boxes for their succulents and plants.

When it is: This event typically happens once a month. Check out the events calendar to see when it happens next.

What else can you do at this brewery? So much cool stuff. There’s even a cornhole league you can compete in, plus staples like live music and food truck guests.

What it is: A three-part book club for women will take place at the brewery this summer. The Inspired Book Club is a subscription service that costs $35 a month and each month you will get an inspirational book, as well as organic tea and other products. The book club events at the brewery will bring in The Bright Life Coach Samantha Lawrence to help lead discussions about personal development. The book club during June is reading “Find the Good” by Heather Lende.

What else can you do at this brewery? Aside from regular live music and karaoke, this brewery hosts the occasional Bingo night (bring Grandma!) and pottery painting.

What it is: Take swing dancing lessons with Boulder Swing Dance instructors, have a beer and show off your moves.

When it is: Lessons start at 6:30 p.m. on Wednesdays. Afterward, you can hang out and practice. Since these are progressions classes starting at the beginning of each month, you need to attend one of the first two weeks to continue on with weeks three and four. The cost is $15. Learn more here.

What else can you do at this brewery? Bring your own vinyl records to the brewery on Sundays for a “vinyl night.” They also have trivia and live music regularly appearing on their events calendar.

5. Try Your Luck at Trivia

What it is: Pop quiz: In Right Said Fred’s lyrical masterpiece “I’m Too Sexy,” which of the following is Fred not too sexy for?

If you answered A, you’re correct and should lend your superpowers to a trivia team. Geeks Who Drink stage their takeover of this brewery competing in trivia games on a weekly basis.

What else can you do at this brewery? In addition to enjoying all-day happy hour specials on Mondays, Tuesdays and Fridays, you can also partake in open mic nights (or just listen to poets and musicians) from 6 p.m. to 8 p.m. on Tuesdays.

Boulder Beer’s The Pub on Wilderness, 2880 Wilderness Place in Boulder

What it is: How about a free concert to play back-up to your beer drinking? Live music reverberates through this pub twice a week. In fact, the brewery’s events calendar shows that many bands are booked for the summer. Included on the roster: Sunshine James on July 1, Hot Foot Trio on July 15, 303 Blues Project on July 22 and more.

When it is: Live music nights happen from 5 to 9 p.m. on Thursdays and Saturdays.

What else can you do at this brewery? Stop in for lunch on Tuesdays. You can get a $1.25 lunch beer. Also, brewery tours happen daily at 2 p.m., with an additional 4 p.m. tour on Saturdays.

What it is: Cornhole is our favorite brewery amenity. (For the uninitiated, it’s a bean bag toss game, with points scored when you accurately toss your bag in a hole on the game board.) But Fate Brewing Co. gets extra credit for its patio, which has a trellis of hops and offers up a pretty stellar view of the July 4 fireworks that blast off from Folsom Field.

What else can you do at this brewery? Enjoy an all-day brunch from 10 a.m. to 4 p.m. on Saturdays and Sundays. A star of the menu: Chicken and waffles that are made with a jalapeno cornbread and cherry-jalapeno chutney.

What it is: Rocky Mountain Brew Runs teams with breweries throughout Colorado for beer runs and post-run games known as the Beer Olympics. (Think: Keg haul relays and cornhole competitions.) Take part in Boulder Beer Co.’s annual run that coincides with the brewery’s annual anniversary party on June 24.

When it is: The Boulder Beer Co. brew run starts at 10 a.m. on June 24. After the 5K run, stick around for live music, a T-shirt tie-dye station and to taste beers that aren’t available to the public yet.

Registration: The registration fee is $35. Kids 12 and under can run for free at this family-friendly run. The registration fee includes your run entry and a pass to the beer Olympics games, as well as a beer from the Boulder Beer Co., a pint glass, coaster and a Jimmy Johns sandwich. This first 150 registrants will also receive additional swag.