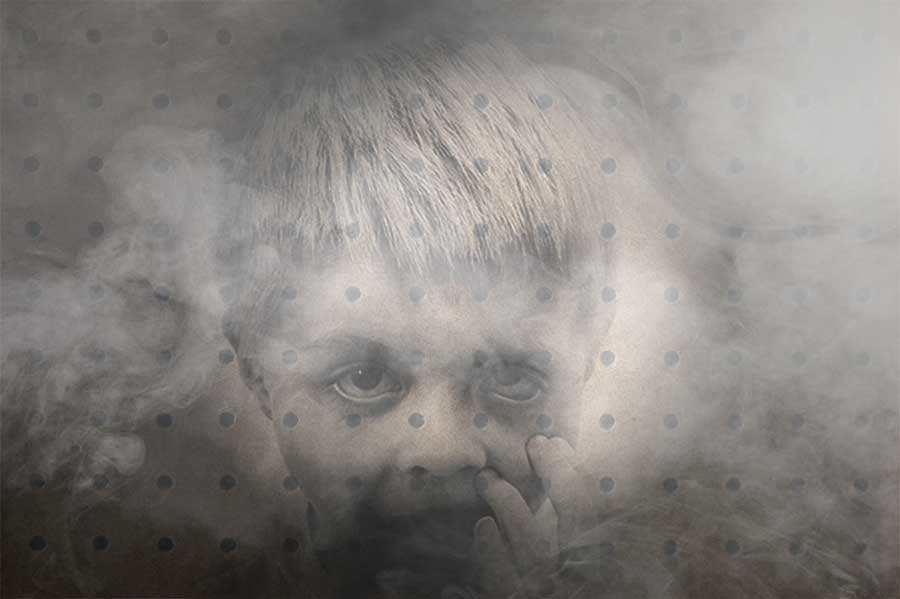 Dorothy didn’t want to chop firewood or feed the dirty chickens or clean her room. She was sure her mom made her do all of the worst things around the farm because she didn’t want to do them herself. Maybe that was why she’d had a kid, to sweep the coop and hold up eggs against the sun to make sure they weren’t all full of baby chickens.

She was supposed to start on her chores while her mom was gone. Mom would be back from the neighbor’s in a few minutes because you can’t leave a seven-year-old at home alone for too long or the police will catch you. To Dorothy, that meant a few minutes of uninterrupted play time before her mom ruined the rest of this summer day with chicken coops.

She bounced down the stairs to the playroom and flipped on the switch, filling the small space with fluorescent light and a low buzzing sound. She left the playroom door wide open, so she could hear her mom when she got home and quickly push everything under the bottom shelf to pretend she was cleaning.

Knowing she only had a short time, Dorothy went straight to her favorite game: setting up the most elaborate My Little Ponies kingdom that ever existed. She crouched in the back corner of the skinny playroom with its floor-to-ceiling plywood shelves that were supposed to organize all of her toys, except most of them still ended up on the floor.

Her dad had built the shelves himself. He was the brainy type, never very handy or crafty, but neither was Mom, so he had to fake it. He rigged everything together in the silliest of ways, relying entirely on duct tape, twisty ties, super glue, and bailing wire. Nothing he built ever lasted, and it was all always on the edge of collapse, which he would repair with more duct tape, the solution to all household problems, although he had not used duct tape to affix the shelves to the wall. Maybe they needed some because they were wobbly when Dorothy climbed up them like a ladder to get a box of Barbie clothes to repurpose for her ponies.

The front end of the playroom did double duty as the boiler room. The fancy, newish hot water heater moaned at the demand of laundry upstairs. The entire back wall of the playroom was covered in brown pegboard, a strange feature for what was supposed to be a children’s zone. The board didn’t hold any hooks, like a normal pegboard wall that was used to organize things like tools or cleaning supplies. It was just a galaxy of tiny honeycomb holes with no purpose.

She felt their gaze on her back and it made her shiver. It felt like someone was watching her, but of course, no one was because her dad had gone hiking and her mom was at the neighbor’s. Dorothy lifted a pink plastic couch that she was going to make the centerpiece of the Queen Pony’s mansion. Her hand froze with the chill of fear. She felt something unmistakably different in the air, in the same way that you can feel when a snowstorm is blowing in even though you can’t see it. The playroom’s energy was heavier, yet sharper, and she could almost smell the shift. She was not alone.

Her eyes darted across the playroom, scanning the levels of shelves for any sign of movement. She was too short to see what was on the top few shelves. They were solid shadows. She tried to call out “hello” but her voice was stuck. She turned face to face with the pegboard.

Frantically, Dorothy grabbed a handful of Barbie accessories and began sticking them one by one into the pegboard holes, plugging them so the wooden pupils couldn’t see her. She wedged the pointy foot of a detached Barbie leg into a hole as high as she could reach. She paused on tiptoes, glaring back at the black circles, and she wondered what was behind the board. She wondered who had hung it there and why, since her family had never used it. She stuck one pinky finger into a hole and twisted, and to her surprise, it did not hit a wall behind it. Her heart skipped. Her inhale felt like fear, her exhale felt like curiosity, and the dance between the two tormented her.

She took a brave breath and pressed her cheek against the pegboard, trying to see through one of the holes, but she detected only darkness. She squinted and begged her eyes to adjust. Still nothing. But it was not the kind of darkness of a dead end. It was the kind of darkness that you can just somehow feel goes on.

Something cracked behind her, and the playroom door slammed shut. She whirled around, expecting to see someone, but the room was empty. She heard a cracking again and looked up. The toes of a bare foot dangled over the edge of a top shelf.

Her feet were faster than her cry, and she was at the playroom door. She reached for the round, brass handle, but it glowed an eerie orange. She stopped and noticed the hot water heater to her left was smoking. It must have heated the handle. There was no other way out. She couldn’t touch the handle, so she kicked at the wooden door, but it didn’t budge. Her eyes watered from the quickly growing cloud of smoke, or maybe those were tears.

Now it didn’t matter if she got in trouble. “Mom! Mom!” But she knew her mom would not hear her. The neighbor was about a mile of bumpy dirt roads away. Dorothy threw her body against the door and slid hopelessly to the carpet. She crawled below the layer of smoke to the back corner by Ponyland. She grabbed her knees to curl her body into the smallest knot as far away from the fire as possible. Flames reached upward for the light fixture, and in between the plumes and sparks, she saw him.

He was younger than her. Maybe three. He had messy brown hair that stuck out like a scarecrow. He had wide, circular brown eyes and thick rosebud lips trembling in a silent scream and he was staring straight at her; his fat hands reached out like he was trying to grab onto her. A large blob of a pinkish birthmark painted his right cheek and eye, and the skin looked red where the tears had striped across it. He stood in the center of the fire, until his wobbly legs gave out and Dorothy pulled her face into the protection of her hands. She couldn’t help, but she couldn’t watch him burn. So she hid.

Her mom’s voice sounded like it was planets away.

Dorothy peeked through her eyelashes to realize she was lying in a ball in the corner of the playroom. She jolted up.

Her mom tilted her head and pulled Dorothy into her chest. She rocked her, which opened the normally stubborn dam around Dorothy’s emotions. She wedged her head into her mom’s warm armpit and didn’t even pull away when her tears and then snot got all over her mom’s nice shirt.

“He looked at me,” Dorothy nearly whispered. “He was so sweet and small, but I couldn’t help him.”

“I’m fine!” Dorothy’s voice caught on the way out. “I didn’t touch the fire.” She felt her mom’s muscles clench. “He was burning, and I couldn’t do anything.”

Her mom sat upright and pushed Dorothy away. She grabbed Dorothy’s face with her hands. She swallowed loudly before she spoke. “What, what did the boy look like?”

“He had brown hair and eyes and a big birthmark across his cheek.”

The words hit Dorothy’s mom like a gunshot. She grabbed her stomach like she was hurt. “No. No. No.”

“Uh-huh,” Dorothy insisted and pointed to the hot water heater. It was an untarnished white with no signs of a fire. She clutched her head in confusion, but stopped. The carpet near the heater looked like it could be discolored with soot. She stumbled her way to the proof and yanked at the dirty shag. “See? See?”

“No,” her mom repeated, then clarified. “I believe you, Dorothy.”

Dorothy stopped plucking at the carpet and looked up. “You do?”

Her mom nodded, clearly not wanting to explain, but she had to. “Before we moved into this house, the side yard used to contain a half dozen small tombstones. Children’s graves is what the previous residents told us.”

“Wait, our veggies are growing in a graveyard?” Dorothy asked with pale cheeks. “That’s where the vegetable garden is.”

“No, of course not,” her mom said. “Per our request, the sellers removed the bodies before we moved in and planted anything.” Dorothy didn’t speak, so her mom continued. “They quietly cremated them and scattered their ashes across the farm, out of respect for history.”

“Technically, that means they burned their bodies. But it’s a very common and normal thing to do,” her mom said with a forced smile. She patted Dorothy’s head, but the gesture irritated her daughter instead of soothed her. “Anyhow, years later, we found a box of old photos in the attic. Presumably, the original residents who built this farmhouse, but we never knew for sure. The photos were from the Victorian times, at the turn of the century. I, uh, I know this because they were all photos of children.” Her mom paused. “Dead.”

“Also a very, very common and normal thing to do with dead bodies, back then,” her mom said with a faint tremor in her voice. “They posed and staged corpses for photos. To remember them by.”

“I guess that’s better than burning them,” Dorothy mumbled. “I don’t know.”

Her mom nodded and reached for Dorothy’s hand. “I donated the photographs to the library, but I can still see them in my memory. One in particular.”

She didn’t need to describe the face. Dorothy knew. She’d seen him, too.

Then something struck her. “What about the foot I saw?” she asked, motioning to the plywood shelves.

If the boy in the fire was just a ghost, an echo from the past, that didn’t explain whose foot had she seen on the shelves. That her dad had built. More than a decade after the first family had died. She was sure it looked real.