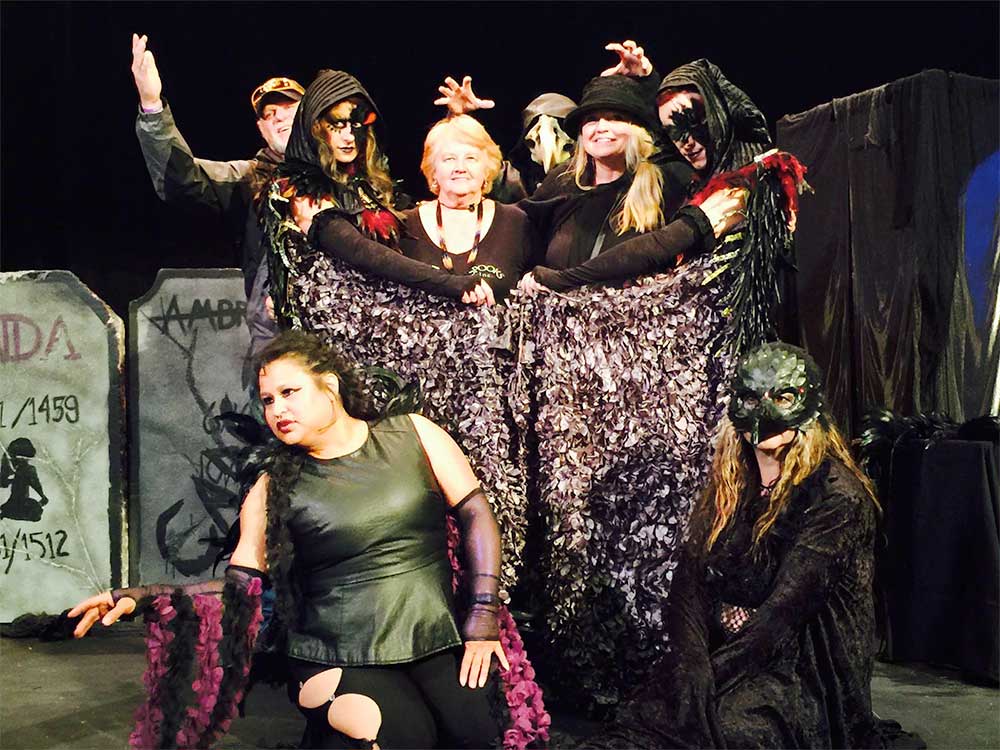 Dori Spence is Boulder County’s most unusual historian. Her city tours are the other side of normal.

Spence, of Longmont, is also a psychic paranormal investigator. That means she helps police departments solve crimes by communicating with ghosts.

She’s been in the field for more than 40 years. This fall, she is running ghost tours through Longmont and Loveland, as well as participating in other paranormal events — plus the private gigs she gets to help with murders, disappearances and unsolved crimes around the country.

The Making of a Psychic

It all started when Spence was a teenager. A friend complained about being stood up on a date, and Spence got a sudden vision. A scenario. She heard voices, almost like a phone call inside her head:

He didn’t show up because his car broke down.

The voices were right, time and time again, when her friends came to her for help. The ability began randomly showing up on its own. Sometimes when she was quiet, she felt like she could pick up on what someone was thinking across the room.

“I thought I had a connection with God or was part of the angel realm,” says Spence.

When Spence was traveling with the “Up With People” singing group, the group would meditate for about 15 minutes before a show and write down whatever came to them. Ideas poured into Spence’s mind about how to get sponsorship, where to travel, what songs to sing.

She says she thought it was just inspiration.

Then she learned about “channeling,” or speaking to spirits and ghosts. She began wondering about it casually on the side; she was a mother of three, pregnant with her fourth. She says she didn’t have time to get serious about it. Then one night in 1988, she got a vision about a crime. She says she wrote down what came to her, and the next day, she learned a friends’ daughter had been kidnapped. She gave the police her information — and she says it helped. Her story ended up in major newspapers across the country and she was interviewed on “The Today Show.”

This case launched her career working with law enforcement.

She says she has worked with a district attorney in Boulder, as well as the Weld County Sheriff’s Department.

The information Spence says she receives is far from an exact science, she says. First, she can’t force anyone to say anything. She likens it to a phone call. The “other side” has to choose to call, and they choose what they say. It’s up to her to try to receive the message as clearly as possible.

“It’s like a puzzle. You have to figure out when your mind’s interfering, and that’s the trick. We all have the psychic sensibility, like birds flying south in the winter. It’s an instinct. If there’s any training involved, it’s to learn to bypass your mind and just be a receiver, like picking up the phone and listening to see who’s there,” she says.

Spence says the information for her first big murder case arrived strangely, in the form of an almost riddle:

The riders were left without horses and the victim’s considered a thief.

Just like tangible crime scene evidence, she says, some things you find on the scene may not fit. Some, you may never figure out. If there’s blood on the street, you have to figure out if it’s current, from the victim, from the suspect or totally unrelated.

The psychic pieces come in the same way, Spence says.

By the time she birthed and was homeschooling her fifth child, all while developing a private school, Spence says she was too busy to pursue the paranormal investigations. She let it go. For a while.

Years later, in 2000, Spence was traveling in Canada when she went on a ghost tour. Throughout the tour, she says she got visions about things that happened there, but the guide didn’t talk about them. At the end of the tour, the man disclaimed, “I don’t believe any of this, but the stories are strange and it’s good entertainment.”

Spence says she realized she could lead ghost tours. Real tours. By someone who believed.

When she returned to Longmont, she says she began visiting the town’s historic buildings. She collected stories from locals and then spent time in the spaces to see if any information came to her. Details began flooding in that the building owners didn’t know about, like the use of one building as a boarding house for women, and the use of another building as a temporary home for “hobos” traveling to Longmont to work on the sugar mill. She says she dug through historical documents and the information she had received was correct; the building owners were shocked.

“This is not just spooky, made-to-order entertainment,” Spence says.

Her tours evolved into an organization, the Society of Kindred Spirits, or SPOOKS for short, which became (to her knowledge) the first (if not the only) federally exempt, 501C3 paranormal nonprofit.

She says the idea for the nonprofit came to her from her “familiars.” That’s what she calls the 40 different spiritual regulars who communicate with her, mostly through writing. Familiars are like guardian angels or spirit guides, she says. They are spirits: invisible beings with a different frequency of energy. Ghosts, on the other hand, are residual energy left behind by people who were physical, Spence explains. They’re not the same thing, she says.

“People tease me and say, ‘You believe in disembodied voices,’” Spence says. “But so do you every time you answer the phone. It comes across the air with energy. … Same with a TV set. I can watch soccer live in Europe. All of that energy comes through one cord in the back of my set. Those energies are like that.”

Just like the wind, she says. You can’t see it, and when you are indoors, you can’t even feel it. But it’s still there, she says.

Spence believes there’s no such thing as a person who doesn’t believe in the paranormal.

“There are just people nothing has happened to yet,” she says. “Whether it’s a tap on the shoulder in the night or a cold spot in the room or a voice in your head, when it happens, people never forget it. It really is true.”

Today, in addition to her ghostly history tours, Spence has returned to occasional paranormal crime work.

She is currently working on a case about a California man who mysteriously disappeared. Her information suggests the man ran away and that he is safe.

She also is involved with Haunted Weekends (getaways to haunted hotels), the Annual Spirits of the Rockies Paranormal Convention (in November), Dining with the Dead (visiting cemeteries to pick up energy and then comparing that to documented history), Ghost Encounter Talks at coffee shops (sharing ghost stories), Haunted Happy Hours, fundraisers, site inspections of private houses — everything you can imagine “for ghost enthusiasts and enthusiastic ghosts,” Spence says with a laugh.

Here are a few events you can attend this month.