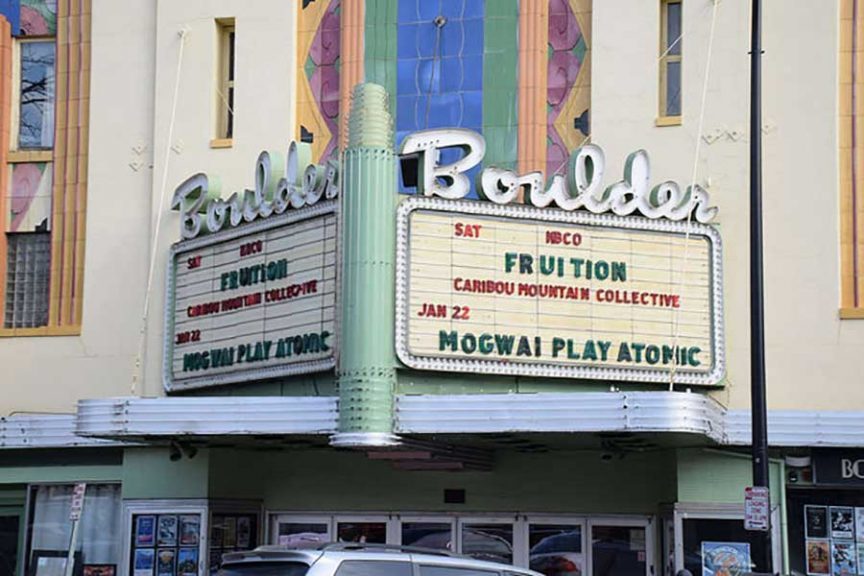 Before you even walk inside, it’s clear the Boulder Theater has a unique story.

From the Pearl Street Mall, this pastel art deco landmark leaps out from the side of a rock facade. It’s a Colorado Historic Landmark. By night, its large marquee glows brightly in red, white and blue. It’s where things are happening in Boulder.

During its 75-plus years, the Boulder Theater has seen some huge name musicians, such as Bonnie Raitt and Leftover Salmon, as well as all kinds of performances — pole dancing, tribute shows, stand-up comedy, film festivals, you name it. Its ideal location right in downtown makes it a hotspot for visitors and locals alike, and an appealing destination for performers who want a stage with quick access to the Colorado mountains and one of the most vacation-y walking malls in the world.

Here’s a closer look at the Boulder Theater’s interesting history, plus some inside tips on how to get the most out of a show there.

Inside Tips for the Boulder Theater

What can you see at the Boulder Theater? You’ll find a line-up of live music of all kinds, comedy, conferences, competitions, private parties, spoken word and poetry, film, dance and more.

Where to stay? If you want to save money, the Boulder Theater has special lodging rates with the University Inn and Boulder Quality Inn.

Where to pre-party? Grab wine, beer, cocktails and small plates at The Lounge, which opens at 5 p.m. right next door to the Boulder Theater. Look for specials like half off wine by by the glass on Wednesdays.

Where are the best seats? The VIP seats: Box seats on the first row of the balcony in the middle. They come with your own cocktail server (so no waiting in lines), early entry (at the front of the line) and a straight view of the stage. Up to eight people can sit in the box.

Get discounted tickets: You can get free tickets to shows if you volunteer with the venue’s street team. Email [email protected].

Snap an iconic Boulder pic: “The Boulder Theater is renowned for its marquee. Artists and fans alike love snapping selfies with it in the background. The theater features a really cool art deco vibe and is loved by all; Robert Plant considered purchasing it,” D’Agostino Beck says.

Background of the Boulder Theater

The Boulder Theater opened in 1906 as the Curran Opera House. The founder was a billboard sign owner, James Curran, and the venue specialized in silent movies, opera and musicals. After about 20 years of that, the building welcomed its first “talkie” (a film with spoken word).

The opera house stayed open throughout the Great Depression, but it wasn’t until the mid-’30s that the building was renovated and got the murals and art deco facade that it’s famous for today.

The building got another facelift in the early ‘80s, this time transforming the interior into a concert hall that could support big-name bands. Except not. It shut down not even two years after its grand re-opening.

The venue opened back up again in the late ‘80s, as a multi-use space that could also be used for private events and more. But that didn’t work either. A few years later, it died again.

Finally, in 1994, a new owner resuscitated the business again. This time, it stayed afloat, although it changed ownership in 2010.

Since then, it has hosted all kinds of shows. During any given week, you’ll find a community event, a rock show, the performing arts, private company meetings and weddings, D’Agostino Beck says.

“A visit to the Boulder Theater is a great way to experience world-class entertainment in Boulder like a local at one of the most celebrated venues in the country,” she says. “Most of our staff has worked at the theater for years. Strike up a conversation with one of our team members to discover insider tips to Boulder.”

Some of the Boulder Theater’s highlights, according to her: