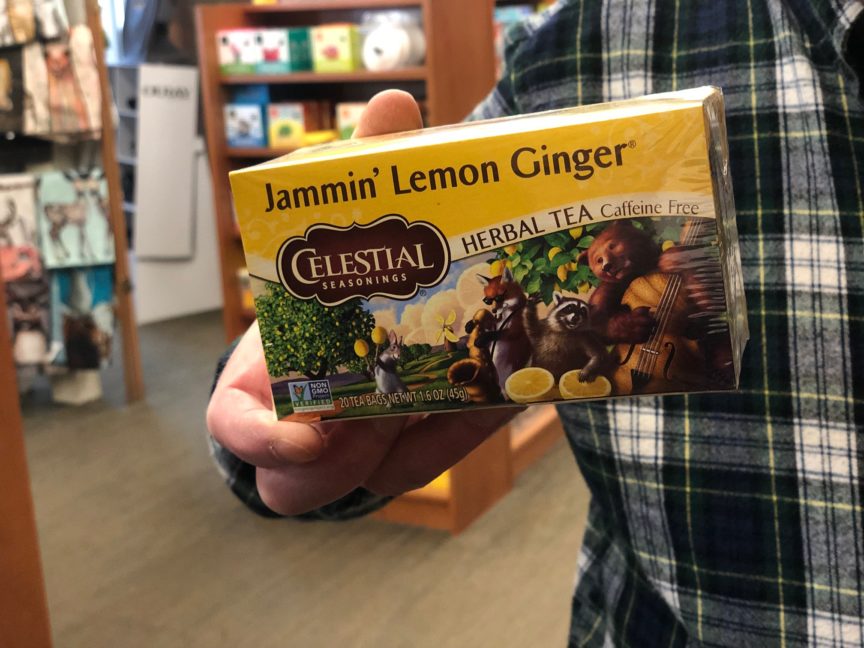 You’ve heard of the American Dream.

This is the Boulder Dream.

It’s the story of how a group of local hikers ended up accidentally founding a multi-million dollar business — a creative industry groundbreaker that would help lead the natural foods movement in Boulder and far beyond.

It’s also the story of how a drum-playing, self-proclaimed Boulder hippie would climb from being a bottom-rung temp worker to being the name and, er, tastebuds of the business.

This isn’t your ordinary cup of tea.

Surely, you know Celestial Seasonings, with its stringless tea bags in colorful, artsy boxes. After all, the business moves millions of pounds of tea every year and is the No. 1 herbal specialty tea in the nation. It’s usually No. 2 among all specialty teas, too.

As you stand in the packed gift shop at the Boulder-based facility and see row upon row of tea boxes, it’s easy to get swept up in the hugeness of it all. Groups of hairnet-wearing visitors file into the full store after completing a factory tour. Other people, arms loaded with teapots, cups and trinkets, file toward the on-site cafe, where you can eat healthy food by oversized windows looking out onto the lawn.

In the corner of the shop, Charlie Baden proudly holds up one box: Jammin’ Lemon Ginger. That’s his favorite blend. And you might want to take his word for it.

As the “blendmaster” of the largest herbal tea company in the United States, Baden knows a thing or two about tea.

He can taste chamomile and tell you exactly where it was grown.

“Every country has its own flavor,” he says. “Same with hibiscus. It doesn’t all taste the same. Not even close.” He laughs. 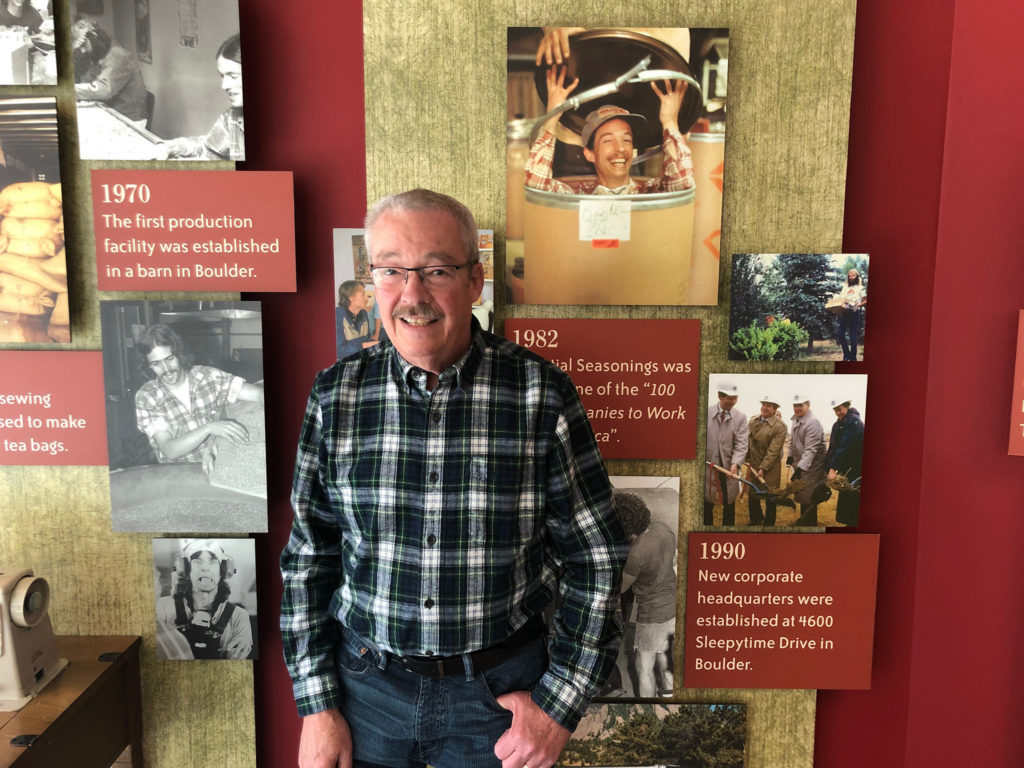 Charlie Baden next to a photo of himself back in the early days of Celestial Seasonings. Photo by Aimee Heckel.

Baden tastes every batch of herbs and botanicals shipped to this plant; all of the tea is made in Boulder, where it all started. He also keeps frozen “gold standard” blends of Celestial Seasonings’ 100-plus types of tea to cross-reference new batches with. Every tea bag should taste exactly the same as every teabag before, he says. This is one of the things that hasn’t changed in the company’s 50 years.

Hippies on a Hike

Celestial Seasonings didn’t start as a business. As the story goes, it started in 1969 with some local hikers, including founder Mo Siegel. They ran across some naturally growing herbs and botanicals, and as hippies did in those days, they picked them and brought them home. Although few Americans were familiar with herbal tea at the time, Siegel and his crew decided to dry out the plants and hand-pack them into tea bags to give to friends and family. (As with seemingly all success stories, this happened in the garage. Of course, right?)

The tea was tasty, and friends urged them to start selling it. They got a few local mom-and-pop shops to carry it and gave it a name: Celestial Seasonings, after the high-school nickname of one of the women on the original hiking trip. Legend is, the kids said she was “so beautiful, it looked like she’d been seasoned from the heavens.” (Probably the nicest high-school nickname ever.) 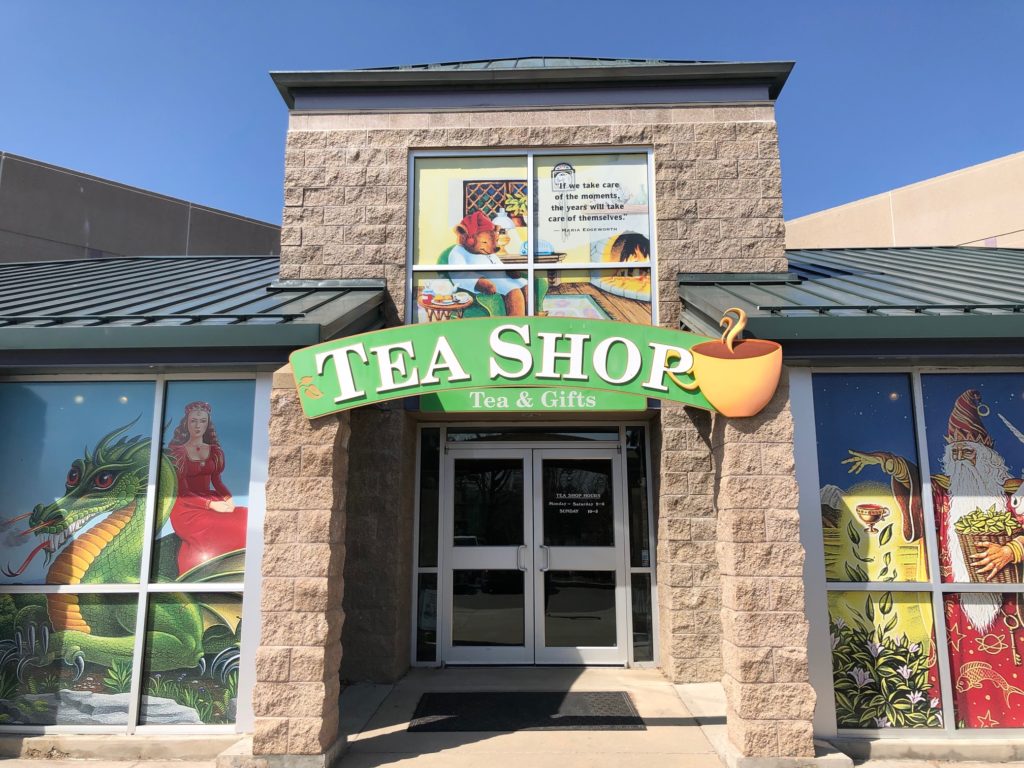 The exterior of Celestial Seasonings. Photo by Aimee Heckel

The company didn’t immediately explode; it grew slowly and deliberately, according to Blair Price, director of marketing for Celestial Seasonings. They decided not to use string and paper on the bags because it was wasteful, and they began using recycled paperboard before it was even a thing. They ultimately switched to a vegetable-based ink. As a Boulder-based company with (literal) roots in nature, the environmental impact was always important, Price says.

In 1972, Siegel took a bus trip to Mexico, where he was introduced to Tilia flowers, used to help with sleep. That was the birth of Sleepytime Tea, which remains the company’s No. 2 seller. The top seller: Sleepytime Extra (a wellness tea with added valerian, for extra sleepier times).

Other things remain the same, too: Many of the botanical and herb suppliers are the same since day one. Those family businesses across the globe (like chamomile from Egypt, black tea from India and Asia, lemongrass from South America) have grown alongside Celestial Seasonings.

The early ‘70s were also when Baden entered the scene — equally as unexpectedly as the results of that original hike.

Baden was a traveling rock-and-roll drummer with long hair to his waist, originally from Maryland. In 1973, he visited a friend near Boulder. And as so many stories go, he says, “I thought, ‘No way am I going back. I’m going to have to figure out life here any way I can.’”

He rented a place on Sixth and Pearl streets for $72 a month, utilities included. 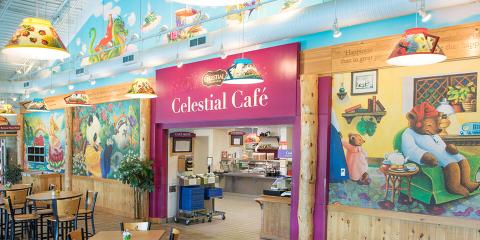 One day, the guitar player from their band asked if Baden could fill in on his job because he couldn’t make it. His buddy’s job: cleaning bails of European blackberry leaves.

Baden’s first response: “Herbal tea? What’s that?” But he needed the cash, so he just showed up to the (obviously super laid-back) factory and began doing the work. He was never actually hired; his friend just gave him his paycheck. The friend didn’t want to come back. So Baden kept showing up.

After about three months, someone finally stopped Baden and said something along the lines of, “I know you’ve been here a long time but who are you and what do you do?” (Only in Boulder in the ‘70s.)

On that day, Baden was hired. (Even today, he has two start dates in the database: as “Bob” on the day after Labor Day in 1975, and as Charlie Baden on Dec. 11, 1975.) He began working in the small company’s manufacturing department, where everyone was new to herbal tea and learning about it together, as consumers continued to demand more.

Baden recalls watching Siegel tasting the tea: “Add more of this, take this out.”

“He was like an expert cook in the kitchen,” Baden says. 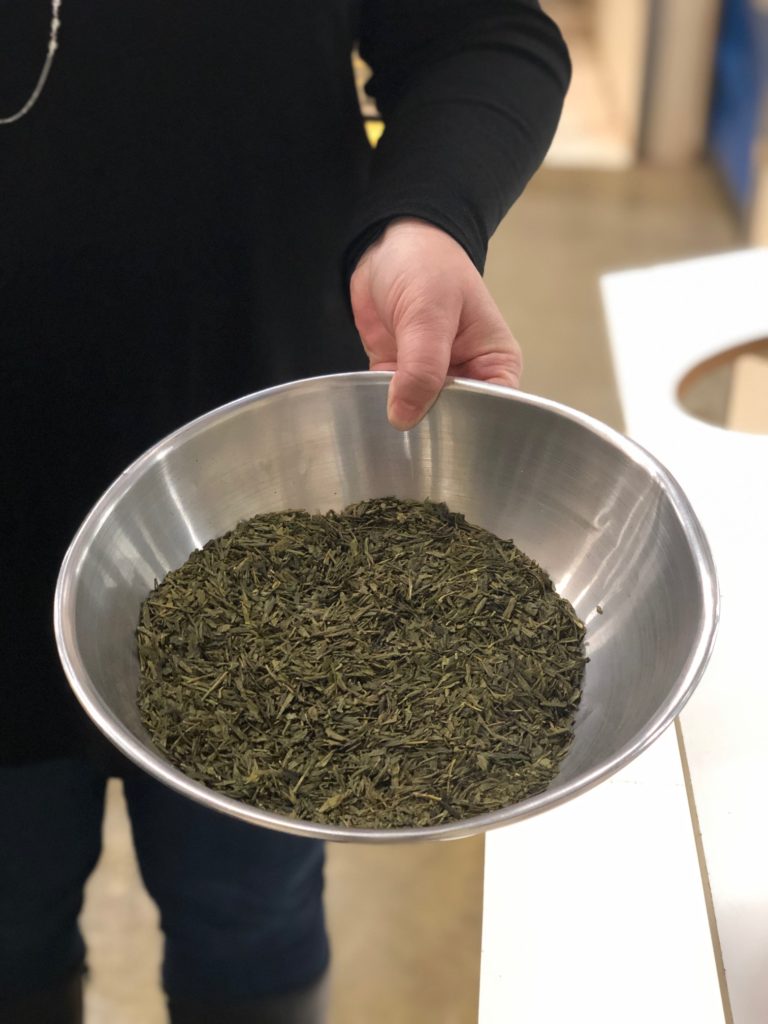 Behind the scenes at Celestial Seasonings. Photo by Aimee Heckel

He studied Siegel and the ingredients, teaching himself the various flavors and scent differences and how everything worked together. Today, visitors can get an idea for the depth of this work by walking through the factory, where every turn has a different scent story. Some bags of ingredients are hidden behind airtight garage doors, like black tea (which can pick up the flavors of other things around it if not separated) and the crazy-strong mint variations. The famous Mint Room will leave your eyes watering and sinuses cleared.

Demand grew and Baden stuck around, and in 1980 Siegel quit his job as blendmaster to focus on running the then-booming business. Self-taught Baden landed the job.

“Those early days were almost spiritual and philosophical,” he says.

Today, 43 years later, tea is his passion; he may not have followed it here, but he found it here. He comes up with a few new blends every year. This spring, there are two new flavored black teas: Cinnamon Express and Peppermint Peak.

His office is filled with old and new boxes and one of the wooden tea display stands from back in the mom-and-pop days. Look at a box of any Celestial Seasonings tea; you’ll see Charlie Baden’s signature on the back of every box. 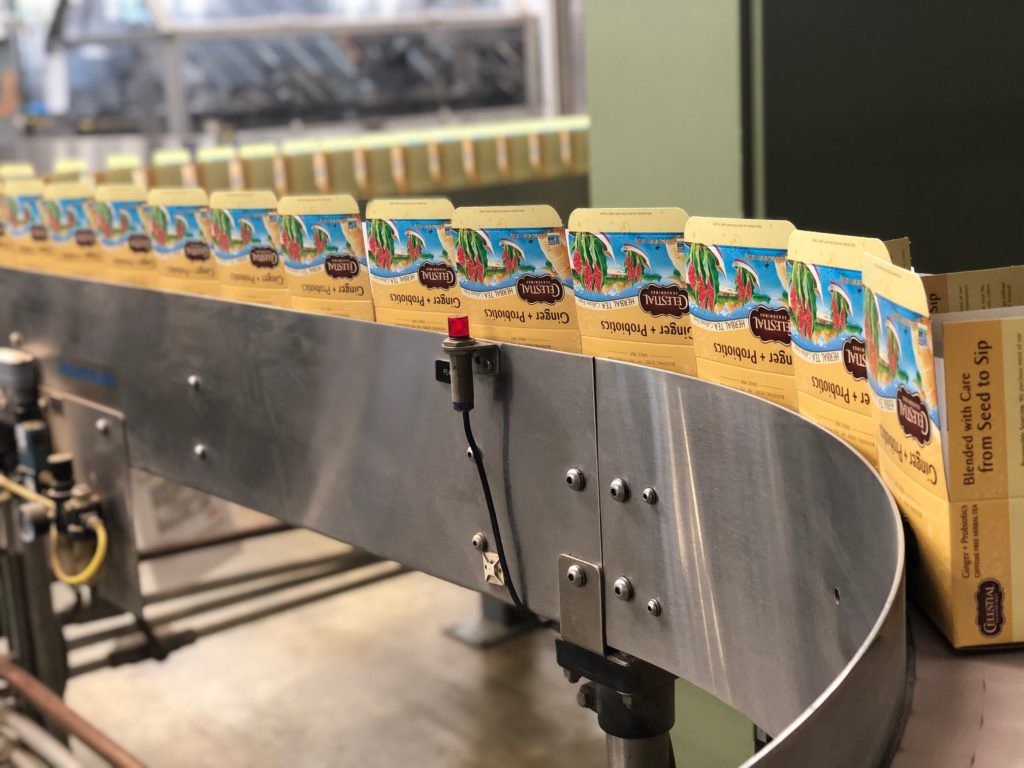 The factory of Celestial Seasonings. Photo by Aimee Heckel

It’s no doubt that Celestial Seasonings led the herbal tea movement in the United States. But Baden thinks the impact has been even greater.

“Boulder is considered the leader of the natural foods industry,” he says, rattling off a long list of big-name brands that started here, from Justin’s Nut Butter to Rudi’s Organic Bakery. “And Celestial Seasonings was the first of them all.”

Some things have changed: Baden’s hair is short, but even then it has to be kept in a hairnet when in the factory. Celestial Seasonings offers much more than just herbal teas; “wellness teas” (aimed to help specific health conditions), such as a ginger and probiotic tea, are a big trend right now.

“We did at one point have to require people to wear shoes while making the tea,” spokeswoman Price says with a chuckle.

But more things remain the same, she says.

“It’s a special place,” says Price. “So much of what we do is the same. Granted, it’s a bigger scale now, but the spirit is the same.” 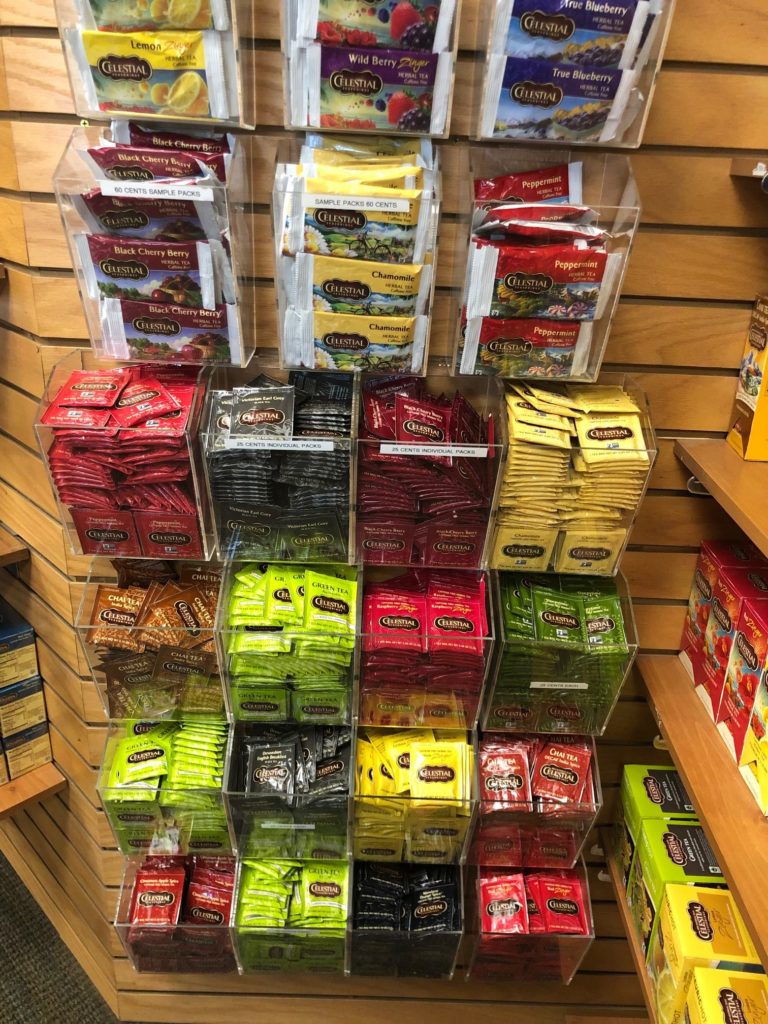 Tea in the gift shop at Celestial Seasonings. Photo by Aimee Heckel

Here are some tips for your visit to Celestial Seasonings, 4600 Sleepytime Drive. About 150,000 people tour the factory every year.

How To Make the Perfect Cup of Tea

According to blendmaster Charlie Baden:

Use distilled or purified water because tap water has varying chlorine contents.

For herbal/zingers/botanicals: Pour boiling water over a tea bag and steep for four to six minutes. Squeeze out the bag and remove.

For black/green/white: Catch water just before boiling or it will cook the tea leaves. Pour over bag and steep for two minutes. Don’t squeeze the tea bag when you remove.