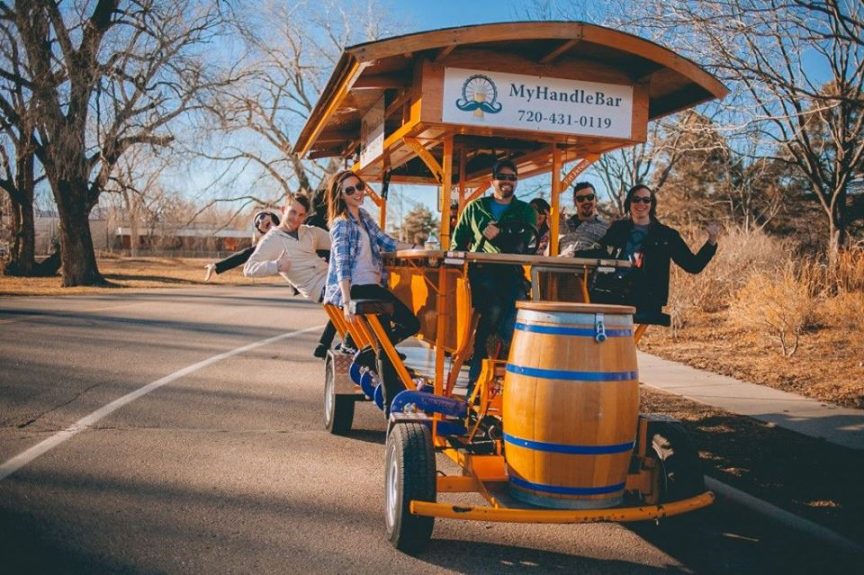 If there are three things Boulder’s good at, it’s beer, bikes and quirkiness. Put them all together and you’ve got the golden Boulder trifecta.

As with many good ideas, this one came from a friendly wager and a sketch on a bar napkin. The concept: a boozy bike cafe. A group of people sitting around a bar counter, on wheels, riding through town from bar to bar. Instead of a bar crawl, it was more like a bar cruise.

This bar napkin grew up and entered reality today as MyHandleBar, a crazy-looking bar bike with multiple pedaling seats. MyHandleBar has seats for 16, although you don’t have to fill it to rent it. You do need at least eight drinking buddies to help pedal. And put your BUI anxieties to rest. MyHandleBar is spearheaded by a designated driver to keep the bike on the course and keep everyone safe. 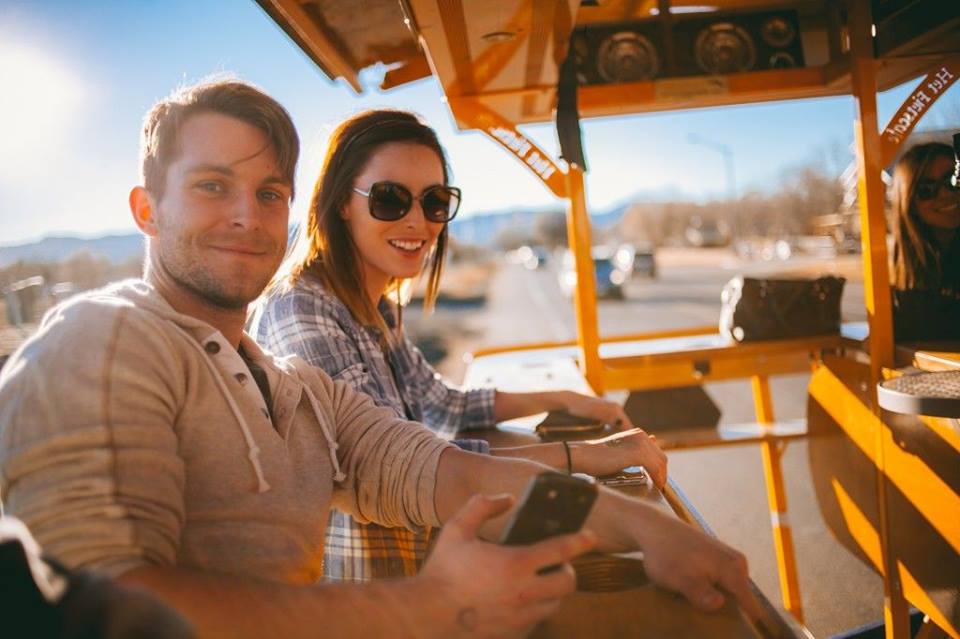 While you can’t bring your cold one on the bike, it’s still a party that you hear coming from blocks away. The vehicle plays music (bring your own or choose from the on-board selection), and riders can indulge in non-alcoholic drinks and snacks. (You can pack a cooler of refreshments, as long as there’s nothing that resembles alcohol.)

It’s a good time to get hydrated between destinations, not to mention burn some calories. While you’re unlikely to burn as many calories as are in a beer (this is no Tour de France), exercising is actually a great way to help your body metabolize the alcohol more quickly and sober up more quickly. Plus, it keeps the alcohol-sopped body awake and alert, according to Livestrong. And there have to be some kind of bonus Life Points for multitasking, right?

If you want to wear a helmet, the company provides them, although they’re not required. 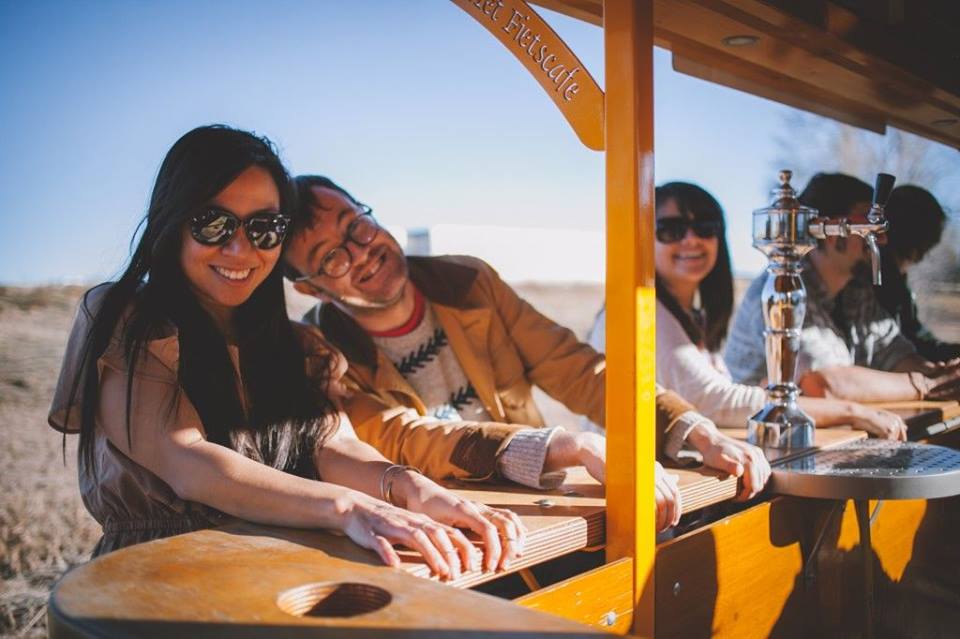 Truly, you can’t miss MyHandleBar, which tends to linger around downtown (like in front of the Rio Grande) — even if you tried, the passengers tend to like waving and cheering, sort of like their own single-float parade, and often there are grounds for the celebration. People like to rent out the bike for bachelor/bachelorette parties, birthday parties, reunions or team-building experiences.

My HandleBar has routes in both Boulder and Fort Collins, Northern Colorado’s two main college communities. In Boulder, you can choose between a variety of different, flexible tour stops along a standard route. Pick up to three bars per tour, depending on how long you want to stay in each. The routes stick around the downtown area and avoid hills, and for good reason. The bike weighs about 1,500 pounds and takes some work to get it moving. Once the momentum helps, things become easier. 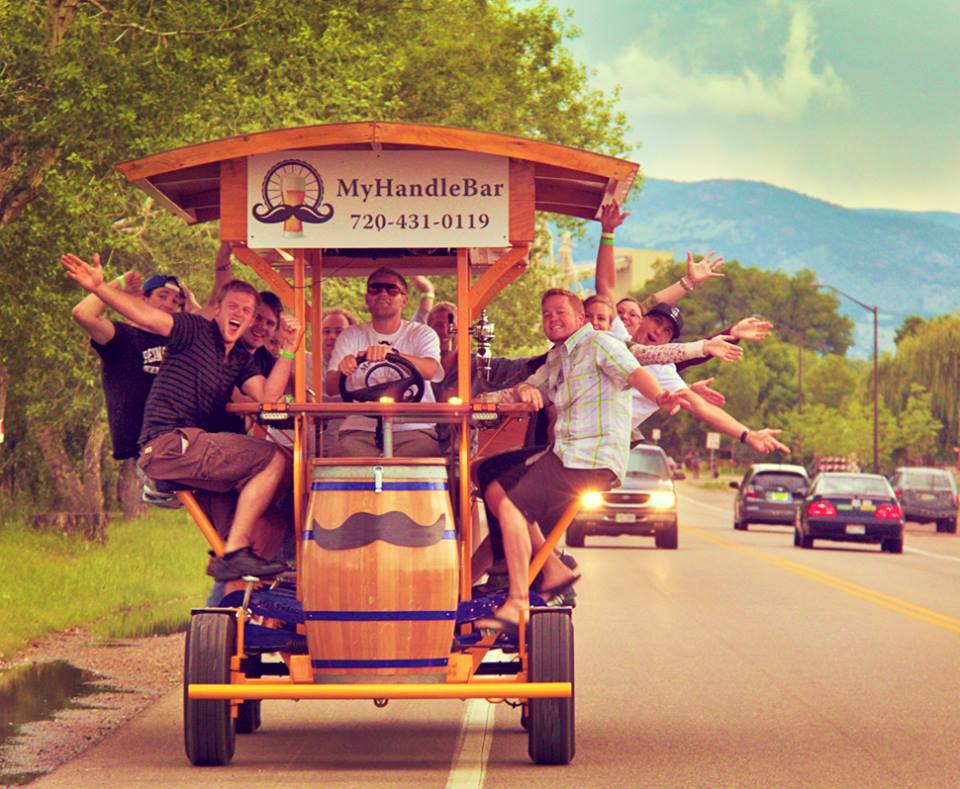