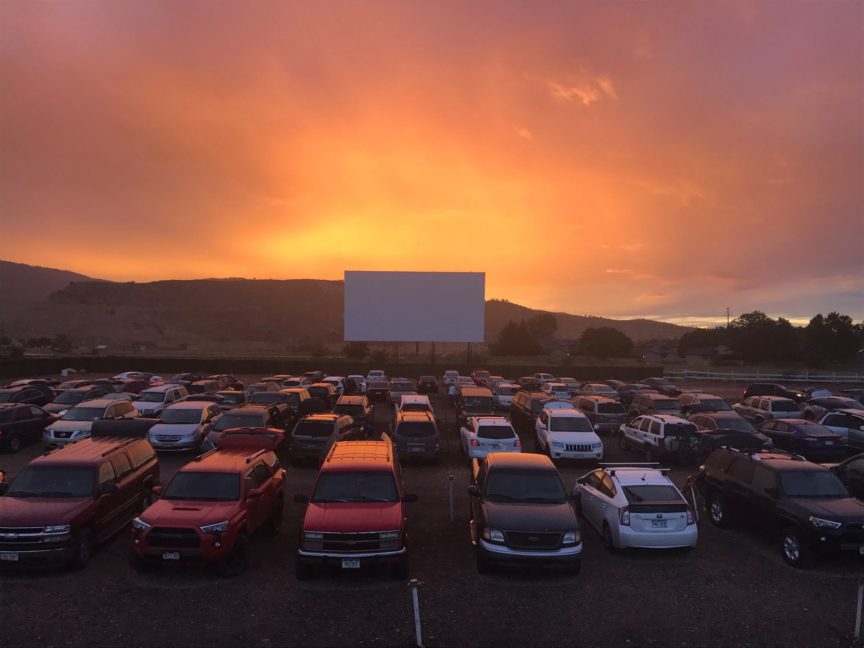 Looking for something to do from the safety and comfort of your car? Drive-in movies, concerts and other shows are making a comeback along the Front Range.

Drive-in movies are an old-fashioned method of entertainment seeing a renaissance as we all seek out socially-distant means to stay safe amid the coronavirus pandemic but also get out and enjoy summer activities.

Now that the weather’s getting warmer in Colorado and more drive-in venues are re-opening, the state is hopping on a trend that’s already become popular in states like California.

“I’m hopeful the industry can return back to more pre-corona times but definitely, for now, it’s fun and it’s a cool way to get people out in a safe way,” said Scott Hachey, a musician who is organizing a two-day music festival at a Fort Collins drive-in this June.

So pad your car with pillows and snacks and check that your radio gets FM waves. Here are several ways to see music or movies near Boulder this summer without ever leaving your car.

The Dairy is hosting its drive-in cinema in the west entrance parking lot, with movies starting as soon as it gets dark. You’ll want to arrive between 8 and 8:30 p.m. to get set up in your parking spot. The Dairy is showing movies on Fridays and Saturdays through early July, with titles like “John Lewis: Good Trouble” and “Stop Making Sense.”

Tickets are $25 and the Dairy is asking everyone to purchase them in advance. For the moment, you can only sit in your car — you can’t walk or bike up and expect to sit on blankets or lawn chairs!

Beanstalk: At the Drive-In — Fort Collins

Tickets cover one guest and one vehicle for an event limited to only 380 vehicles. Vehicles are parking in every other space to allow for social distancing and people to set up chairs outside their cars. The concession stand allows for remote orders — attendees get a text once orders placed online are ready and only then are they allowed to visit the concessions area. Organizers say they’re deploying a careful messaging strategy to ensure everyone knows the rules and that they can be removed from the venue for not complying.

Hachey, the founder and producer of the event, said he picked Holiday Twin for its beautiful location and because it’s becoming a popular site for other such drive-in events.

“I think it’ll be a [trend] for this year,” he said about the explosion of drive-in concerts. “We’ll see if it goes on to the next year.”

The venue has been open since the first weekend of May, one of the earliest drive-ins on the Front Range to open, so owners have had time to gain a wealth of experience with the state and county rules.

“We are half capacity but we are selling out all available tickets every weekend,” according to Holiday Twin. “We have had huge success and support from our customers and very few issues following our current policies.”

Cars are parked every-other spot and concession orders are made online. Rules are also strict about visits to the bathrooms: Only three people allowed in the women’s restroom and two in the men’s at one time.

“ANY violation of our policies will result in being asked to leave the theater,” the venue’s website warns.

Billing itself as “the last remaining original drive-in in the Denver metro area,” the 88 Drive-in Theatre in Commerce City (8780 Rosemary St, Commerce City) had been lobbying the state since March to be allowed to open and finally did on Memorial Day weekend. Commerce City Mayor Benjamin Huseman was on hand to kick off programming, which included food trucks and a band as well as a double-feature.

The venue only allows 250 cars to enter per screening and follows all social distancing guidelines, including encouraging people to stay in or near their cars at all times. Tickets are $9 per person and children under 12 are free.

Denver Mart Drive In (451 East 58th Ave., Denver, CO) is showing double features every weekend from Memorial Day to Labor Day. Family-friendly selections include “Trolls World Tour” and “Onward.” Tickets are $10 per person and children under 6 are free.

Interest is so high that Memorial Day weekend sold out and upcoming tickets are going fast. The cafe is not open, but that means outside food and beverages are welcome in the comfort of attendees’ vehicles.

“The biggest challenge is keeping people inside their cars,” she told KDVR. “They really enjoy that feel of getting out.”

Other Drive-In Events Happening This Summer

Organizers are asking attendees to follow strict social distancing guidelines, including only using bathrooms for “emergencies.” There will be no alcohol or drugs allowed at the event, likely to encourage following the rules.

“Grab your quarantine crew and rage safely in the area inside and around your car while respecting others’ space. Each vehicle has a clearly defined space to stay in and vehicles are placed 10-12 feet apart,” according to the event website.

Electronic musician Marc “Loop Daddy” Rebillet is embarking on a national “drive-in tour” including a stop in Colorado at the Holiday Twin Drive-In on June 22 and 23.

“I know that we’re hungry for live entertainment,” Rebillet said in his announcement on social media. “That’s right, I am coming to drive-in movie theaters.”

“The tour will forgo traditional opening acts and will instead embody a standard drive-in movie experience by showcasing short films,” according to the event website.

Among the other familiar social distancing rules — including no alcohol — cars can only have their windows rolled down 2 inches from the top.

“We are getting in the tour bus and hitting drive-in theaters across the country,” he said on Twitter. “Don’t worry, we are adding shows as the tour builds. We’ve already added late shows to Fort Collins.”

The #HotSummerNights Drive-In Tour is officially a go!! Late Shows ALREADY ADDED in Indianapolis and Fort Collins. Tickets at the https://t.co/8I9x9OQv0X. pic.twitter.com/TR2jdAhbMs

The Holiday Twin’s usual social distancing rules apply. “We encourage carpooling ONLY with people in your immediate quarantine circle,” the website notes.

The comedy show is for 18 and over only.