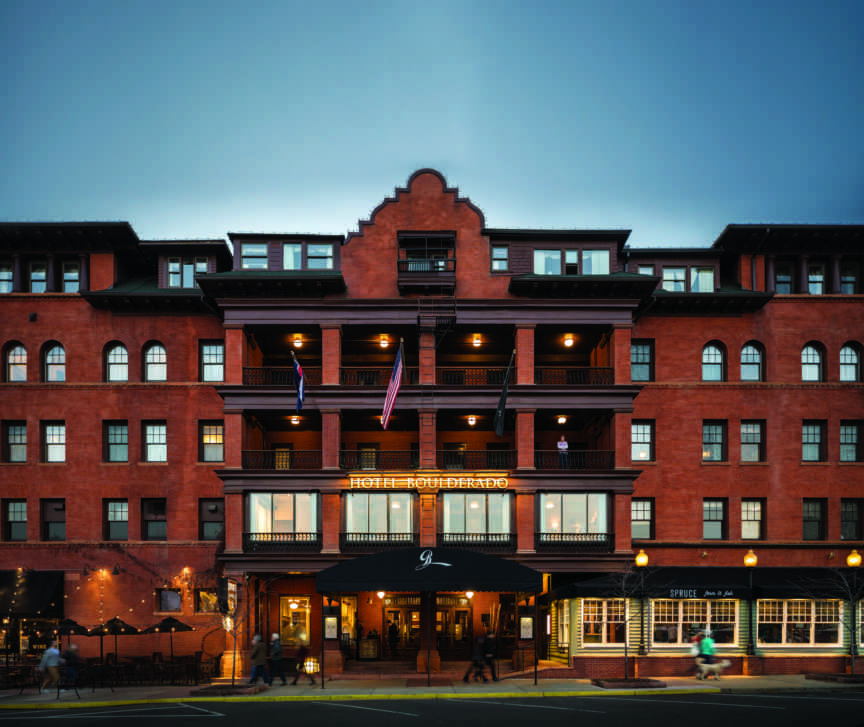 Boulder’s oldest hotel is gearing up for an epic birthday party.

The historic Hotel Boulderado will turn 110 this New Year’s Eve. The hotel is gearing up to sell a limited number of tickets to quite the opulent birthday party, complete with ice carvings, an extensive buffet, champagne, live music and a dramatic balloon drop at midnight. The band will play progressively newer music throughout the night, starting with Big Band music and working through the ‘50s, ‘80s and today.

The hotel opened on New Year’s Eve 1909, way back in the days of horses and buggies and is one of the best hotels to stay at in Boulder.

. And in honor of that, it holds and annual NYE bash. In year’s past, the party has had different themes, like a Great Gatsby theme last year. But this year, for the big 1-1-0, the celebration is just a big, grand gala, black-tie optional, and the hotel has cut the number of tickets to 130. That’s not even two-thirds of what it usually is. 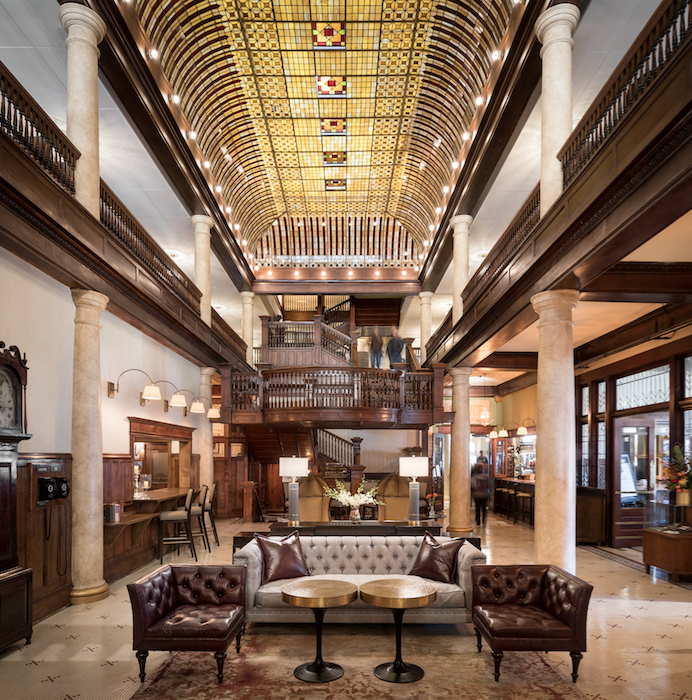 The interior of the Hotel Boulderado. Courtesy photo

“We want it to feel so special,” says Michele Rittgers, director of sales and marketing for the hotel. “This year, we want to accentuate the fact that it was the first luxury hotel in Boulder, and we’re still an iconic, luxury hotel 110 years later.”

Tickets are high-tier, too, at $235 per person, although that includes a cocktail hour, the buffet, champagne toast and dancing all night. In addition, gala-goers get a discounted room rate if they decide to stay (starting at $159 per night instead of $279).

The Boulderado, at 2115 13th St. in downtown just a block off the Pearl Street Mall, is about as Boulder as Boulder gets, and this hotel helped shape Boulder into what it is today. 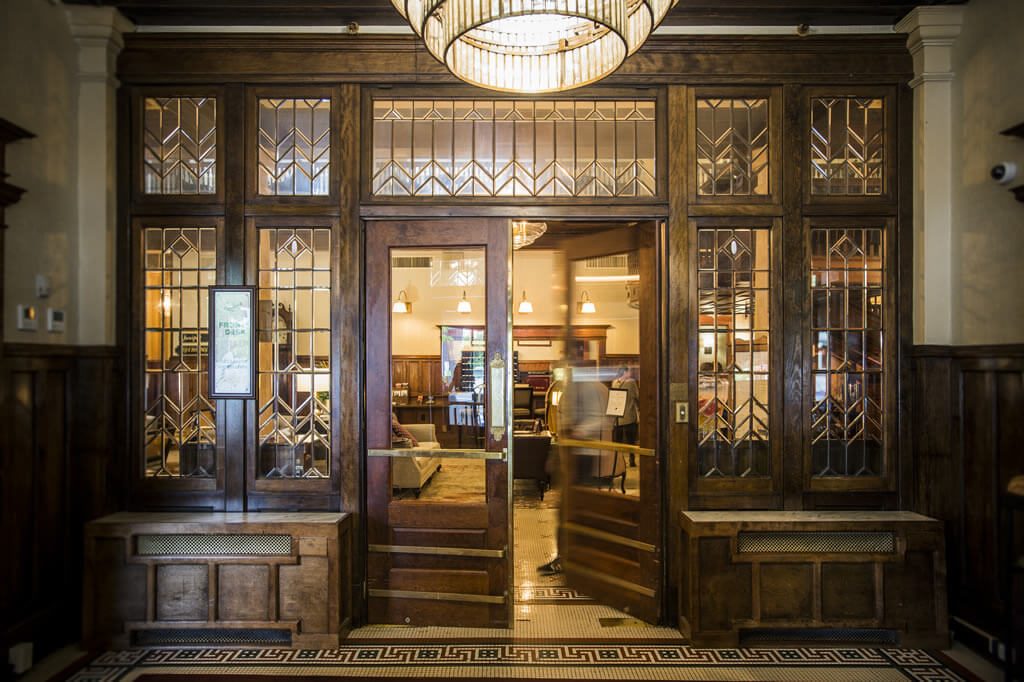 The entrance to the Hotel Boulderado. Courtesy photo

How It All Began

Back when the Boulderado opened, Boulder was tiny, home to about 8,000 residents (compared with 108,000 today) and a whopping 26 automobiles.

There was railroad traffic, the University of Colorado (whose school system started in 1876, even before Colorado was a state in the union) and the Colorado Chautauqua (which is still running today).

Town leaders realized Boulder was growing, but they didn’t think it was growing quickly enough. They thought they could boost the growth and improve Boulder’s image with a first-class hotel, Rittgers says.

“The Boulderado was specifically designed to be an anchor point in Boulder and help Boulder grow, and over the years, it has done exactly that,” she says.

Much of the red brick that characterizes downtown Boulder was likely inspired by the Boulderado’s red-brick exterior, she says; when it opened, the streets weren’t even paved. The hotel was designed by local architects William Redding and Son. The exterior is five stories high, a fusion of Italian Renaissance and Spanish Revival architecture.

A lot of Boulder, as we know it today, was undoubtedly inspired by the building itself — the shape of the architecture and how it looks and feels — but it also brought the outside world into Boulder back before travel was common, Rittgers says.

“It brought big names to Boulder. It helped put Boulder on the map,” she says.

The hotel was designed to be top-of-the-line; hotel info from the ‘20s said that “every guest may expect the best and get it.” The name is a fusion of the words “Boulder” and “Colorado.”

The Boulderado is on the National Register of Historic Places, the Historic Hotels of America (of the National Trust for Historic Preservation) and is an official landmark of the City of Boulder. 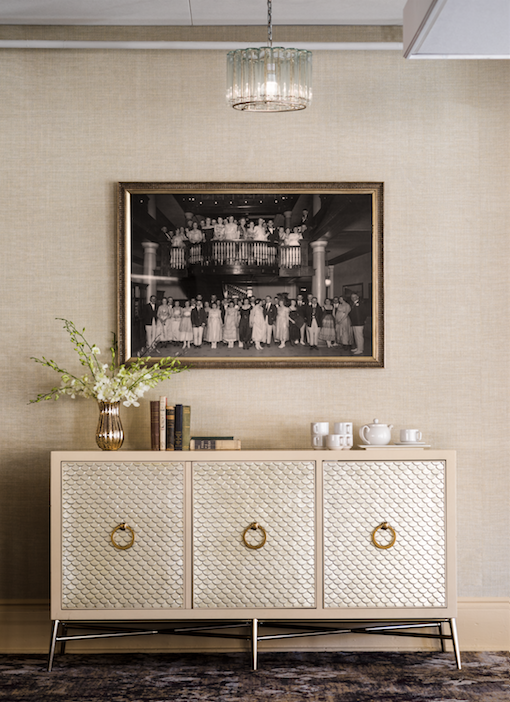 Inside the Boulderado. Courtesy photo

Over the years, the hotel has retained a ton of its turn-of-the-century charm, including the same exterior architecture, a still-functioning (albeit tiny if not slightly nerve-wracking) original 1908 Otis Elevator, a stained glass ceiling in the lobby, the same cherry-wood staircase, old accents throughout (like a drinking fountain that spouts water from Boulder’s own glacier) and Victorian decor in some rooms and community spaces.

In addition, you can still see the first guest register on display in the main lobby. Ask the concierge for info on the free, self-guided history tour, which is on the third floor of the main wing. The hallways are lined with antique furniture and artifacts like a museum.

The basement of the hotel is a speakeasy-style bar called License No. 1, a hark back to its own history as the first bar in Boulder to get its license reinstated after the Prohibition. Find traditional cocktails here, in a setting that feels like a shot back in time. If only there were flappers.

“A lot of what you see is original. All the wood you see is all original cherry wood, the brick on the outside is the original brick and some of the stained glass on the ceiling is from the original ceiling,” Rittgers says.

The impressive ceiling was modeled after the Palace Hotel in San Francisco before it was damaged by an earthquake, she says.

Boulder had its own natural disaster strike, too. In 1959, a heavy snowfall broke a skylight of the Boulderado. The skylight fell and damaged a section of the ceiling, so owners decided to remove the entire stained glass ceiling and replace it with Plexiglass. That didn’t last long. In 1977, they decided to design a new ceiling to bring back the feeling of the initial one. They used panels from the original ceiling to recreate the colorful display again. After a $65,000 renovation that finally completed in 2004, the ceiling you see today looks exactly like it did when the hotel was first built, Rittgers says.

Overall, the hotel has maintained its original status and prestige; rather than falling into disrepair and off the luxury-travel radar, like many older properties do, the owners have maintained a “willingness to do what they need to so it remains a gem in Boulder,” Rittgers says. “The owners have incredible pride in both the building and the city of Boulder.” 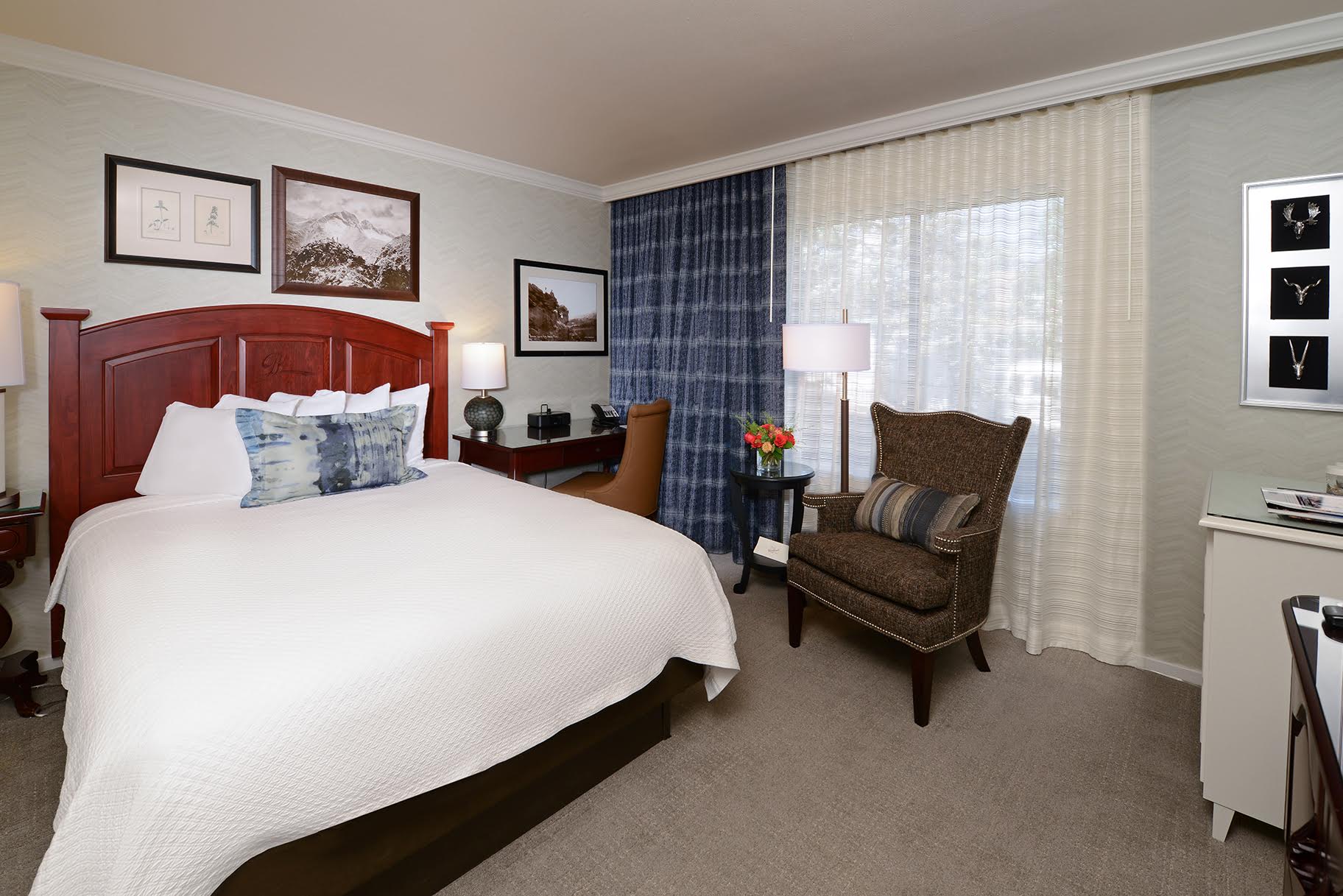 A modern room at the Hotel Boulderado. Courtesy photo

Changes Over the Years

But in 110 years, naturally, some things have changed.

The hotel expanded and renovated countless times, most notably by adding the north wing in the mid-’80s. Although newer, it was carefully designed to mesh with the historic section of the hotel, using dark cherry wood and another stained glass ceiling.

More recently, the lobby and meeting spaces were revamped, the reception desk was moved and all the rooms were upgraded. Today, the lobby is more of a lobby-lounge, where you can catch live music on Friday nights, sip coffee while plugged into the workspaces and people-watch.

“When you have a historic building, you’re almost always doing renovations. There’s almost always something to improve upon,” says Rittgers.

Today, you can choose between staying in the historic wing, in the main hotel, or the modern wing. (Here’s the scoop on comparing the two.) To access the contemporary rooms, you take an indoor bridge to the north corridor. Even the historical rooms have free wifi and cable TV (which feels a bit out of place amid the antique furniture).

Other modern amenities in both styles of rooms include Aveda bath products, Egyptian cotton linens, a limo or town car service, laptop workstations in the lobby-lounge, electric-car charging stations, cozy bathrobes and the Boxcar Coffee shop in the lobby, serving locally roasted joe. The on-site restaurant, Spruce Farm and Fish, serves a modern menu of farm-fresh food that you probably wouldn’t have found in Boulder in the 1900s, like a quinoa bowl for breakfast (although the steak dinner is pretty traditional).

So while the building is historic, it’s not exactly like stepping back in time to 1909, Rittgers says.

“There’s a lot of hotel competition in Boulder, and I don’t mind it at all; every hotel in the city is unique,” she says. “The one thing, besides its location being a block off Pearl, is we are iconic Boulder. If you want the iconic Boulder experience, the best Boulder hotel to stay at is: the Boulderado.” 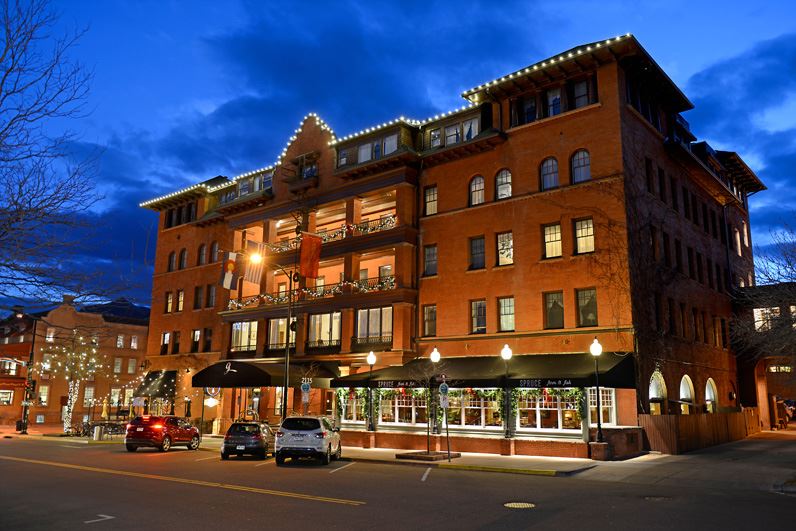