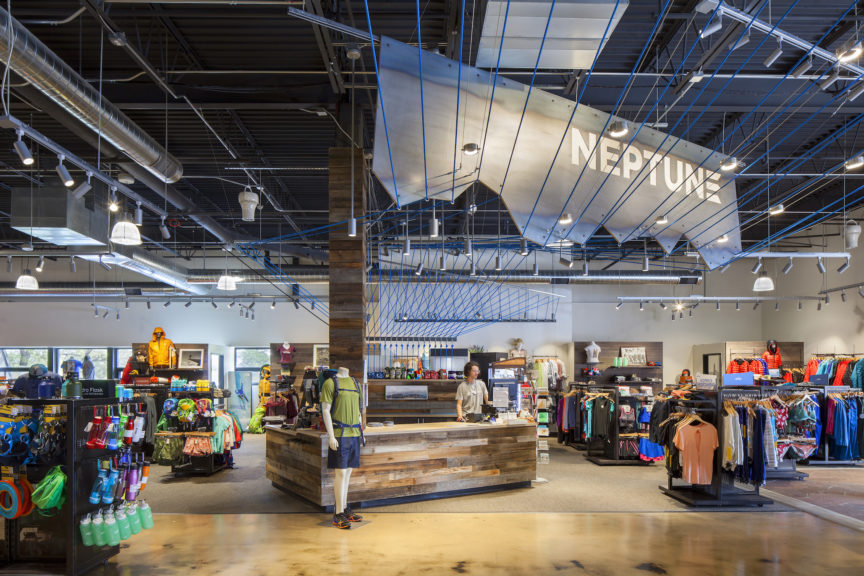 It started out as a small hangout for people who like to explore the outdoors.

Nearly 50 years later, it has grown into a Boulder institution — an outdoor adventure mecca that’s known around the globe, complete with an on-site history museum, a cafe and bar and special events and clinics featuring world-renowned experts in the field.

Neptune Mountaineering is so much more than an outdoor equipment shop.

Of course, that’s what draws many people into the doors to begin with. Neptune, at 633 S. Broadway in Boulder, is known for carrying all the climbing, skiing, camping and hiking gear you could possibly want (as well as things you never knew you wanted but now that you know they exist, you must have them). Find books, maps, shoes, clothes and everything from crampons to climbing packs to crash pads. Rent rock climbing gear, get your boots fit and tune your skis.

Neptune Mountaineering claims it has one of the largest (if not the largest) selections of climbing gear in the country. Plus, the shop is located directly off a trailhead in front of the Flatirons.

After shopping, stay and play. Get recommendations on where to go and what to do to prepare from the highly knowledgeable staff, all avid skiers, climbers and mountaineers themselves. For example, one Google review of the shop in September came from a climber who got stuck on Longs Peak and was unsure where to go. When his phone caught cell service, he called Neptune Mountaineering for advice. The staff knew the mountain so well, they were able to help him find the way back down.

Reviewer Alex Mandrila wrote: “Thanks to Jon Klothe whose beta got me down to Mills in one piece, and though I didn’t need to call back was willing to follow up until I found everything. This is just one reason I’ll always be a customer here, because experiences like this one show Neptune staff cares.”

Yeah. This place is the real deal.

After befriending the staff here, shoppers can also meet other like-minded people over a cup of locally roasted coffee or a locally brewed beer. (During social distancing times, the outdoor cafe remains open.) Neptune not only encourages its shoppers to stay awhile, but that’s the foundation the entire business was built upon, says Neptune spokeswoman Amy Wansing.

‘Where Anyone in the Outdoors Wants to Be’

In 1973, Gary Neptune, an avid skier and climber who went on expeditions all over the world, founded Neptune Mountaineering to connect with other adventurers in the area. Back then, it was more of a specialty store that emphasized equipment for serious athletes.

The store grew over the decades to widen its selection for all experience levels, even visitors and newbies.

“This year especially, we have noticed more people wanting to get outside,” Wansing says. “We’re seeing a lot of new faces in the store looking for advice on how to camp with their family and getting started in new hobbies and activities.”

Whereas Neptune Mountaineering may have felt a little intimidating to the regular camper in the past, that has changed, she says.

“In the past, it was for serious gear junkies, but it has evolved to definitely be a place where anyone of all levels in the outdoors wants to be,” Wansing says.

In 2013, Gary Neptune retired. The store was run by another retailer for a few years, before it was bought by local climbers Shelley and Andrew Dunbar in 2017. They did a mega remodel, added a cafe and turned the artifacts that Gary Neptune had collected over the years into a curated museum.

It’s now one of the largest collections of mountaineering artifacts in the world. Wansing says it’s on a global list alongside museums in Italy and France with relics of early climbing and skiing gear. 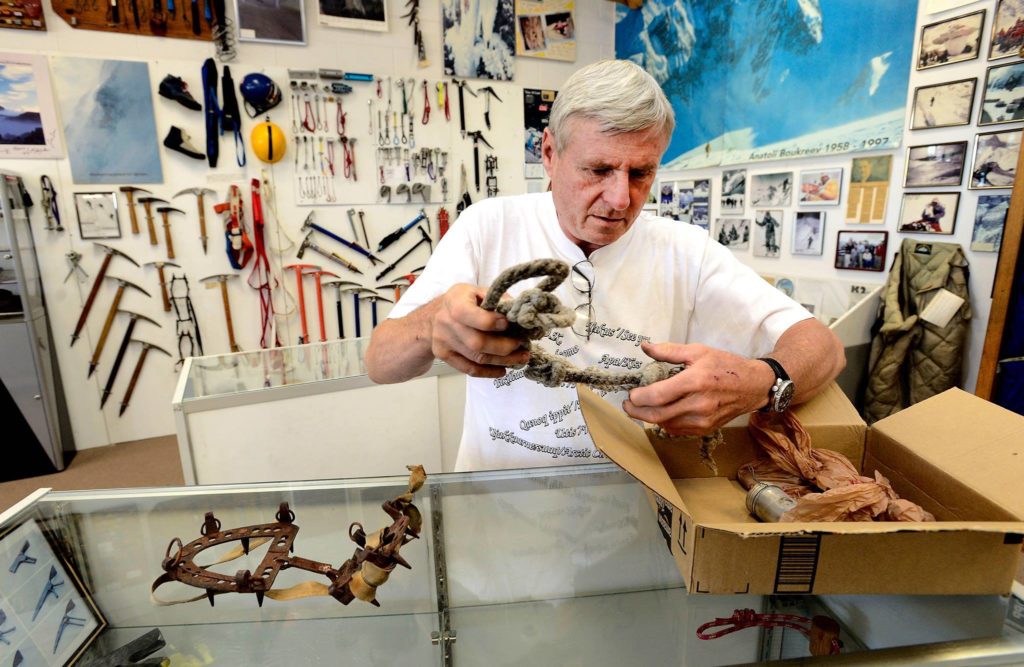 In Neptune’s collection, you can see expedition suits from early trips up Mount Eiger and Mount Everest. Look at some of the first ski boots ever made, dating back to the early 1900s. Appreciate the science of modern skis next to antique skis (which were really just basic wooden planks). And imagine using the simple climbing hardware mountaineers used to use, back when they ascended the rock without pulling on anything except the natural features, Wansing says.

“Things are so incredibly safe now in comparison,” she says. “To see the evolution of what was used as a rappel device or belay device — it really has come a long way. You get a lot of appreciation for the people who did the early climbs with not much more than courage.”

Many of the artifacts came from Gary Neptune’s personal collection. He was fascinated by the history and wanted to understand how early mountaineers made their expeditions, Wansing says.

“Sometimes, he liked to use it himself or use replicas to get a true understanding of that experience from their perspective,” she says.

He began bringing the artifacts from his home into the shop and, over time, people began sending him more gear from all over the world.

Today, the artifacts are in beautiful display cases throughout the store, organized by theme. Staff is currently working on creating a self-guided tour (perhaps with a smartphone feature) where visitors can listen to Gary Neptune explain the history of the various displays.

“We want to preserve this tradition of Boulder being at the center of climbing and mountaineering,” Wansing says.

A Place Where You Can Learn

Another way the store solidifies its reputation is through its special events. In fact, in pre-coronavirus times, that’s what Neptune Mountaineering was best known for. This fall, events have slowly begun picking back up, part in-person and part virtual.

The store has hosted avalanche awareness clinics, backcountry meet-ups, happy hours and presenters sharing stories about recent trips or about specific topics (such as, you know, climbing volcanoes). Some of the most popular events in the past featured Conrad Anker, a renowned American rock climber, mountaineer and author, and Lynn Hill, the first person to free climb The Nose on El Capitan in Yosemite Valley. 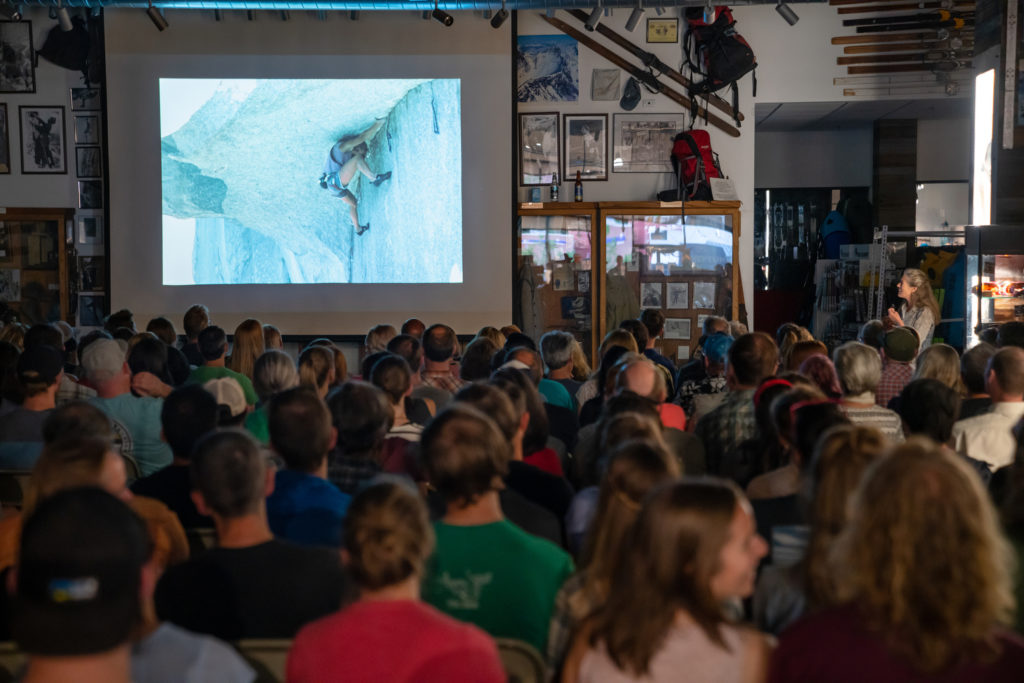 Neptune has also highlighted local skiers and guides offering tips and inspiration about their conquests.

All of this cred, and Neptune Mountaineering remains a locally owned, small business. This matters to Boulder, Wansing says.

“Neptune plays a mentorship role for many people,” she says. “It’s one thing to have the gear, but it’s another to have the people who can tell you how to get into a sport and how to advance in your sport — not just a place to gather, but a place where you can actually really learn, as well.”

The Neptune Cafe and Bar

One of the most unique features of Neptune Mountaineering is its on-site cafe and bar. With social distancing requirements, some of the offerings are limited, but during normal business, you can gather inside on the long, community table or outside on the patio. The cafe serves burritos, paninis, soup, waffles, salads, sandwiches, cupcakes, bread and baked goods from local businesses Spruce Confections and Kim and Jake’s Cakes.

In the morning, you can sip locally roasted Ampersand Coffee and various teas, and as the day goes on, switch to sipping local beer and kombucha from four rotating taps. You can also find wine, cider and other non-alcoholic beverages.