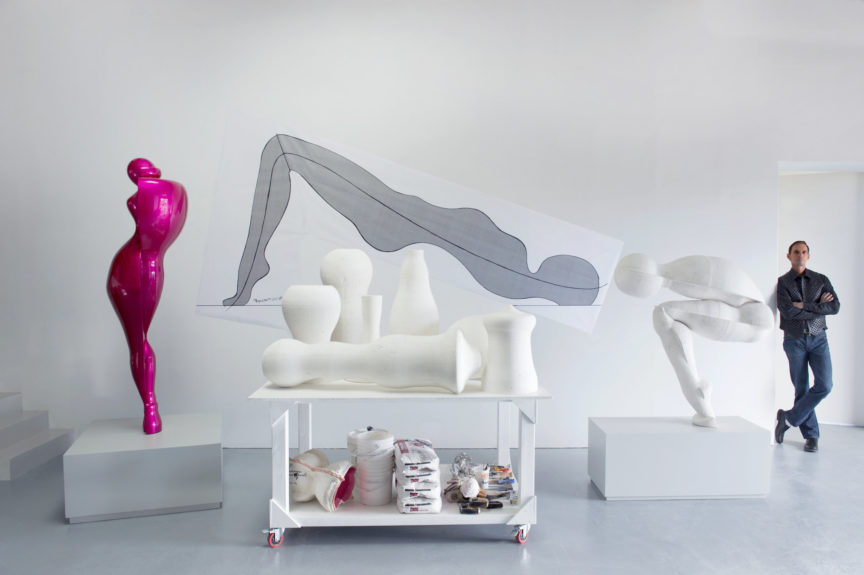 Roger Reutimann’s large-scale sculptures are owned by celebrities, from actor Neil Patrick Harris to CNN’s Anderson Cooper. Sir Elton John owns four of them and has been quoted saying he was “blown away” by Reutimann’s work.

But the Boulder-based artist won’t bring up those names unless he’s asked. That’s not where he stakes his satisfaction.

He says his proudest accomplishment is to have found his own original artistic style.

“That’s the most difficult thing to achieve, something most artists will never find,” he says. “You have to be brutally honest with yourself and not be influenced by other people.”

Reutimann’s large sculptures (most are seven or eight feet tall, but the biggest reached 20) are figurative-abstract, often brightly colored and like nothing he says he’s ever seen before, anywhere in the world. Not even when he helped run the world’s largest contemporary art fair in Europe. Reutimann comes from Switzerland, where he majored in economics before attending a culinary institute, working in hotels and launching his own modern light-fixture design company.

He never studied art and began his career as a sculptor relatively late in the game, around his mid-40s, old enough to no longer be alluring to big-name galleries who want to invest in young, lifelong artists, Reutimann says. 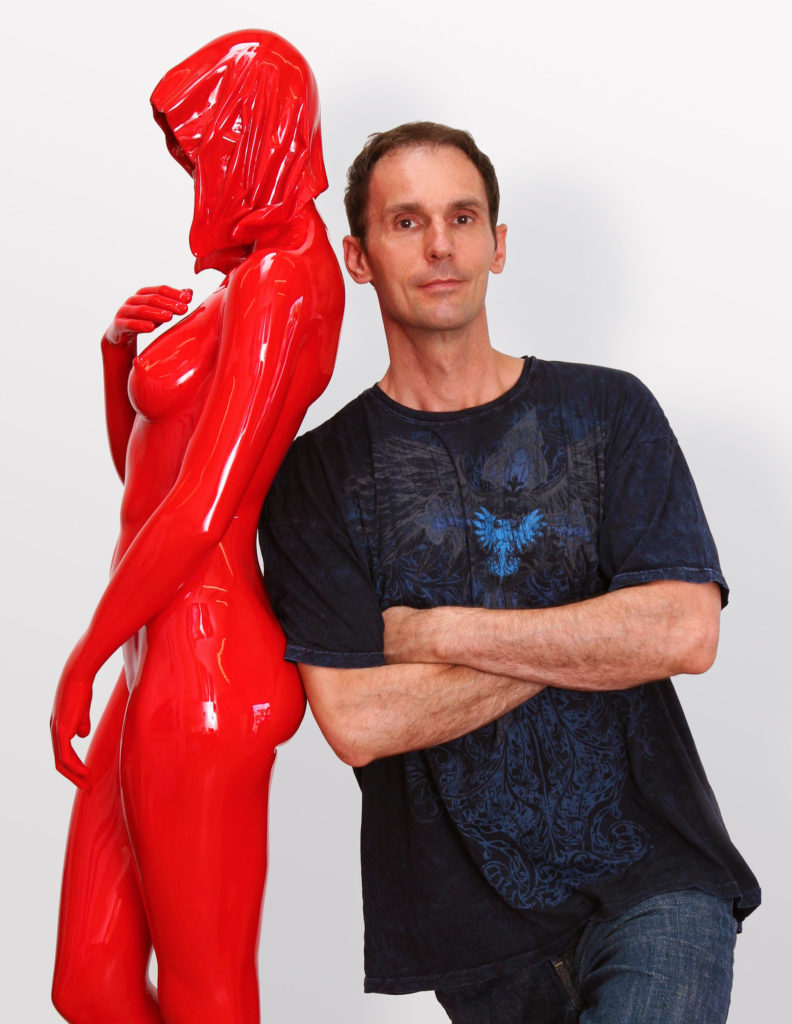 Roger Reutimann and one of his sculptures. Courtesy photo

But galleries have never been his thing, anyway. He says he’s more interested in landing spots in busy, public spaces, like high-end hotels and cruise ships and public parks. He says he’s not interested in hiding his art inside quiet museums, but instead making a statement where it can reach many more people.

Indeed, this self-taught artist has carved out his own pathway to success. And perhaps it’s thanks to that nontraditional route that he discovered his sculpture style. Even a casual passerby can identify a Reutimann, once you’ve seen one.

In Boulder, it’s “Aphros,” at the Dairy Arts Center.

This nearly seven-foot-tall, shiny, fuchsia sculpture was inspired by the famous, 2,100-year-old Greek “Venus de Milo” sculpture of Aphrodite at the Louvre in Paris. Only Reutimann uses fiberglass and automotive paint to make a point.

“With this series of figurative-abstract sculptures I am showing that there is no fixed physical reality, nor single perception of the world,” he explains. “I am challenging the viewer by presenting dialogues of perception versus reality.”

As you walk around the sculpture, the different viewpoints transform the piece.

“There is no single truth,” Reutimann says. “There is only perception. These works of art meant to be mediators of the inexpressible truth.”

This is one of the rare Reutimann sculptures you can see in Colorado; others live in private residences of art collectors. If you venture to Denver, you can see pieces at the Jacquard Hotel in Cherry Creek and the Arvada Center for the Arts. Most of Reutimann’s work is bought and sent overseas or to big cities (New York, Los Angeles, Miami). Many institutions don’t have space for his work, he says.

Working in large sculpture has its share of challenges in logistics and engineering. Some sculptures need internal reinforcement. An average eight-foot sculpture weighs about 500 pounds, plus another 300 for the base. When shipping a sculpture, whether for sale or for an event, the final package can weigh upwards of 1,000 pounds, which must be shipped via plane. (Reutimann has had several sculptures “lost” on a ship, so that’s no longer an option.)

But the size has its advantages, too. He says large work is more likely to be chosen for a public collection and display, and they’re durable — not a liability for hotels if, say, a child climbs on top. (He’s seen that happen.)

Reutimann moved to Boulder about 13 years ago. He says the mountains reminded him of Switzerland, he liked the cultured and educated environment without having to live in a big city, he appreciated the four seasons and Boulder was conveniently close to Loveland, the center of sculpture in the United States — and where he gets his sculptures cast at a foundry. All of his work is cast. 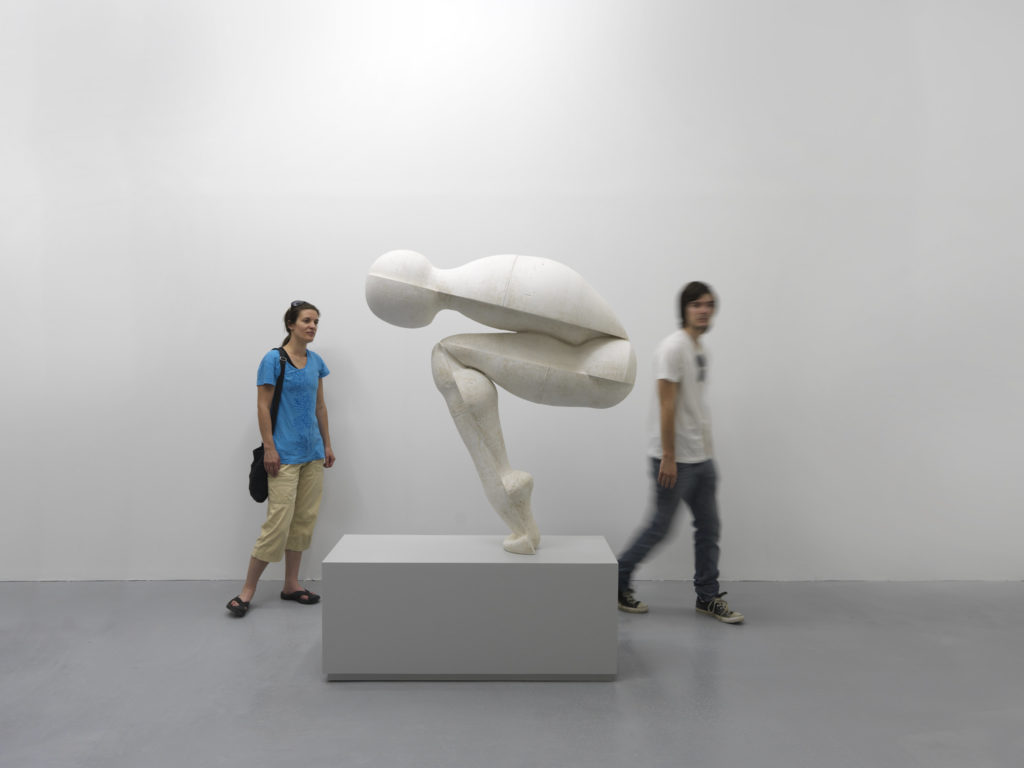 “It’s not an easy process and is probably one of the oldest ways of fabricating that’s still preserved,” Reutimann says. “It hasn’t really changed much since the Roman or the Greek era.”

But he adds a modern twist. Reutimann blends these ancient methods with modern forms and materials. He finishes his work with high-gloss automotive paint.

He does it all himself (usually with an assistant or two) in his east Boulder studio, except for the actual casting of the metal. This is rare. Most artists sculpt something and bring that to the foundry; the foundry makes the mold, wax, welds it, does the patina, welds it to the base and the artist gets the finished sculpture back, he says.

“I find it important to be able to do all that yourself,” Reutimann says. “The process of doing it gets you to new ideas.”

He even learned how to apply automotive paint himself, finished with a clear coat on top. In addition to looking different than typical patina-finished sculptures, the paint job lasts as long as a car and contains a UV filter, which keeps the color vibrant for longer.

“Colors in nature are such a big contrast. If you have a garden or park setting and you have patina, they blend into the landscape, which in some cases might be desired,” he says. “But I want my work to stand out. I want that contrast to nature. That’s what makes it so interesting. It’s kind of not supposed to be there. It throws you off a little bit.”

Plus, he says, why should painters be the only artists who get to experiment with color? 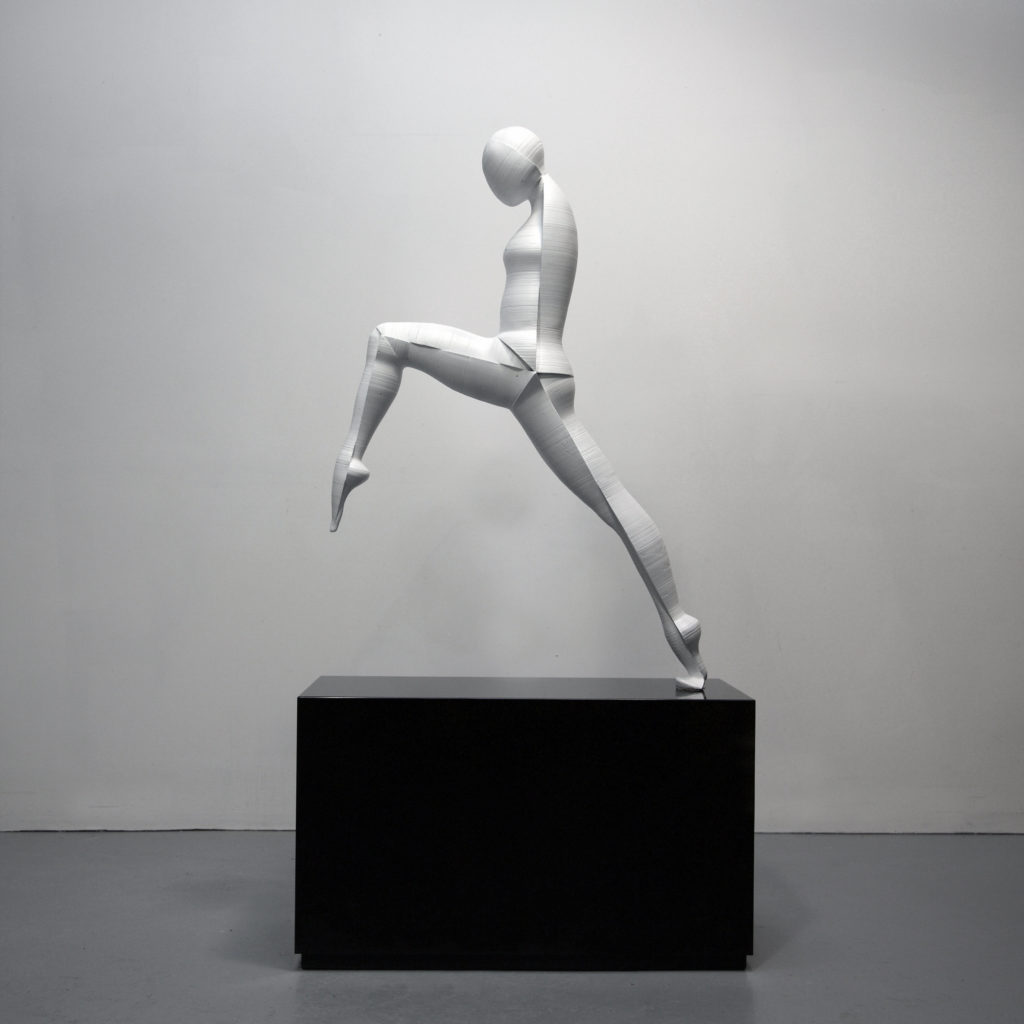 A Roger Reutimann sculpture. “With this series of figurative-abstract sculptures, I am showing that there is no fixed physical reality, nor single perception of the world,” Reutimann says. Courtesy photo

Reutimann’s sculpting began with the human form but quickly took on an abstract quality when he learned how unwelcome nudity in public art was in the United States. Today, much of his work still suggests the human form, but with a focus on simple geometric lines; “the purity of shapes,” he calls it.

Another unique quality of Reutimann’s sculptures is their bases. Most recently, instead of traditional stone bases, he has begun making white concrete bases out of a fabric mold. The fabric imprints an organic texture into the concrete.

He says he has always been drawn to abstraction. While he considers himself a figurative artist, he says he’s not a realist. He thinks when you copy something that already exists, the artist becomes just a craftsman.

“With abstract, you have much more artistic freedom and can develop your own style,” he says. In that, he says he’s grateful he never went to art school. Ideas can corrupt you, he says. “You can’t learn to be an artist. Either you are or you are not.”