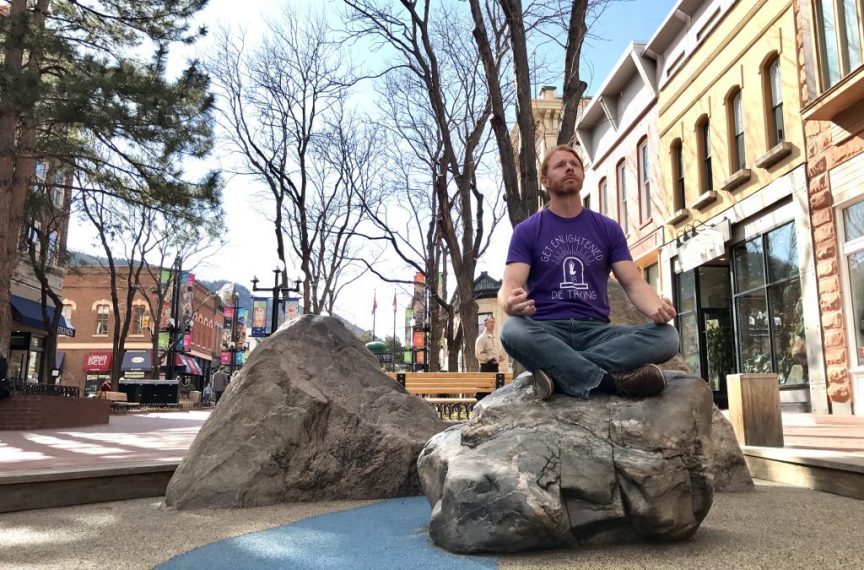 This is not just an act. Maybe that’s the biggest joke of all.

JP Sears is an internet sensation, famous for his 40-plus viral videos poking fun at his “ultra spiritual life,” meditation in public places, Instagram yoga posing, how to become gluten intolerant and, of course, why Boulder is “The Consciousness Capital” of the world. That makes it official; Sears has more than 2.2 million Facebook fans and more across YouTube, Twitter and Instagram.

He’s not from Boulder, but his satire hit the stereotypes head on. It’s obvious he’s spent a lot of time here.

That’s the thing about Sears. He says he only makes comical videos about things that he holds close to his own heart. Otherwise, he says, it’d be condescending and not serve a deeper purpose.

That’s the other thing about Sears. He’s joking, but he’s not kidding. Sears is a real-life emotional healing coach, a certified holistic coach and author of the book, “How to Be Ultra Spiritual: 12 1/2 Steps to Spiritual Superiority.” In 2017, he kicked off his book tour to a sold-out auditorium in Boulder.

Like his videos, his book (published by Sounds True in Boulder) uses satire to hopefully spark reflection and self-awareness, he says.

We wanted to know more about this super-ultra-spiritual guru, so we hung out with Sears at the Hotel Boulderado and then meditated with him on the Pearl Street Mall (meditation is more transcendent when people can see you doing it, of course). Here’s how it went down.

Surprisingly, you’re not a Boulderite. What are your Boulder ties?

This is my fifth time here. I very much enjoy it and love sinking into the community here. I’ve never lived here, aside from the fact that I’m living and I’m here right now. So there’s that small detail.

Has Boulder influenced you in any way?

I’ve learned how to better drive a Subaru Outback while wearing a vest while hauling my bicycle on the back with my dog in the back seat while going to get an intentional herbal beverage from Shine.

Aside from those important nuances, what I would dare say I’ve picked up from Boulder that I can consciously recognize — the biggest gift I’ve received is an intangible gift, the most valuable kind of gift: a feeling of genuine connection.

If Boulder is the most conscious place in the world, as you state in your video, why would people here need to read your book?

The thing Boulder has working against it is it’s trapped in this physical vibration. The ultra consciousness that I teach is not something that’s in the physical realm. It’s too high of a vibration. It’s not even on the astral plane. It’s such a thin, atmospheric, high-vibrational energy that it doesn’t even exist, yet it’s everywhere at the same time.

What advice would you have for Boulderites on how to be more ultra spiritual?

Meditating in public is something that people in Boulder need to do a lot more of.

Speaking in much more of a hush-toned Buddhist voice that’s completely contrived is something Boulder does well, but I think there’s room for improvement.

And the whole legalization of weed thing — I say legalize ayahuasca. When I was a kid, we had lemonade stands on the corner. I’d like to see Boulder with ayahuasca stands on every corner, with the vomit buckets next to it.

For visitors, what would be the most spiritually transcendent way to explore Boulder?

Astral projection is by far the best way to get out on the town.

When I do hikes via astral projection, I don’t feel affected by the high altitude. I spend a lot of time locked in my hotel room, curtains drawn, astral projecting.

Which do you prefer: beets or dandelion root?

That’s a good question. I’m going to have to go with beets because they create better conversation with your friends about your purple poop. And conversation with friends is what builds more community, and that’s what Boulder is based on: community that’s built from conversations about poop that is a result of beets that people have eaten that are now poop, which is somehow community.

Is matcha that disgusting green powder tea I’ve only had once for a reason?

How many times a day do you meditate?

I don’t stop meditating. Right now I’m doing an interview meditation. Before this, I was doing an out-to-lunch-with-friends meditation. I find just turning everything I do into a meditation helps me get away from my doingness and into my beingness.

Which is more spiritual: cycling or ultra-running?
I think cycling. Ultra-runners, they just look too tired. I don’t respect anything that uses the word ultra in it. It’s just trying too hard. There’s one exception but I can’t remember what that exception is.

What are some misconceptions people have about you?

That I am just about comedy, and that’s fine. I totally get it; you’re watching comedy videos. Why would you not think that? But the comedic part of myself is just that: It’s a part of myself. It’s not all of who I am. Sincerity is another part of me.

How did you get to where you are today?

I’ve spent the past 15 years doing emotional healing coaching with people, doing a lot of teaching around the world, workshops, classes, retreats.

For the first 13 or so years of my career, if I can use such a grown-up term, I didn’t really let the comedic part of my personality out, like that would be bad for business. Then about two and a half years ago, I started finally giving myself permission to make comedy videos, sharing my perspective through the language of humor.

I found out I was dead wrong. It was good for business. I also found out I shouldn’t believe everything I think, because I was wrong.

I also found out that my comedy is something that helps me connect to a lot of people. I’ve discovered that people are much more willing to consider a message that’s spoken in the language of comedy. It gets in for consideration. That’s beautiful. Whereas often times, when we’ve spoken a message in a serious manner, our psychological defenses go up and we won’t let the message penetrate to consider it. Humor allows people to be in an undefended state.

What’s the value of humor?

Humor has a potential to be a healing alchemist and it certainly has the potential to harm. I aim for awareness-based, not shame-based humor.

A funny thing happens when we’re able to laugh at ourselves: We become more distanced from that which we identify with when we stop taking ourselves so seriously. I identify less with what I take so seriously: my beliefs and practices and my groups — whatever I’m identifying with becomes less if we can laugh at it. It’s liberating. It allows us to have a more open mind, rather than just closing our mind for the sake of retaining our dogmatic beliefs. … At least, that’s my delusional point of view.

What do you hope viewers get out of your videos?

The first would be self-awareness … so they can get a little sense of who they are. What we’re not is our dogmatic beliefs and our attachments to different practices and philosophies. Separate the beliefs and behavior from the human.

I also hope people get a little bit of a dose of humility. To me, part of the human condition is we have a freaking ego and it will gratify itself in an egotistical way no matter where we go, whether we are aware of it or blind to it. … What we’re not aware of controls us more than what we are aware of.

I hope people notice their shadow side behaviors and accept them. It’s OK. It’s part of the human condition. When we have those behaviors but we’re not open, transparent and vulnerable with them, they get misdirected. Self-sabotage, relationship sabotage and self-righteousness comes in. 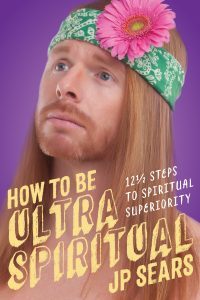 How does your book tie into the message in your videos?

It’s intended to give people laughs and entertain them, but the comedy is meant to deliver deeper messages. The message of my heart and soul is poured into the comedic language of the book.

I’m inviting people to be much more unapologetically true to themselves, not the expectations of who they’re supposed to be.

A lot of times, we look for happiness where it’s not: what we do or what we have. That can be a spiritual status, professional status or material possessions. Where happiness really is found is in what we are.

Do you have any other upcoming events or projects people can look for?

I’m putting out new videos pretty much every week on Facebook and YouTube. Aside from that, I’ll just keep all that a mystery for now.

To me, the book is the child that’s just been birthed. The afterbirth is still fresh. There’s a lot of nutritional value in the afterbirth of books. Metaphorically speaking, obviously.