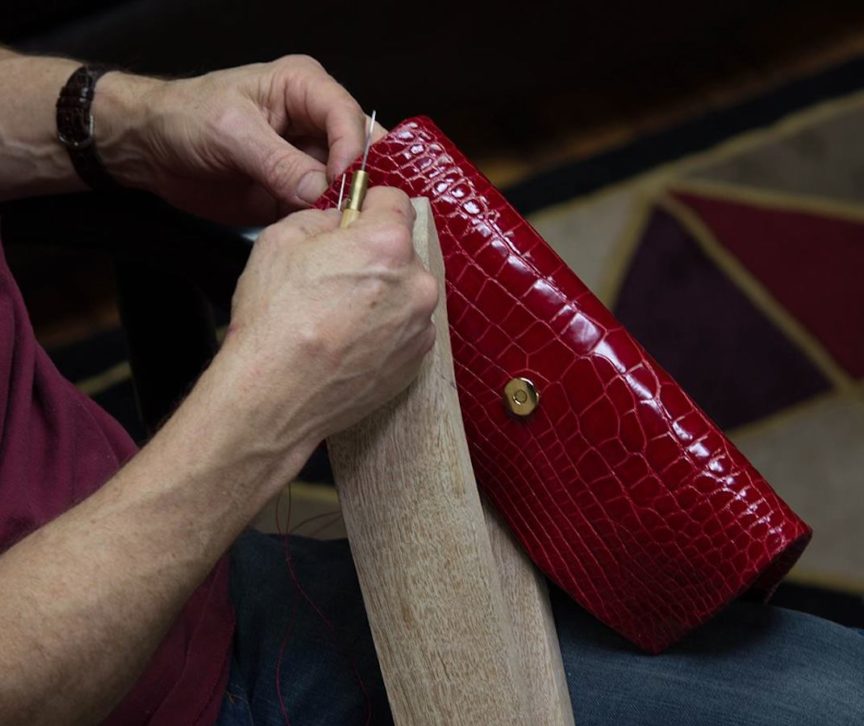 When people walk past this Pearl Street shop, they stop and stare.

It’s not every day that you get to see a leather-maker hand-crafting his products right in the front window.

Shoemakers are rare nowadays, which is one reason John Allen Woodward puts his workshop right in the forefront, not tucked away behind the retail shop. It’s a way of valuing the process, not just the product. It’s where Woodward grows as a maker. It’s where the magic happens.

Woodward, of Boulder, is one of the top master shoemakers in the world. He’s been making high-end leather boots and accessories for 27 years. This fall, he opened his first local storefront at 1505 Pearl St. in Boulder.

He works with just two others. As a small team, sitting on a 22-foot-long bench, they make everything right there from scratch. You can watch — and hear and smell — them cutting and sewing the leather, tracing designs, hand-engraving metal buckles. The tools and leather hang on the walls, the same equipment that leather craftsmen have been using for hundreds of years.

They make belts, wallets and handbags (he claims to have the largest selection of alligator wallets in the world), but Woodward is most famous for his boots.

In fact, a pair of his red alligator boots appeared in the Netflix original series “The Get Down.” Hollywood costume designer Jeriana San Juan (of “Gossip Girl” and “Saturday Night Live”) commissioned the boots, worn by actor Shammies Moore in the show.

He also made a custom, alligator wallet for Fox’s show, “Empire.”

In the shop on display, you can see for yourself a $25,000 pair of boots inlaid with sapphires and diamonds. Even if that’s beyond your shoe budget, Woodward’s goal is to inspire shoppers to consider what is possible

“The sky is the limit,” he says. And he is working on pushing even that.

Opening a shop on the mall, where people can pop in at any time, forces you to level up your game and keep it sharp at all times, he says.

“Whatever you’re doing, it better be top-notch,” he says. “Nothing’s hidden. You can see it right there. You can see what we do and how long it takes. It’s theater, really.”

Woodward came to leather design by chance. He actually started out as a singer/songwriter, and it was in a club where he met a boot-maker. He became entranced with this nearly-lost art and set off on an apprenticeship.

Today, he’s one of the last artisans in the country who hand-makes shoes.

But there’s a resurgence of interest, he says. A “renaissance” of the maker world, he calls it. So many people who stop by the shop have inquired about apprenticeships or classes (literally, daily) that Woodward is considering offering a leather workshop later this year.

The draw: the art.

From a maker’s perspective, he says, it’s fulfilling to take on a challenging task (with expensive materials on the line, too) and work hard to complete it.

“There are certain designs you can’t do with machines, and they’re usually the best designs, and only a handful of manufacturers do them anymore,” Woodward says.

And as his skill improves, the challenges become more difficult. But when he’s done, he says, he feels like he has grown as an artist. And the community responds to that.

Ultimately, he says artists are problem-solvers; they must figure out how to take an idea from their mind and follow the steps to make it a reality. The desire to solve problems is in our DNA, which is why humans feel drawn to making art, he believes.

All humans are naturally artists, Woodward says. He encourages people to follow their artistic urges.

“I hear the word passion thrown around a lot, and I’m not really sure what it means. But I can tell you that it’s way overrated,” he says. “Hard work is way underrated. I’m talking about making a plan and working on your plan every day, whether you feel like you’re making progress or not. Because you are.”

Success as a maker is never linear, he says. In fact, Woodward says one key to making it as an artist is developing an appreciation for failure.

“You gotta love failure. You gotta make something, and you gotta fail and see where you went wrong and you gotta do it again. You gotta learn to like that feeling,” he says. “You didn’t fail. You just found out how not to do it. If you’re not failing regularly then you’re not challenging yourself enough.”

Woodward says he fails in some way almost every day. Because he’s constantly trying to find a better method and improve.

“Sometimes it’s really painful,” he says. (When you’re working in expensive alligator leather, it can be an expensive lesson.) “But after I cool down, I say, ‘What’s good about this?’”

Your first thought will be “Not a damn thing,” he says with a laugh. But force yourself to keep pondering the question.

Sometimes, you will uncover a hidden skill that will work for something else completely different. If nothing else, you are one step closer to finding out what will work, he says.

“The problem is if you say the opposite: ‘Why am I so stupid? I’ll never learn this.’ Those things turn off your brain,” Woodward says.

When you focus on the lesson, you shift the focus into problem-solving mode. And remember, humans love to solve problems, he says.

When you try something new and ambitious, yes, you risk failing.