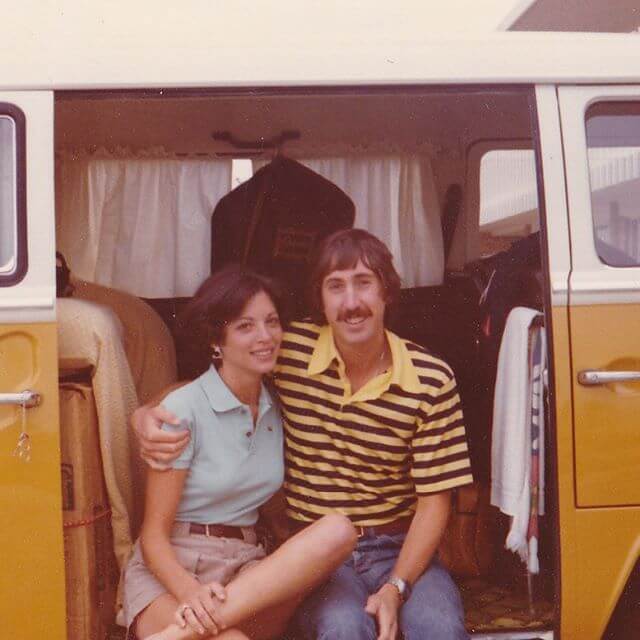 If John Atencio were a writer, he might pen the “Redictionary,” a book offering alternate definitions of words that, for whatever reason, society has distorted or muddled over time.

Of course, Atencio knows the meanings of these words. But he also knows they have the potential for deeper meaning.

Instead, he’s rewriting reality with his art. And with his actions.

Atencio uses these words, but he uses them differently than most people: to describe depth. Originality. Aspiration. An extreme level of care. And the important opportunity that humans have to be creators, to make something out of nothing.

“You can have heart and luxury. Adding art into those things changes them,” says Atencio. “Living the artful life is rich.”

When you walk past the sleek, high-end John Atencio jewelry store on West Pearl or drive past one of its mammoth billboards, it’s easy to shrug it off as just another fancy jewelry chain. After all, John Atencio’s jewelry is everywhere, in seven different boutiques across the state, from Cherry Creek to Park Meadows to Fort Collins.

But while we’re redefining things, it’s time to paint over that preconceived notion, too.

John Atencio is not who you think he is.

A part of him will always be the kid who used to idolize his uncle, an animator and “Imagineer” for Disney who wrote the script of “Pirates of the Caribbean” and used to give him little sketches of Mickey Mouse to hang on his bedroom wall.

Another part of Atencio is the college student at Colorado State University who was nearly kicked out of the art school studio for sneaking in after hours to make jewelry.

He’s the romantic who decided to make his girlfriend a ring to win her over. (It worked. And it launched his jewelry company.) He’s the self-taught, art-school-dropout rebel selling rings out of his VW Bus on The Hill in the ‘70s. He is a painter. A father. A savvy businessman with a business degree.

He’s a bit of all of these things and yet none of them exactly, painting his own, ever-evolving definition of himself that doesn’t exactly fit into any existing box. And you can feel that in his jewelry. Some pieces are risky, some are classic, but he considers all a living piece of art; when he sits down to draw, the design typically morphs and changes, almost like its growing on its own. Then, once he holds it in his hands, he says he spends time alone with it. Sometimes he lets friends or colleagues wear it for a while, so he can feel it out, test the size, depth, energy. Often, he then scraps it and starts over.

It has to be just right. It has to be “true.” That’s how he describes every piece that makes it through his tight filters and into the jewelry cases.

Yes, Atencio had designed every piece you see. Hundreds of them — he’s never counted so who knows? — over the 42 years that he’s been a jewelry designer.

“It would seem a little outrageous that one person would do all that design, but I do,” he says.

For a maker like Atencio, art is a necessity and even an addiction, he says.

“Nobody says to me I have to go paint or I have to make a certain piece of jewelry this week,” he says. “I’m feeding myself. I dictate to myself in order to grow and get better. I don’t think I will ever stop.”

How to stay motivated and keep growing after four decades is a question that seems to bounce right off Atencio like it doesn’t make sense. Art is in his blood, he says. 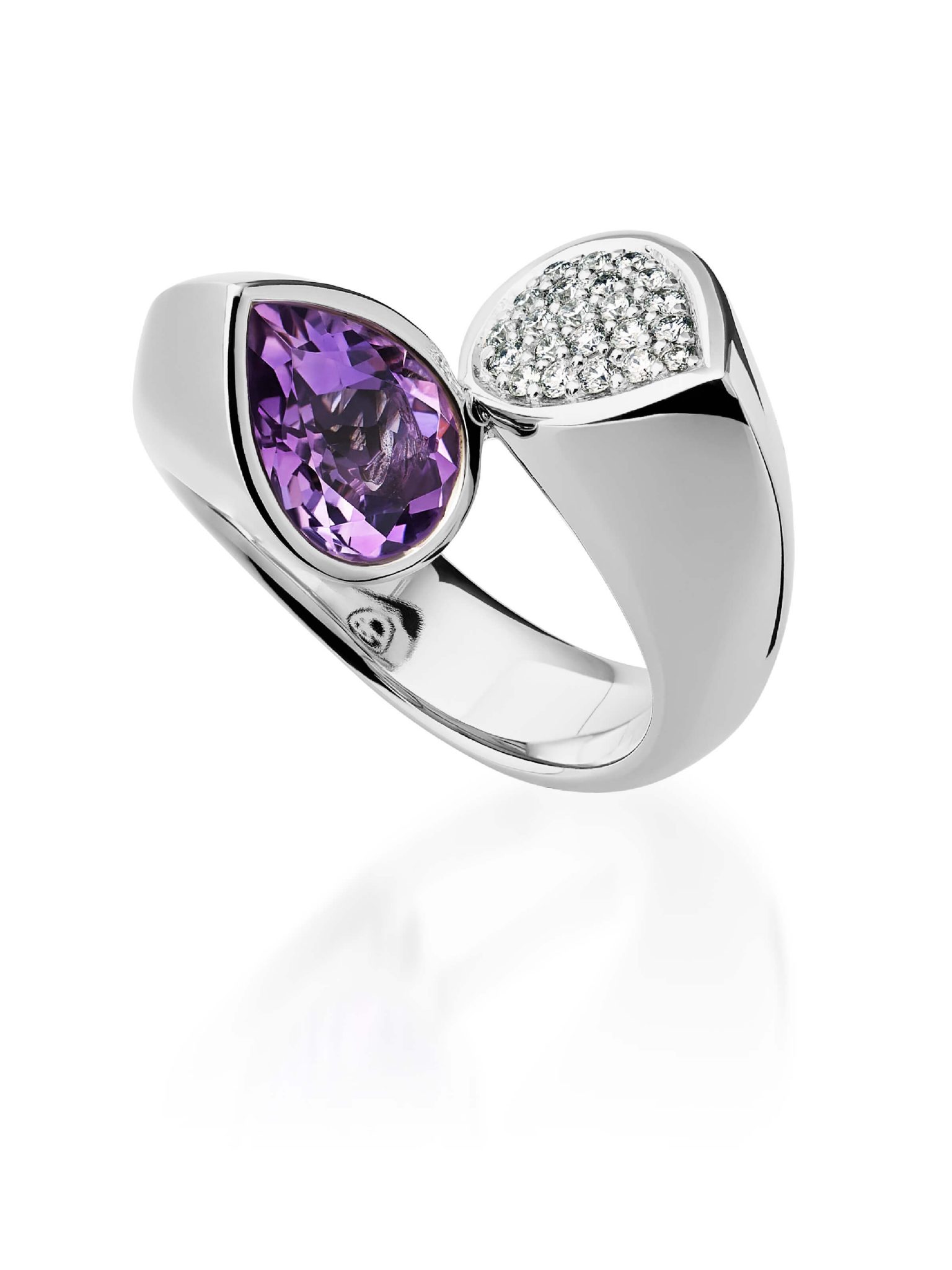 “I see these people who are struggling physically so much, but there are a few who have some kind of appetite for winning,” he says. “It’s the same in business. I don’t think I ever lost that hunger.”

As he speaks, he’s completely redesigning his Park Meadows location, inspired by the Boulder store, which he crafted to look more like an art gallery than a traditional jewelry store. It’s lined with his bright, original paintings and features movable showcases for special events and to easily transform the showroom. Yet one more concept to add to John Atencio’s hypothetical “Redictionary” jewelry store.

Boulder’s store was named one of America’s Coolest Stores by Instore Magazine, making it one of the best places to shop in Boulder. So Park Meadows has to be better, Atencio says. Of course. If you’re not constantly trying to improve, you don’t belong in the game, he says. 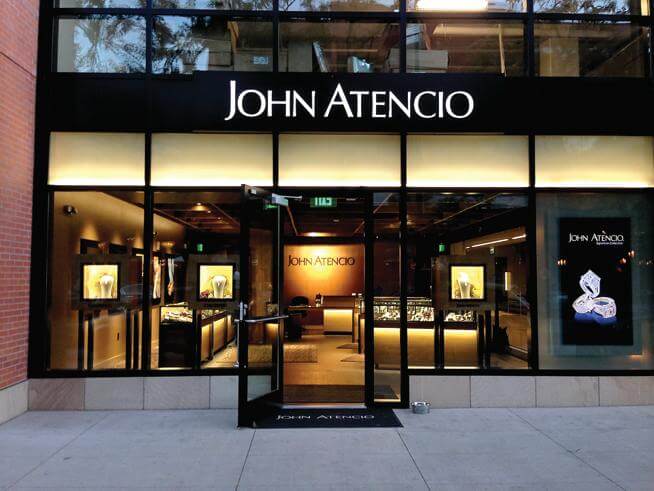 That brings him back to the Tour de France.

“People in the Tour are all trying to win. But a few just have a greater appetite for it; they can take the pain. There is pain in success, in trying to reach another level,” he says.

As a self-taught jewelry designer, he says even today — even after widespread success and acclaim and awards — he sometimes stumbles on self-doubt.

“There are so many talented people out there that sometimes your legs get a little wobbly. You stick your neck out and have trepidation about failure. You have demons knocking on your door: money demons, risk demons,” Atencio says. “But you fight those demons. I find joy in that. I like taking that risk.”