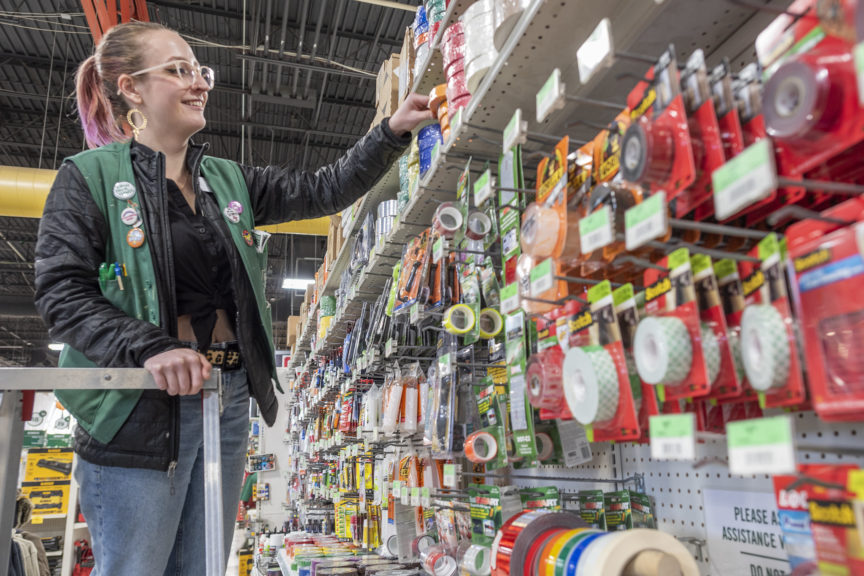 Editor’s note: We are saddened to learn of the passing of Dave Hight, the longtime owner of Boulder’s McGuckin Hardware. We were fortunate enough to chat with Dave and learn all about McGuckin’s storied history for this magazine profile by Aimee Heckel.

If you’re not from around here, it might seem strange that a hardware store is considered a local hangout in 2020 and one of Boulder’s top attractions.

But spend a few minutes wandering through the aisles of McGuckin Hardware, and you’ll get it. A few steps in, someone will greet you. A few more steps, and they’re your new buddy. Soon, you’re family.

It all started small and simple on a sunny September in 1955 with a fisherman named Bill McGuckin, four workers and four departments. Over the years, McGuckin Hardware has grown — now employing around 250 people in 18 departments across 60,000 square feet — and it has remained strong, despite doing just about everything the opposite of how a typical business runs. In that, it embodies the Boulder spirit. Perhaps that’s why the aisles are still bustling, despite the ease of Amazon and discounts at Walmart.

Randy “Doc” Dilkes, of Nederland, has been working here for 42 years. He’s not a Phd (unless you count his “Professional Hardware Degree”). His nickname is short for “Doctor of Darts,” his department of expertise.

“Everyone who comes in the door is our neighbor. This is our town. We love the people who shop here,” he says. And the staff is even closer, he says. “Our extended family is thousands of people, and we all consider them to be family.”

A handful of the older workers used to have their own ski team and take regular trips to Salt Lake City. Some try to retire, but return because they miss it. They have annual reunions.

“We still get along,” Doc says.

“We do?” That’s Barry Hight. He’s got a smirk on his face, like a teasing brother.

The first time they met, Doc tried to bust him for shoplifting. Barry was behind the counter in sporting goods, going through the knife cases, trying to fit a Swiss Army Knife in a case. That’s when Doc learned Barry’s dad owned the store.

Barry literally grew up inside these walls. His grandpa was the McGuckin who founded the store. His dad is the CEO; at age 90, he still comes in every day. Barry’s kid worked here. So does his wife. Oh yeah, he met her here when she was a cashier. His buddy Vinny met his wife here, too.

Typical stories, on a typical day in this atypical store that carries everything. If you can’t find it amid the 200,000 items, someone will order it for you.

As marketing coordinator Nicolette Power puts it, “If we don’t have it, you don’t need it.” 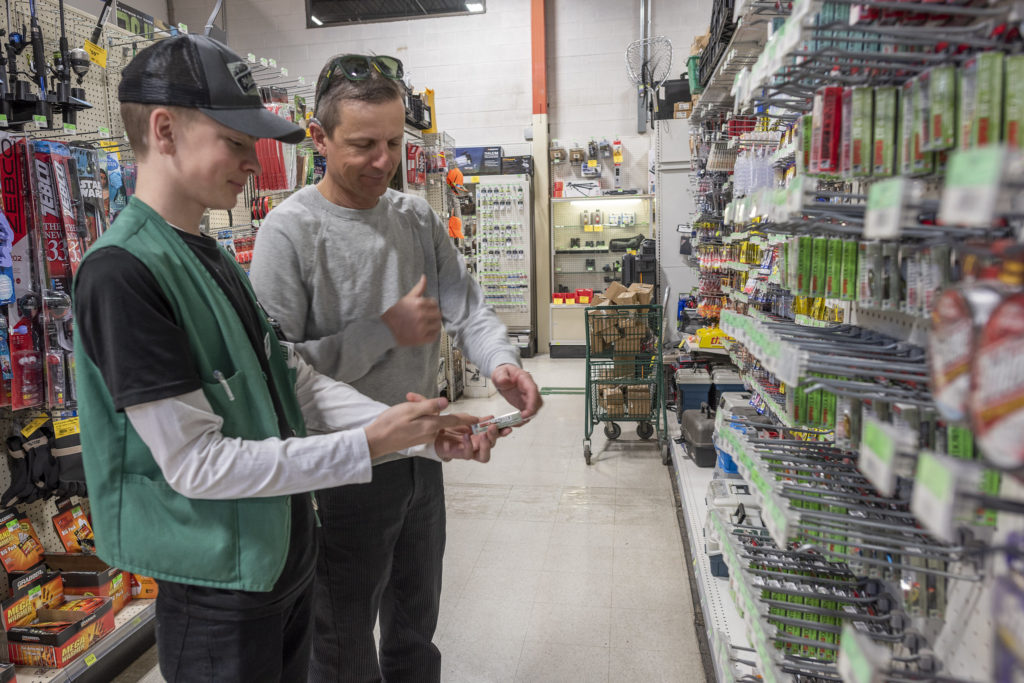 Even ninja throwing stars. Live ladybugs. Venus fly traps. Everything from humidifiers to plants to lava lamps. Essential oils, kitchen gadgets, toys, clothes and, of course, nuts and bolts and all the hardware.

In fact, that’s how McGuckin built its inventory: via requests. Due to that, it carries lines you can’t find at chain stores, like Stihl power tools, as well as locally made products. McGuckin is huge, but it still supports the little guys.

“If you were to take this business to an economics professor, they would shake their head and say, ‘This will never work,’” Barry says. “‘It’s too big. There are too many items and too many employees.’”

But those were the tenets the store was built on: personalized service, selection and first-hand experience. 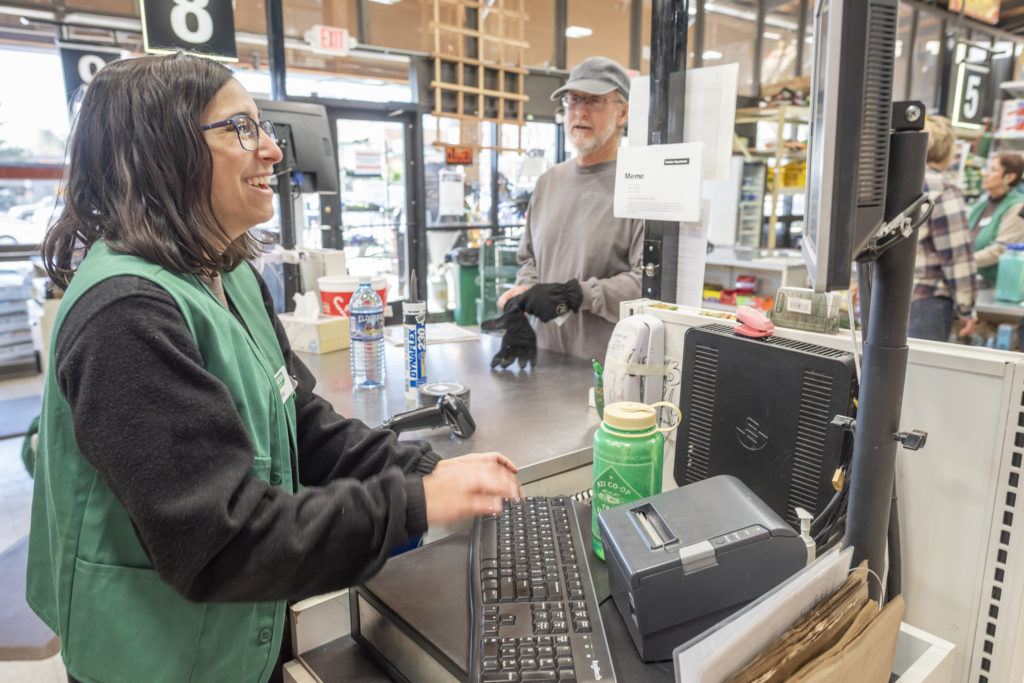 While the location and size have changed over the past 65 years, a lot hasn’t.

When investors offered to franchise the store and open branches across the country, CEO Dave Hight says he turned it down.

“I said, ‘You bring me 50 families who want to have a store, and I’ll teach them everything I know and give them all my suppliers,” he says. “I don’t want to control this industry. Let other people put their name on the store.”

Dave and his wife, Dee Hight, sit across from each other at the kitchen table in their Boulder home, built by her younger brother. She’s knitting a colorful blanket. Their friendly white dog, Jessie Lou, bounces at their ankles, hoping to get attention.

They’ve been together so long that they can finish each other’s sentences. She was 14 and he was 16 when they met in a dance class. They got married four years later. That was 69 years ago.

Dee says her dad decided to open a sporting goods store because he no longer wanted to be a seven-day-a-week, on-call pharmacist, running a drug store during the war. The McGuckin family was renting a house in Fort Lupton for $25 a month when they decided to move to Boulder. Dee and Dave were newly married and running a general store in Climax.

A few years later in 1960, Bill McGuckin asked Dave to become a partner in the store. 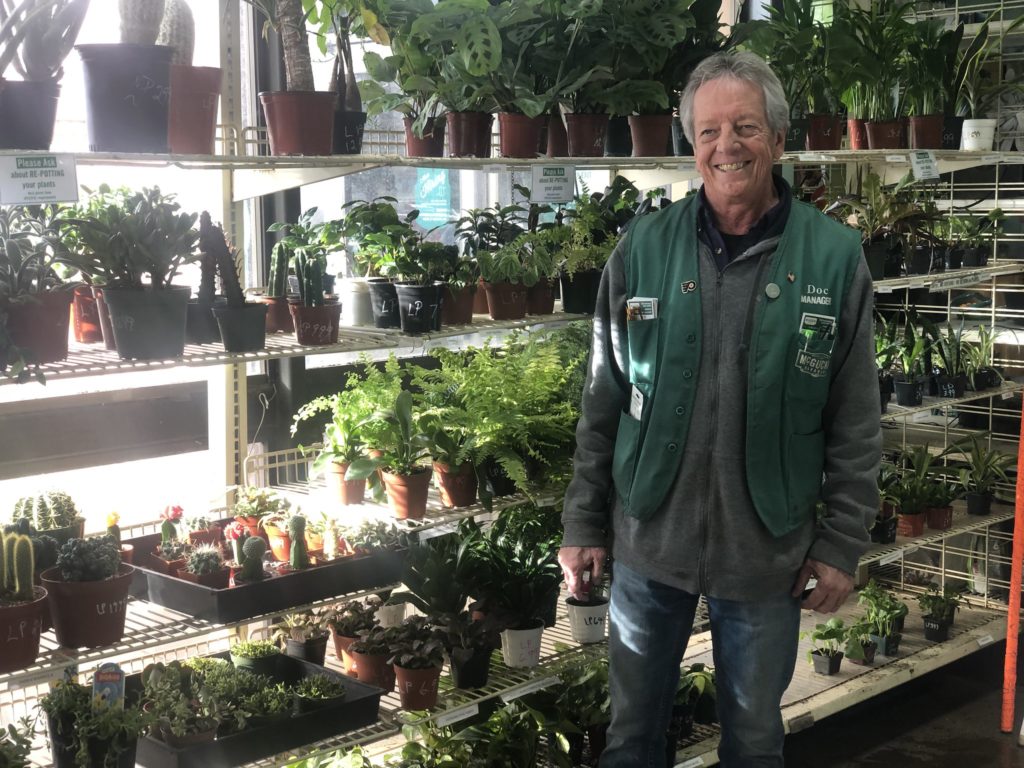 “He was sick of business,” Dee says.

So they moved their family of three boys into a trailer on 28th Street. Just six years later, her dad died. Dave was left to lead the family business, and the founder never got to see what became of his dream.

“My dad would be shocked at all this,” Dee says. “He would be so proud.”

Although Dave never wanted to franchise McGuckin Hardware, he did open his own second branch in East Boulder near Frasier Meadows, but it never made money. He says it was more of a “community service” to make products available to that side of town. They shut it down in 1985 and moved the inventory to the main branch — trip by trip, packed into a convertible.

The central Boulder store itself also moved several times as it outgrew its space, but it’s remained on the same block in the Village Shopping Center. Barry says one of his earliest memories was in 1978 moving to the current location, a former brick factory with a “red-light motel” with a drive-through liquor store across the dirt parking lot. Back then, this was the edge of Boulder.

“It was so much fun, though,” he says. “We had a little diesel-powered train with carts on the back. We’d load them and drive it across the parking lot back and forth.”

Boulder was growing, he says.

“It was time for us to grow, too. It was time to do something else,” he says. “We grew with Boulder, size-wise and product-wise.”

As a family-run business, partnering with family-run wholesalers was a priority for Dave. But the rising price of goods put many wholesalers out of business, he says. He lost 50 wholesalers that he considered good friends, he says, but he still maintains relationships with the ones that remain. He thinks one of the biggest changes in business is more people today buy for price, not principle.

That’s not how he works.

“I’m a loyal person,” he says. He’s wearing a green McGuckin sweatshirt. “I buy from people who take care of us. We’ve helped a lot of companies and manufacturers get started over the years.”

He pauses, thinking back.

“The years go by so fast. Enjoy them,” he says.

Dave thinks back on the store. “We don’t own it,” he says. “It’s just a part of the community.” 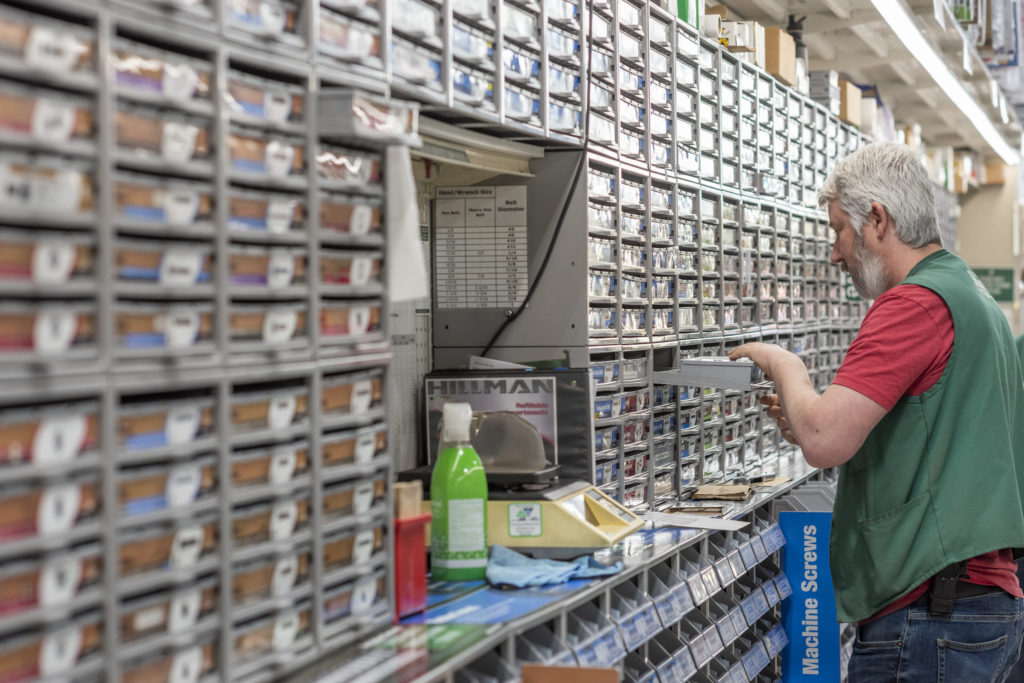 Richard Orr checks the inventory of thousands of bolts, screw and nuts at McGuckin. Photo by Mark Leffingwell

The green vests, as the workers are called, are the heart of McGuckin Hardware.

The large staff is what allows for attentive customer service, which is what makes this business stand out, says Clay Bonnyman Evans, author of “Behind the Green Vest,” a book about McGuckin.

The book dives into the store’s history, starting with the 18th-century immigrants who ultimately worked their way into business ownership, alongside the city of Boulder’s own transformation over the years. Clay calls the McGuckin story a “living example of ethical business practices” through customer service, supporting the community and treating employees well — something you see all too rarely amid corporate and online companies.

“They’ve never tried to chince their employees,” Clay says. “They pay them a living wage, even in Boulder. Their philosophy was never that people are disposable. Treat them as best as you can, and it becomes a family. If you go down there and observe, you’ll meet these people who have been there forever.”

This isn’t just a story about a Boulder business, he says.

“These people are salt-of-the-earth. They grew up in rural Colorado and run this business that amazingly has fended off every single challenge it faced,” he says. “And they did it in this super old-fashioned way: ‘Yeah, we want to make money, but we want to pay our people well and treat them well so they stick with us for 50 years.’ That, to me, is an astonishing story.”

How’d they do it? First, he says McGuckin has smart buyers who find holes in the market and fill them (like if you want the coolest holiday decorations that you can’t find anywhere else, you go to McGuckin). Second, that customer service. The third factor, he says, is Boulder, itself.

“We have an educated community that understands the value of having businesses that are responsible to the community they serve,” Clay says. “Some of the stuff you get might be more expensive, but most people have the kind of income where they’ll pay a little extra to support a company supporting the community.”

All of this combined is what he calls the “McGuckin Way.” The “grandpa attitude,” Dilkes calls it in the book. Be friendly. Treat everyone the way you wanted to be treated, like your neighbor.

“A family-owned hardware store like McGuckin’s is one of the last, great places of Americana in business,” Dilkes says in the book. “We epitomize that.”

As you walk through the aisles of McGuckin, look for the 90-year-old in a green vest pushing a cart to help him walk. He visits every department every day, so he’s hard to miss. He hangs out a lot in 12B, an aisle with his name on it. That’s where they keep the brooms, mops, floor supplies and garbage cans. Although he’s the head honcho, Dave Hight says he tries to never criticize staff.

His wife calls him the “ambassador.”

“Everyone knows him. He knows everyone,” she says. “Ask him to tell you a joke.” She turns to him with a smile. “What was that joke you told me? The zipper one?”

He chuckles. “I can’t remember now,” he says shyly. But you can tell he does remember. He’s just saving it for another day in aisle 12B.