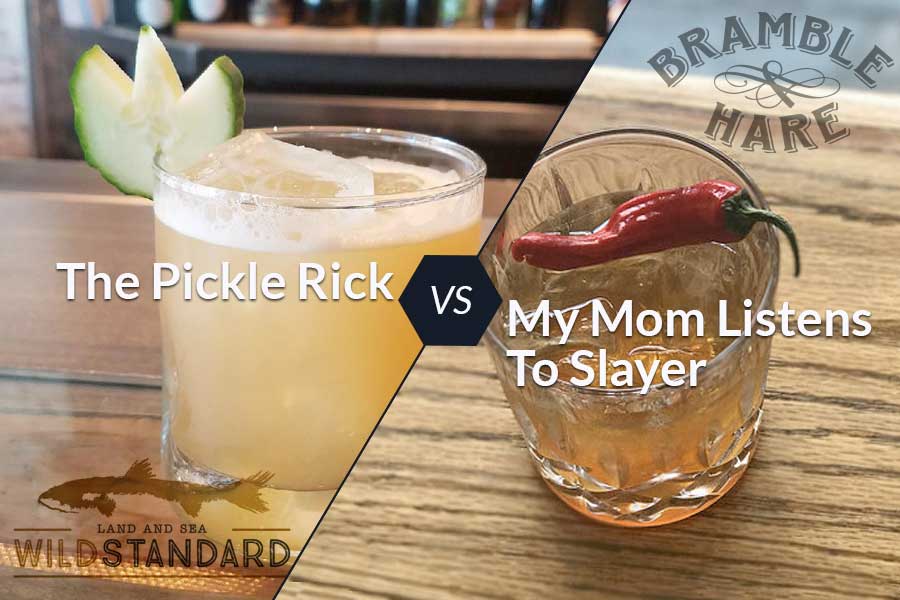 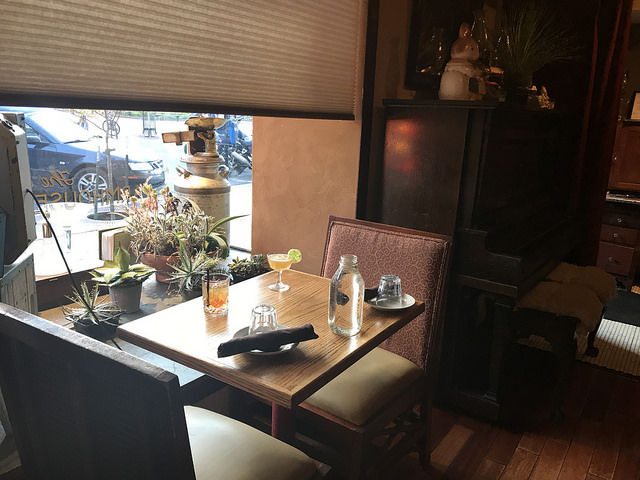 Cocktails at Bramble and Hare in Boulder. Photo by Aimee Heckel

It’s time to toast. But in Boulder, you can’t just raise a classic cocktail and call it good.

Oh, no. Boulder is known for its creativity and craziness, as well as its foodiness. Stir that together and you’ve got a wildly innovative cocktail scene.

Bar hop and you’ll run across concoctions you’ve never heard of before and can’t find anywhere else. Like the Pickle Rick at Wild Standard and the My Mom Listens to Slayer at Bramble & Hare.

Both are unique a.f. Both are also totally tasty. Their punny, pop cultural references are the cherry on top.

Wild Standard and Bramble & Hare are two distinctly different sides of Boulder, both worth experiencing when you’re in town. The downtown restaurants are also known for their fresh ingredients and fresh take on food and drinks. In fact, the ideal night out would include a stop at both.

But in case you’re on a one-drink-and-done limit: 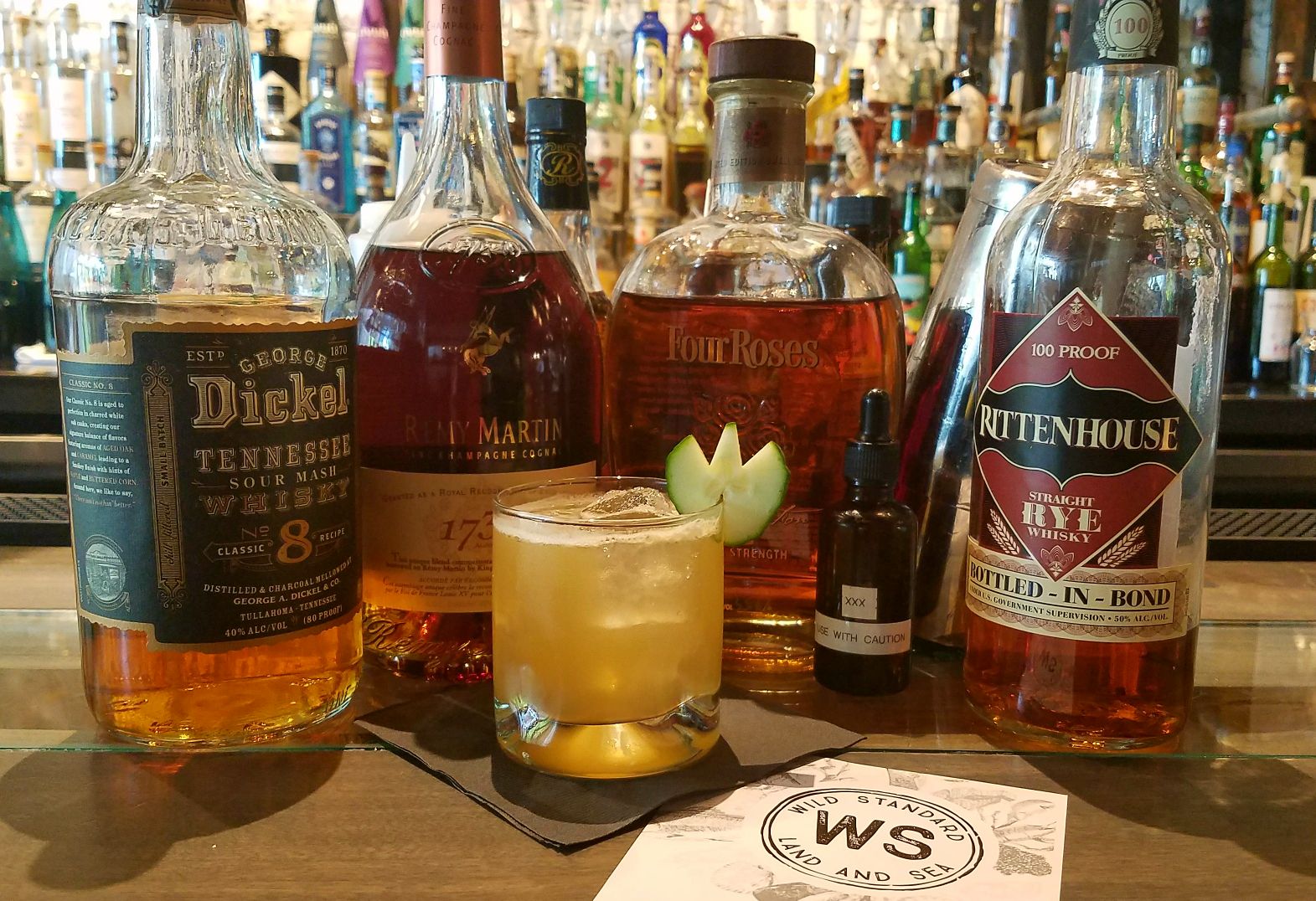 Here’s what goes into a Pickle Rick. Courtesy photo

What it is: Wild Standard has a long list of creative cocktails, as well as spirits you can’t find just anywhere, but the Pickle Rick is one of the most original and innovative creations.

Not to mention the name. It’s inspired by the “Rick and Morty” show. In one episode, Rick turns himself into a pickle in one of his experiments. Because this drink essentially takes a cucumber, muddles it and pickles it in alcohol, the name was fitting, says bar manager Joseph Buckley, who co-created the drink.

“Boulder’s a little weird, and we’re a little weird at the bar, as well,” he says. “People here just want something out of the ordinary that’s pushing some boundaries and is delicious. The way we cater our program is hopefully suiting the clientele of Boulder.”

The Pickle Rick is part of a seasonal drink menu that will change up over the next couple months, but Buckley says if you ask for it any time, the bar will make it for you.

It’s a must-order for “Rick and Morty” fans, he says.

The taste: It’s hard to find a whiskey cocktail that’s refreshing and summery, that can seamlessly transition into fall. The Pickle Rick is a balance of sweet, spicy, tart and refreshing.

“This particular whiskey drink comes across as lighter than many, without being too sweet. So many whiskey drinks are heavy. This one has a bright taste and is easy to drink,” says Gretchen TeBockhorst, spokesperson for Wild Standard.

“People often think to ask for a sweet or a bitter drink but are pleasantly surprised when they like something they wouldn’t normally order,” he says.

The Pickle Rick could be considered a kind of whiskey sour cocktail, because it blends three different whiskeys, plus a bit of cognac. This alcohol carries through the muddled cucumber and lemon juice, so it’s not too sweet.

Then add in the ghost pepper bitters, made from powdered, ground ghost peppers, infused with grain alcohol and strained. Each drink only has three drops, but the heat is very noticeable. If you’re feeling fiery, request up to six drops. The ghost pepper bitters carry a ton of heat but without any specific flavor, which is unique for a spicy cocktail.

It’ll get your sweat going. As the weather chills off, this drink can be warming, especially with the cognac.

Not to mention Colorado loves its whiskey, making this a quintessential Boulder drink: whiskey with a dash of weird. 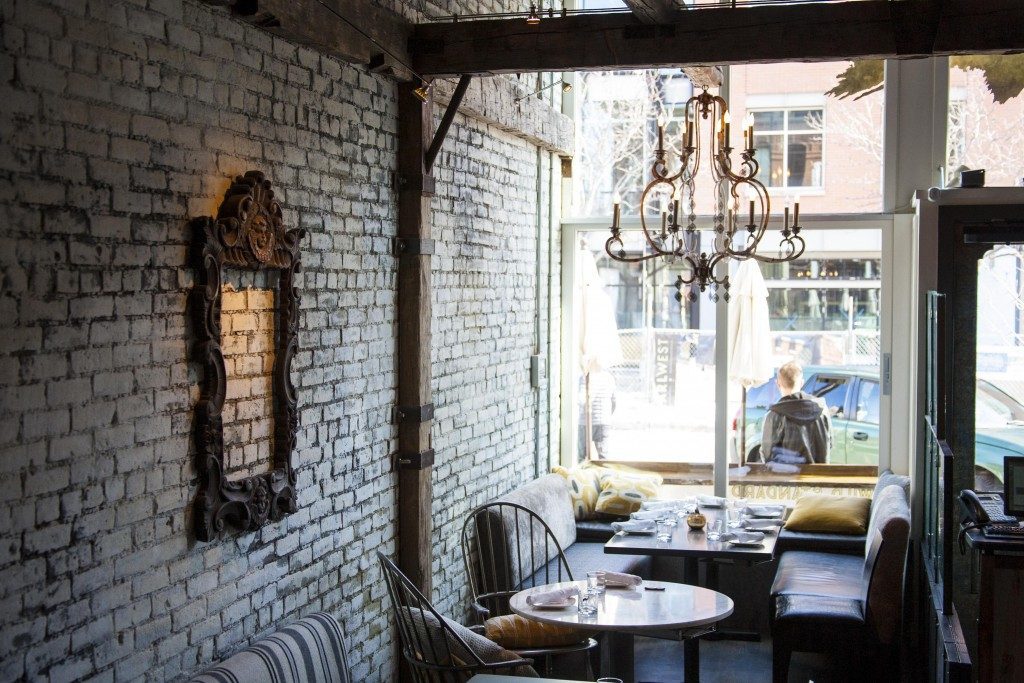 The scene: Wild Standard, located on west Pearl Street, is a rustic yet hip, large and spacious restaurant that serves up fresh seafood (yes, in landlocked Colorado). The restaurant is bright and open, with large, glamorous chandeliers juxtaposed next to exposed brick and industrial accents.

Although it’s sexy enough for a romantic night out, Wild Standard is far from stuffy. Its new cocktail menu (that includes the Pickle Rick) is playful and all about fun, Buckley says. Drink names are all funny spins on pop culture references, from “Arrested Development” to “The Doors,” from bad puns to memes. “While we take our drinks seriously, we do not do the same for ourselves” is the motto. You’ll find funky twists on classic drinks, too, in case a Pickle Rick is too, er, experimental for you.

“We like to be a little whimsical with our drinks,” Buckley says. ““We put a lot of time into our mixology but ultimately, the guest experience is the most important thing.” 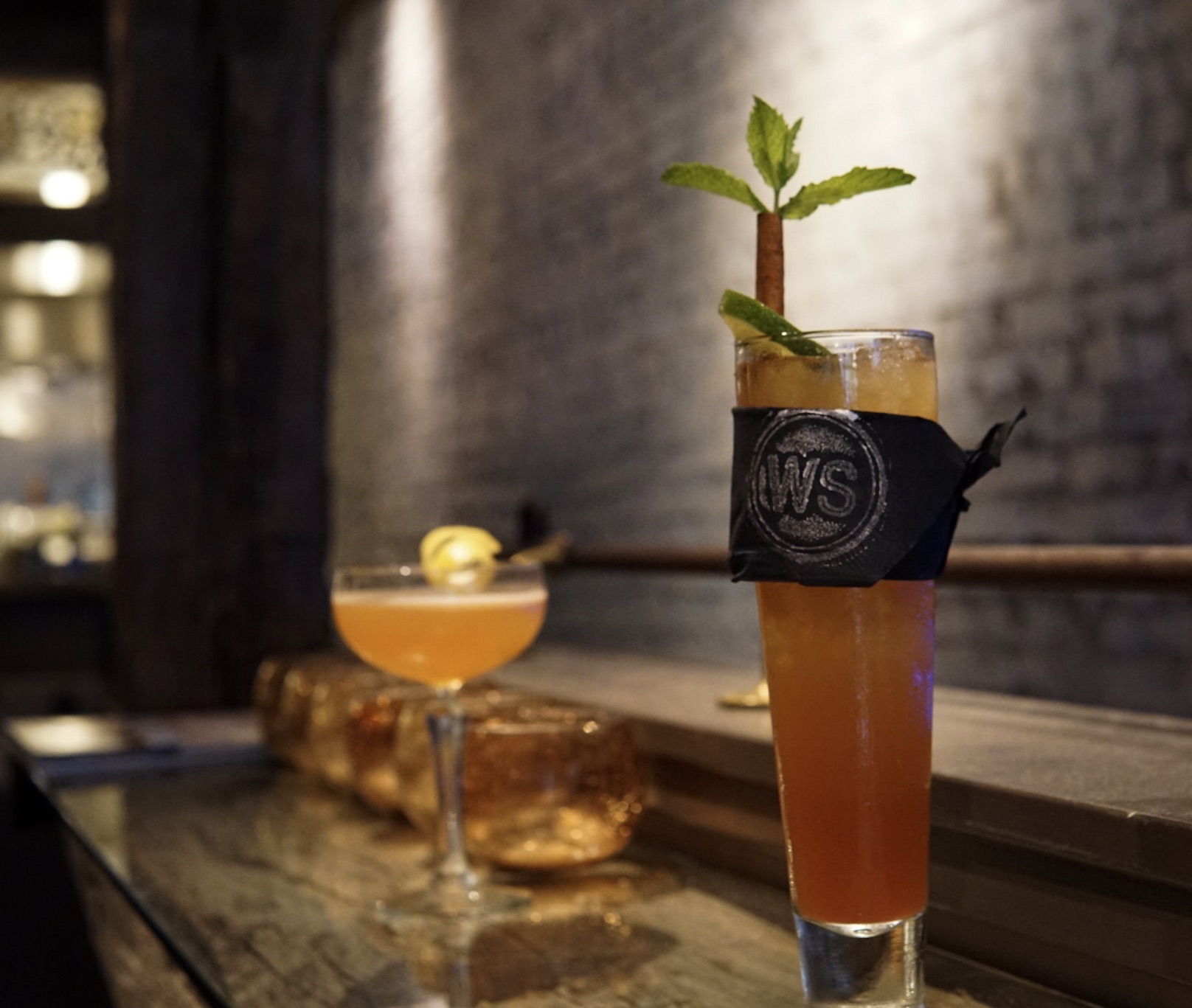 In the foreground, There’s Always Money In The Banana cocktail at Wild Standard. Courtesy photo

Or try this: Looking for another crazy cocktail? Try There’s Always Money in the Banana, a frosty tiki-style cocktail blending banana, coffee liqueur, cinnamon and topped with a tiny palm tree. 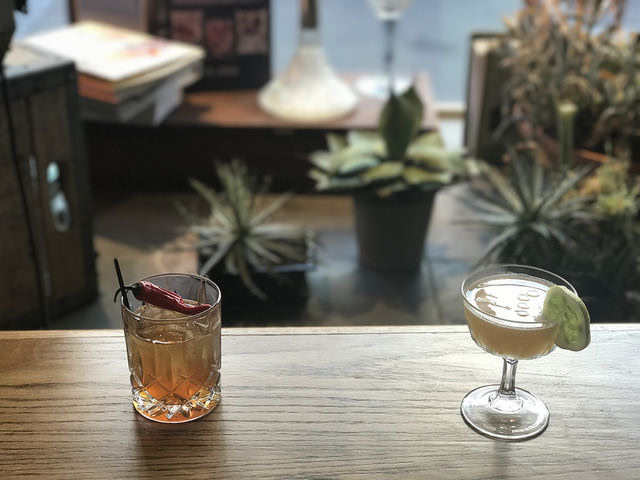 My Mom Listens to Slayer, on the left, at Bramble & Hare. Photo by Aimee Heckel

My Mom Listens To Slayer

What it is: Bramble & Hare is a tiny farmhouse kitchen tucked just off Pearl Street, the kind of place you might not know about unless you know about it. It has an old-fashioned, small-town feel to it, with simple, rustic food and drinks with ingredients harvested directly from its own nearby farm.

The food and cocktail menu is completely subject to what’s in season, which plays into the My Mom Listens to Slayer drink. This mixed drink is a staple on the menu — you’ll see the catchy name throughout the seasons as the menus evolve — but the specifics of the cocktail change as the harvest changes. One thing stays the same: it’s always a combo of beer and tequila, with other flavors.

The ingredients: Right now, the farm is rich with shishito peppers, so the current incarnation of My Mom Listens to Slayer fuses the flavorful peppers with Reposado tequila, cherry, basil and Flemish Sour Gastrique (that’s a beer).

Bartender Daniel Shuford says he expects this version of the drink to remain the same through the fall, due to the number of shishito peppers harvested. Expect to see the beers switch up, as well, to complement the different produce.

“The items change, but the template is the same,” Shuford says. “That’s representative of the restaurant. It always changes.”

One big goal (that is oh, so Boulder) of Bramble & Hare is to repurpose as much as possible, so many of the drinks here use leftover produce from the kitchen, which may become a garnish, flavor accent or reduced to a syrup.

“We use everything we can from the farm,” Shuford says.

The taste: Although you might not immediately feel like mixing tequila and beer is a good idea (like, for example, you or maybe we did this in college and may never have fully recovered), this drink does it masterfully. It’s refreshing, with a sneaky, flavorful, peppery bite. It’s almost like a fall, spicy margarita, with the tequila mixed with the sour. Except it’s different enough, with the basil and cherry notes, to be in a class of its own. The drink is warming and exciting. 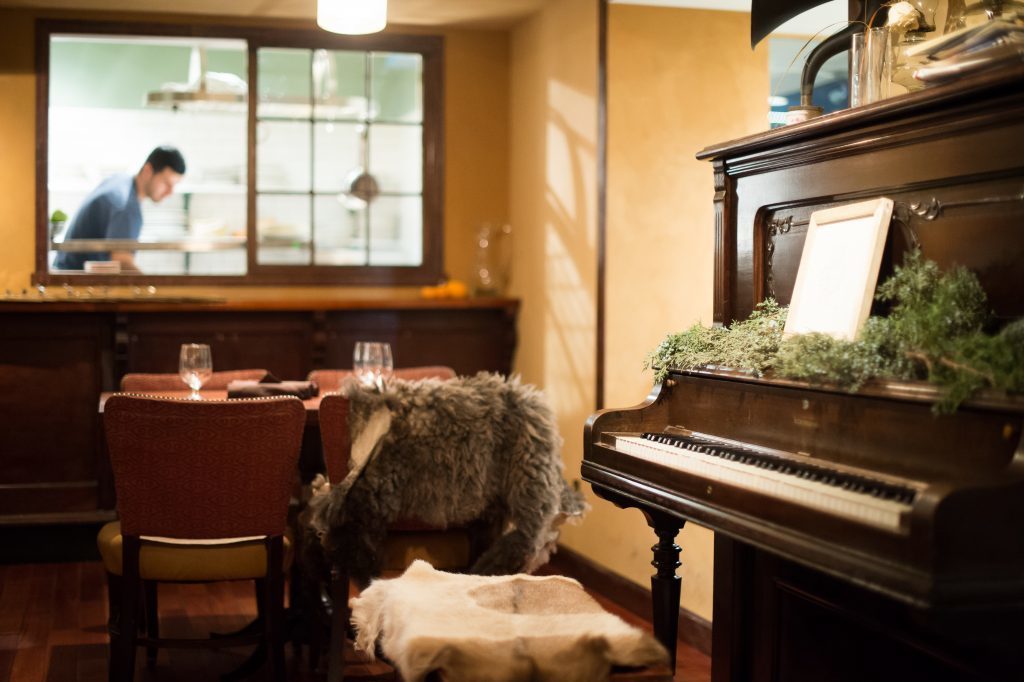 A glimpse inside Bramble and Hare. Photo by by Ashley Davis Tilly.

The scene: Bramble & Hare is incomparable to anywhere else in Boulder. From the outside, you could easily walk past the front door without a second glance. But after the dinner rush, this place gets totally packed and rowdy. Even during dinner, it can be hard to land a table here, in particular because there are so few tables (make a reservation). Tables are small and tucked closely together; this place is set up for an intimate, quirky, semi-casual dinner with five-star offerings on a limited menu.

The atmosphere is cozy, warm, dim, relaxed and rustic. The space is adorned with repurposed farm equipment. There’s a hip, agricultural vibe with a little Wild West feeling. Maybe it’s the piano crammed in by the front door. This feels like Boulder’s roots. It’s a must-see spot to experience authentic Colorado. 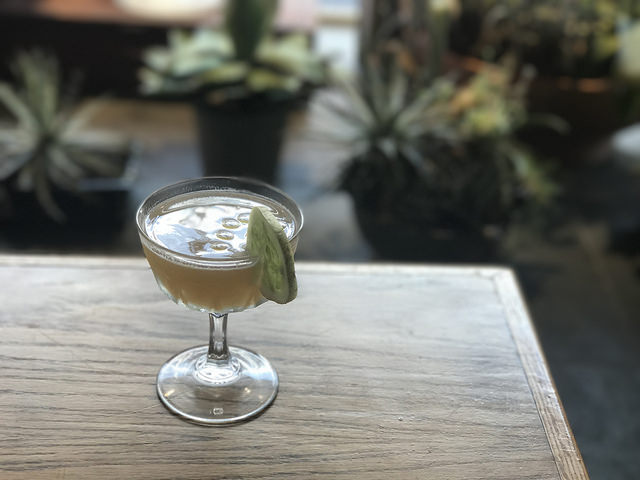 The Catch Her In The Rye cocktail at Bramble & Hare. Photo by Aimee Heckel

Or try this: Catch Her In The Rye, a new and fresh spin on a whiskey cocktail. This is a whiskey drink for people who love whiskey and want to try something different, as well as for people who think they don’t like whiskey. While rye is a prominent ingredient, it’s not a super whiskey-forward cocktail, as it blends rye with VinOro, a slightly oxidized white wine blend from Italy. (Yes, wine and whiskey in one cocktail.) Add to that honey, fresh lemon juice and in-season lemon cucumbers and you’ve got a light but powerful toast to Boulder.