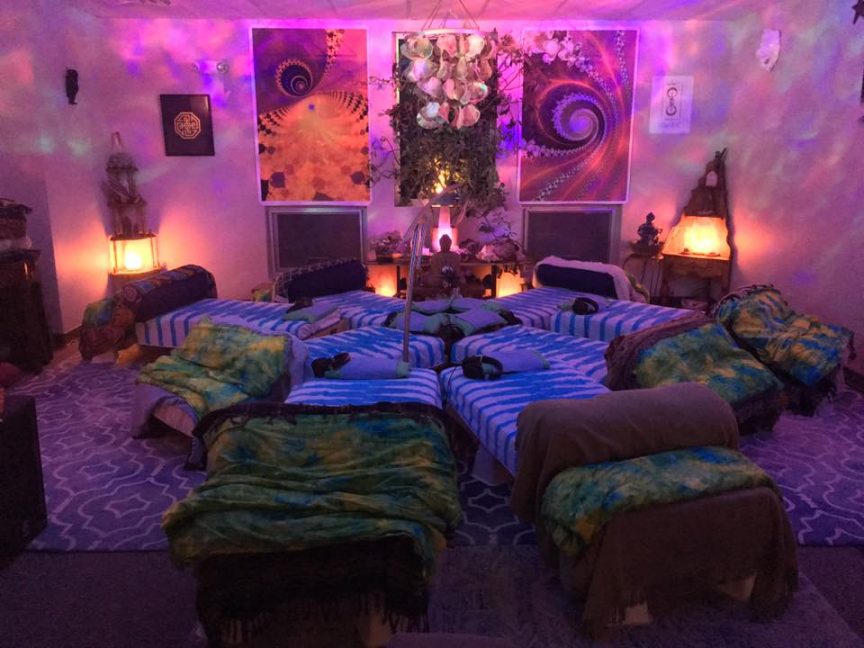 You’d better sit down for this one. No, actually, lie down.

That’s how a session at IReVibe starts. And where it goes from there is tough to explain. There’s one thing for certain, though: You’ve never gone here before.

Imagine a way you could explore untouched corners of your consciousness and self-awareness in a psychedelic experience, but with no drugs or substances. Almost like the deepest state of meditation, when you enter a trance-like state where your brain expands beyond its own knowing.

Or maybe it’s easier to imagine just a really amazing, strange nap. On a vibrating bed. Under a lamp of bright strobe lights.

It’s hard to explain what IReVibe offers because it doesn’t exist anywhere else. This is a truly only-in-Boulder experience. 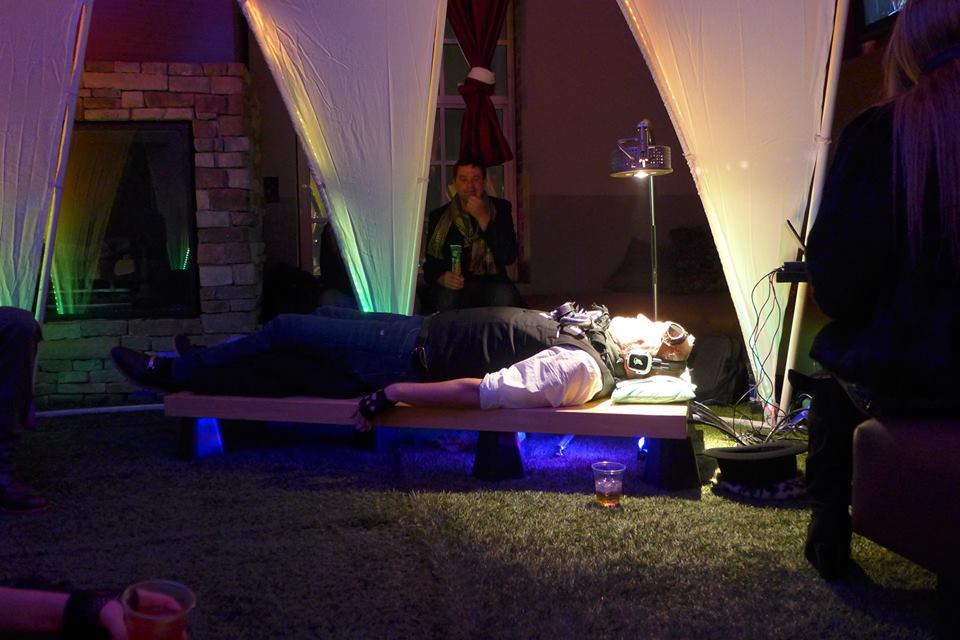 A man at IReVibe. Courtesy photo

It started years ago when Chuck Hyde, a personal trainer, massage therapist and bodyworker, discovered vibrating “yoga boards.” These are wooden boards that stream certain sound frequencies, chosen to relax the nervous system and body. You essentially feel the music and frequencies vibrating throughout your entire body. (Imagine lying on a loud speaker.)

The premise: Many studies show the benefits of relaxation, napping and meditating. Pair that with a NASA study that found that being on a vibrating plate can help prevent bone loss or help osteoporosis. The vibrating beds send waves through the body (which is made up mostly of water), and the vibrations affect that water, Hyde says. In that, whole-body vibration can cause your cells to move and shift, he says.

He was exploring the potential of healing, stress management and relaxation on these vibrating boards when he met local representatives with an unusual light called the Lucia No. 3.

Here’s where things get really wild.

The Lucia, known as a hypnagogic psychedelic meditation light, emits specific rays — one set of long, bright rays mimicking sunshine and another set of specially tuned strobe lights — that, when shined together at your face, gently stimulate the pineal gland in the brain.

So, you’re lying there with your eyes closed under these highly stimulating lights, and your brain is forced to adjust to this new reality. The novel stimulation forces the brain to adapt and grow, Hyde says. As you focus on relaxation and breathing, your brain essentially opens up. At least that’s how Hyde describes it.

“It’s like a high without the drugs,” he says.

He references a University of Sussex London study that measured the light’s impact on the nervous system. This study found it provided the same level of stimulation as a magic mushroom trip.

Other studies have found that a 40-hertz flickering light could possibly break up a certain type of plaque on the brain responsible for amnesia and dementia, and MIT News reported the light might be a new treatment for Alzheimer’s. A study published in the International Journal of Alzheimer’s Disease further examined this connection but noted more research is needed.

“And it’s non-invasive, and it’s kind of fun,” Hyde says.

Always curious about the workings of the nervous system, Hyde wondered: What would happen if he combined the Lucia lamp with his vibration boards.

Fifteen minutes later, he says he’d had one of the most profound experiences of his life, and he decided to dedicate his career to exploring it further and sharing it with others.

“For thousands of years, humans have been trying to alter consciousness culturally, ritually or dancing around the fire — with drumming that induces psychedelic trance states, dance rituals they do for hours or days,” Hyde says. “Native Americans have sun ceremonies where they dance for days, all to enter a trance state, a mediumship with the unseen world that’s all around us, but we seem to have been taught it doesn’t matter.” 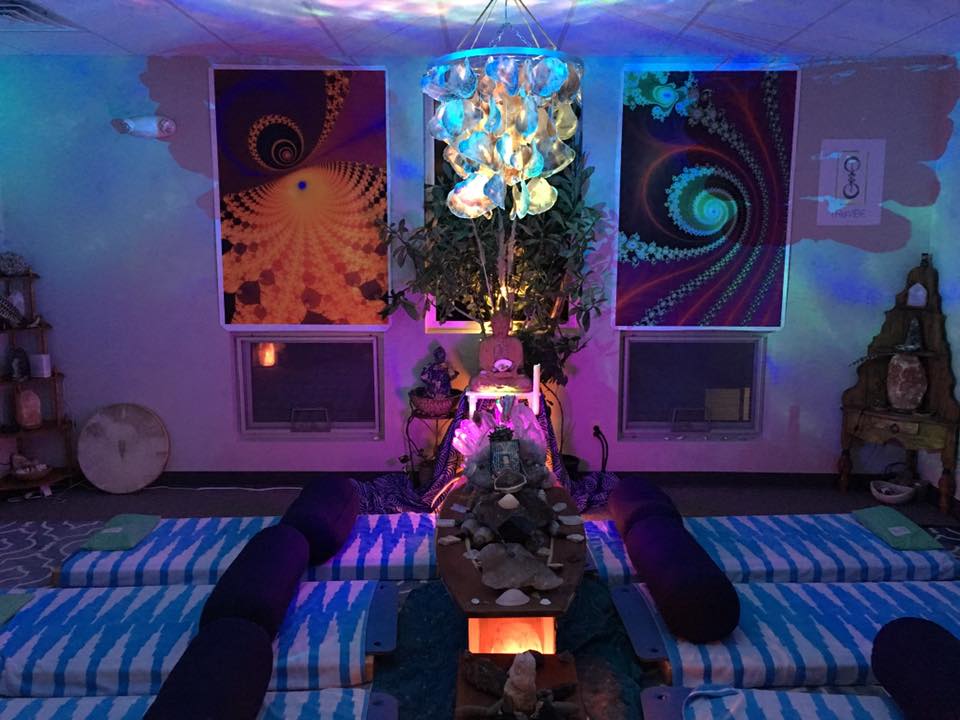 You can visit his studio to try it for yourself. (Although it’s not for people with a history of epilepsy.) You can pick from a variety of different sessions, whether solo or with a group of up to four. He recommends the one-hour Visionary Experiential for newbies. That includes 30 minutes of lamp stimulation followed by 30 minutes of relaxation on the vibrational board. During the process, you are guided to maintain a connection to your body and breath. You’re likely to skip in and out of sleep like a rock skipping across the water, Hype says.

Eventually, your brain learns how to “stabilize” and stay awake while in the dream state, aka you enter the lucid world.

“You have an experience that will probably be one of the most difficult things for you to describe, unless you’ve done magic mushrooms or acid,” he says. “It’s a fun opportunity to test yourself a little bit.” 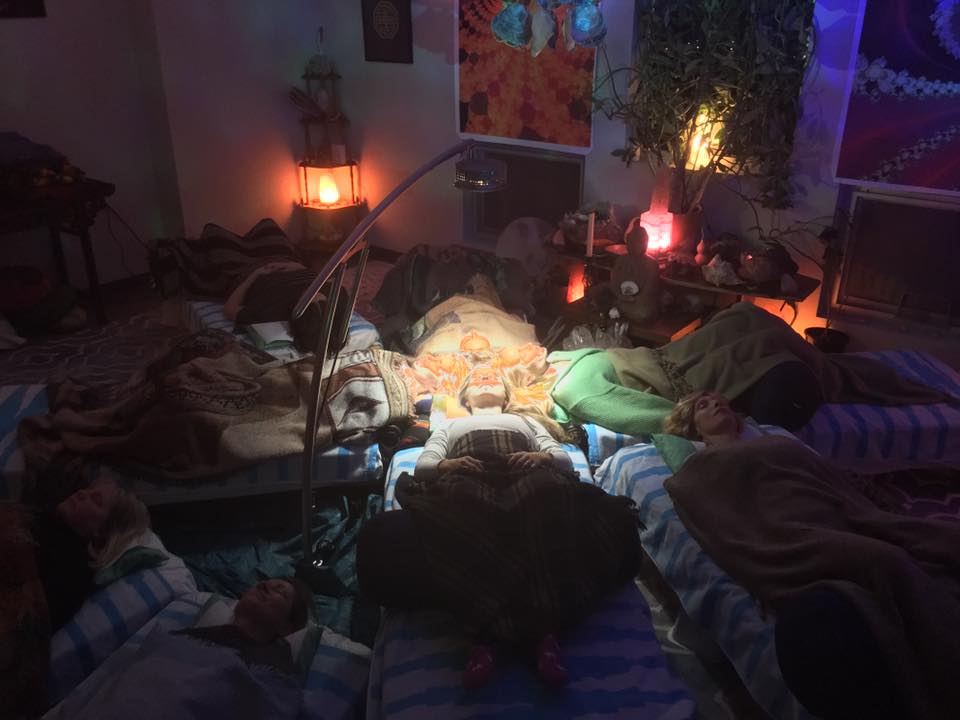 One motivation to try it is simply curiosity. But he says it runs much deeper.

There’s a growing bio-hacking (or consciousness-hacking) movement, as people study the brain in search of ways to uncover its greater potential.

“Underneath the lights and vibration, we’re attempting to give the human consciousness the coordinates for where the magic happens inside the body,” Hyde says.

This visual and tactile experience forces the brain to grow to explore new dynamics in a way that’s new, but also ancient, he says.

“Flickering light has been used for thousands of years. The flames of fires flickering would induce trance states with ancient people in caves doing rituals and ceremonies,” he says.

But unlike just another novel experience, which also does spark the formation of new neural pathways, the brain simply can’t figure this one out, he says.

“It’s not something you figure out with the brain, like a puzzle where you gain new skills. It’s more open-ended and progression-based; you learn how to hone the dynamics of awareness,” Hyde says.

But he stops. He says he doesn’t want to create too much expectation.

The experience is different for every person.

“It’s not about what it does. It’s about giving the experience, and they’ll discover what it does,” Hyde says. “There’s a natural intelligence that lives within the body, and once you get to a certain state, it starts to unpack.”