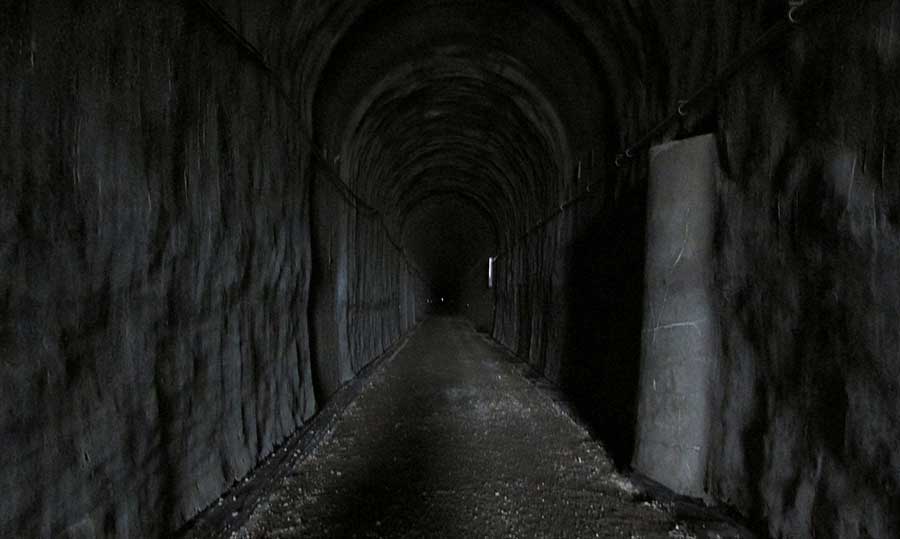 “Go outside and play.” That’s what her mom had told her. She knew it was grown-up code for, “Go away.”

Seven-year-old Dorothy knew her mom didn’t really care where she went, as long as it wasn’t there, so she went downstairs instead. The basement was more like a cellar because the ceilings were too low, it was always chilly, and the air smelled like dust and concrete after a rain. Someone had covered the unfinished walls with wallpaper that looked like a forest, which was rolling up at the edges. The orange carpet reminded her of hot lava. When her bare feet sunk into it today, it gave her the creeps. She jumped up on the brown couch and furniture-hopped her way toward the library.

Dorothy’s eyes caught something they’d never noticed before: the far wall in the living room. A fat crack ran the vertical length of the wall. The loveseat had been pressed up against it and her parents had draped an oversized mountain range poster over most of the crack.

She pounced to the recliner, and as it rocked, it nearly catapulted her across the room, but she clung onto one armrest and steadied herself. She leaped to the loveseat and ran her fingers along the nearly concealed crack. She followed the line up, up, up until she realized: It was the edge of an unfinished door. Her parents had clearly pushed the couch in front of it and hung a poster over it because they wanted to hide it.

She had to find a way inside.

Dorothy balanced on the back of the loveseat, dragging her small fingers along the edge of the crack in the wall. It was definitely a door, but it was much smaller than a regular-sized one. Half the size, at most. It started about a foot above the baseboards, too, making it feel more like a window, except for the antique, brass knob that poked out just above the back cushion.

“What in wonderland?” she muttered.

She peeked behind the edge of the poster, and it tore a little as she pulled it away from the wall. She reflexively jumped back and toppled off the furniture and onto the carpet.

“Pause!” she shouted into the air of the empty basement at no one in particular, signifying to herself that she was taking a hiatus from the floor-is-lava game. Her voice bounced off the unfinished, cement walls and returned to her in a softer boomerang of agreement: “Pause.”

She ran to the bottom of the stairs. “Mom?” she called up the staircase, searching the space with her call. As expected, no mom responded. Dorothy scampered back to the loveseat and quickly plucked the tacks from the poster. It fell to the carpet and instantly rolled back into its protective tunnel. She placed the tacks on the coffee table. Dorothy grabbed one of the hideous, floral-print arms and pulled, budging the couch slightly. She wedged her foot in the crevasse she had made and levered it like a car jack and then added her second leg until the loveseat was leg-length from the door. She grabbed the doorknob and turned.

She heaved open the miniature door; it stuck a little, because it was old and no longer smoothly fit in the frame. The scent of mold and heavy dust greeted her. And blackness.

The darkness zapped her curiosity into terror. Her bare feet froze at the threshold. She could hear her breath in a race with her heartbeats.

“Hello?” she whispered into the dust and mold, and just as quickly regretted it because what if someone actually responded? They didn’t. The darkness had no form, as it fanned out below the staircase. But her echo returned in a strange shape, distorted and delayed by the room’s vastness. Her boomerang reply seemed soft and stretched out, like a hiss: “Helllloooooooo.”

She squinted her eyes and adjusted her glasses, hoping to catch a clue of what waited in the darkness. Her right foot swung up over the ledge as if without her mind’s consent, and her held breath stayed behind in the living room. Left foot. Her brave feet jumped off the small ledge, carrying the rest of her unwilling body with them, and they landed on cool dirt. She shook her head.

The blackness slowly agreed, “Nope. … Nope. … Nope.” The silence in between words seemed to fizz.

But feet like hers were terrible listeners, and they still slid forward, searching the floor with her toes as the tour guides. Her arms stretched out in front of her, sweeping the air for something solid but only finding thicker darkness. Step by step painted layers of ink over the light from the doorway. The blackness wrapped tighter around Dorothy’s chest, and her heart tried to flail its way free. The pounding grew faster and louder until it sounded like a snare drum.

She stopped. This echo was misplaced, far too delayed to be an echo. Her imagination? Her heart stammered in her chest, and then she heard someone else’s heartbeat, also rapid and panicked. Maybe even quicker and louder than hers. She begged her curious, dumb feet to run away, but instead, they slowly began backing away from the dueling drum.

By the time her brain caught up with her body, she realized her feet were actually rather smart. That wasn’t another heartbeat. A life in this farmhouse had taught her to be aware of that noise. It was the buzz of a rattlesnake’s warning rattle. If she had run, she might have stepped right on it.

Her eyes darted across the cave beneath her house. The glow of the entrance seemed impossibly far away. She couldn’t see anything on the ground, but it sounded like the snake was in the pathway between her and escape. No way was she walking forward. Her back hit a solid rock wall, the edge of the room. At least she knew nothing was behind her. She began scooting left, keeping contact with the wall as a guide. She would stick to the perimeter and slide out that way.

She heard a shifting noise to her left, and then another rattle turned on. As if the Bat Signal had been flipped, what sounded like a dozen other rattles from every direction instantly joined in. They resonated off the cave walls, infinitely multiplying the noise. Dorothy’s hands gripped a sharp rock jutting out from the wall. It was a corner. An edge, veering off at a sharp right angle reminiscent of a hallway. She felt tears washing down her cheeks. She had uncovered a rattlesnake den underneath her house. That was why her parents had locked up the room. To protect her. She wished she had just asked. Now she had no choice.

She screamed. She screamed so loud that her throat felt like fire and her breath felt like smoke and her tears tried in vain to extinguish it all. She screamed in desperation and also fear of startling the snakes. She curled up her bare toes into tight balls and tried to hide within her own self in fearful anticipation of feeling the brush of a scaly body against her flesh. She tried to vanish into the wall. Her pedaling feet kicked up dirt, which teased her imagination when it landed back down on her feet, causing her to jump again.

“Dorothy?” A violently bright light flooded the room. “Oh my God, Dorothy.” The fear in her mom’s voice was worse than anything Dorothy could have felt on her own. “Oh my God.”

That’s when Dorothy saw it. This was not a cave or crawlspace below the house. The flashlight had illuminated the space to reveal a complex labyrinth of doors and hallways, like a below-ground tunnel system. She grabbed the gasp out of her mouth with trembling hands. She could also see the snakes. There was a fat den full of babies not ten feet away. She spotted three full-grown snakes, not the ten thousand that it had felt like. Three grown rattlers in the dark were still too many.

Her mom was pointing to the right: a clear opening away from the snake family.

“No, uh, go slow! Sneak around there,” her mom’s voice tried to calmly instruct.

Dorothy didn’t hesitate. Like a soldier, she swallowed her emotion and robotically marched to the right, only looking straight in front of her. Not at the snakes. Not at the tunnels. She had one goal and one goal only.

Her mom’s soft arms swept her over the threshold and placed her on the loveseat. She was crying. Both of them were crying. Her mom snapped up and slammed the door shut. She locked it and pushed the key into the pocket of her floppy cardigan.

“How, baby girl? Why? How? Are you okay?” Her mom’s flubbering questions embarrassed Dorothy.

Dorothy choked down her tears and sat up.

“Mom, what—what is that room?”

Her mom turned away to unroll the oversized poster. She didn’t answer. She pushed the tacks back into place, securing the peaceful image over the doorway. She brushed aside her remaining tears and sighed. She gazed at the mountain range.

“Hmm?” her mom asked, turning over her shoulder.

“Mom, I saw all of these tunnels and caves, like a whole weird, little subway world underneath our house. What is that?”

“No, dear.” Her mom grunted as she pushed the loveseat back against the wall, mostly concealing the door. Dorothy rode on the loveseat while it moved. The brass knob peeked out like a bad memory. Her mom continued, “I am so glad you are okay, Dorothy. You have to be careful around rattlesnakes. I thought I taught you how to listen for them and stay away. Where did you get the key?”

“But—” Dorothy’s voice shook with frustration.

“Let me make you a snack, Dorothy,” her mom said and patted the top of her head. “Would you like apples with peanut butter?”

Her mom cleared her throat.

Her mom’s always gentle eyes hardened as she glared down at Dorothy. She scolded through clenched teeth, “There. Are. No. Tunnels. Stop it.” Her voice bubbled like a growl. Dorothy had never seen such heat in her mom’s eyes before. It made Dorothy feel tiny and weak.

Her mom grabbed her hand and smiled, her kind, teacherly gaze returning.

“Come on, you,” she giggled and led Dorothy toward the stairs. “I have fresh orange juice.”

Dorothy’s feet didn’t feel as brave as they touched the stairs that were also the roof of the nightmare in her own home: not the snake den, and not even the tunnels. But the unknowing. The never knowing. The brass key swayed in her mom’s pocket.

Every step felt different. The hot lava carpet was no longer scary at all, not in comparison.