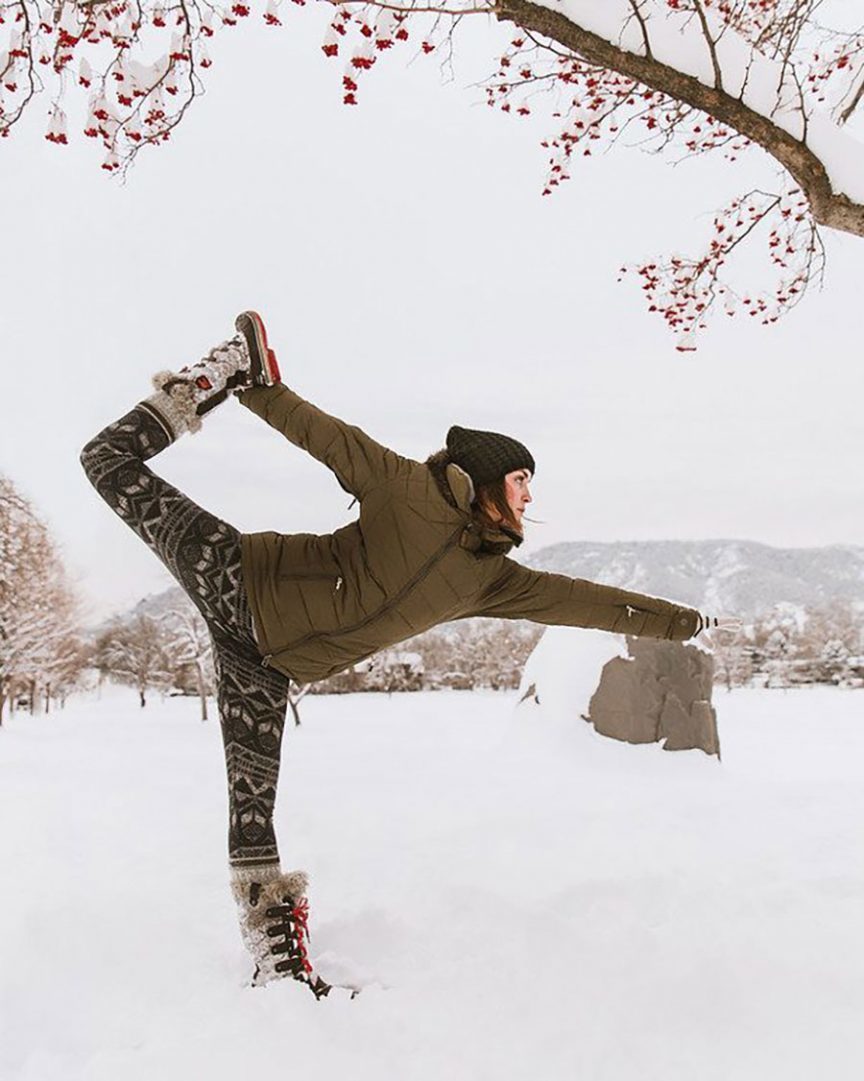 Boulder is multi-talented. But a couple things the city is really good at? Orchestrating epic snowstorms and striking yoga poses. Combine the two and you’ve got “snowga”— which is a trend that’s taking social media by (snow)storm.

Boulder gets nearly 90 inches of snow each year, with the most powder coming down in February and March, according to the National Climatic Data Center. And, when it comes to yoga, there are a number of studios throughout the city and Naropa University, a Buddhist-inspired college, offers a yoga training program. Our point? It just makes sense to give a chill workout a try here.

Defined, “snowga” is simply doing yoga in the snow. Do a #snowga search on Instagram, and you’ll find hundreds of frosty downward dog photos and some snow-kissed warrior poses. The trend seems like a natural progression, especially in Boulder. After all, Boulderites do yoga on paddleboards in the summer out at the Boulder Reservoir. And, there are yoga classes that take place in the city’s breweries, like a weeknight one at Sanitas Brewing Co., that combine the practice with craft beer.

The idea is you can do yoga anywhere and, if you’d like, turn it into a hybrid activity. Practicing yoga on snowshoes? Sure! Doing yoga stretches after gliding across the snow on cross-country skis? Why not?

With Boulder’s scenic backdrops, here’s where you can snap a #snowga photo on a snowy day. (Sure, it might not be totally zen to have your phone with you, but it does make for a great photo, and, hey, could be an exercise in gratitude). 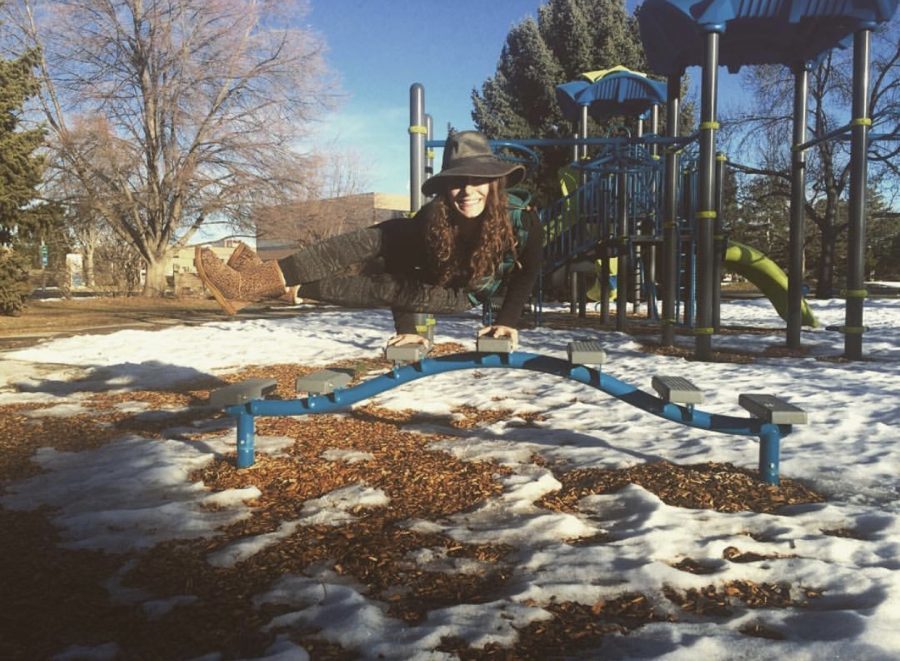 Taylor Trimarco strikes a yoga pose on a playground in the snow. Courtesy photo

Chautauqua Park: When it comes to stunning backdrops, Chautauqua and its trio of flatirons will put on quite a show for a snowga photo. Before you settle in for a meditative practice and if the weather isn’t too daunting, you can go on a hike in Chautauqua, which has eight trails giving you the option for a quick, down-and-back trek that’s about a mile or a longer hike to occupy an entire morning. You can get into your yoga routine at the base of the trailhead (locals love this scenic spot for everything from engagement photos to senior portraits) or head over to the nearby park. Chautauqua Park is located at Ninth and Broadway.

The top of Mount Sanitas: One of the best views of Boulder is from the top of Mount Sanitas. If there’s a little snow on the ground, you can take a moderate hike that’s around 45 minutes to get to the summit, where you can climb about the rocks and perch on top of one, taking in a panorama of Boulder while you meditate. You can find the Mount Sanitas Trailhead at Fourth Street and Mapleton Avenue. If the snow is coming down hard, the base of the trailhead is scenic in its own right.

Norlin Quad at the University of Colorado: The public campus is a cool place to wander about. You can take in the Klauder-style architecture defined by red-tiled roofs on buildings throughout campus and stop by the Dalton Trumbo Fountain, a popular spot for demonstrations that’s named after Trumbo, a filmmaker, free speech advocate and a famed member of the Hollywood 10.

At the center of campus, near the Norlin Library, is a must-visit: The Norlin Quad is a grassy lawn where you can find students slacklining, playing Hacky Sack and lounging. Soak up the college vibe without the headache of finals and essays. On a snow day the quad is a perfect patch for some snowga. Bonus: You’ll hear the bells chiming at the nearby Macky Auditorium. Here’s where you can find Norlin Quad on a CU map.

By the Boulder Creek: If the snow is coming down hard, it’s best to stay off the hiking trails. You can still settle into a scenic spot for some snowga, though, with the Boulder Creek babbling in the background. The creek runs through the downtown area, past the Boulder Public Library and Boulder High School. You’ll stumble on some picturesque parts of the river by the lawn at the library, located at 1001 Arapahoe Ave.

Scott Carpenter Park: Got a pint-sized yogi with you? Scott Carpenter Park, which is named after a Boulder-bred NASA astronaut, is a perennial favorite. In the warmer weather, there’s a community pool and a park with rocketship-themed playground equipment. In the snowy months, it’s a winter wonderland with a hilly slope perfect for sledding. You can find a quiet retreat in the park to strike some snowga poses before playing in the snow. 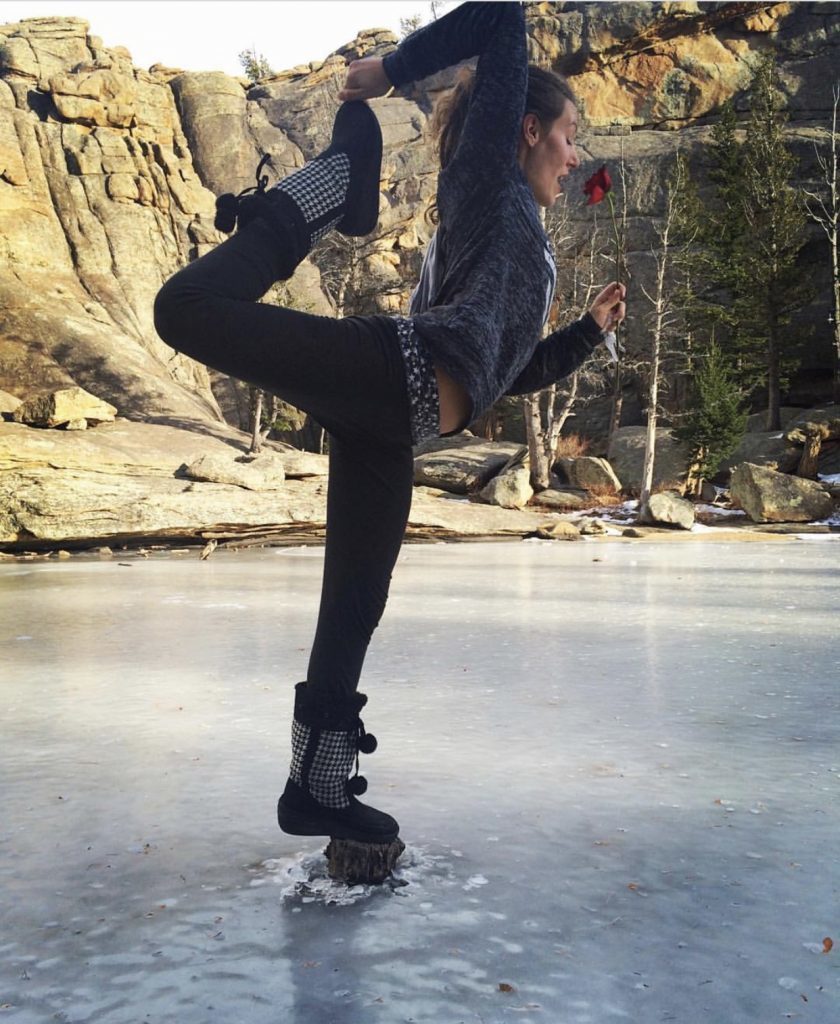