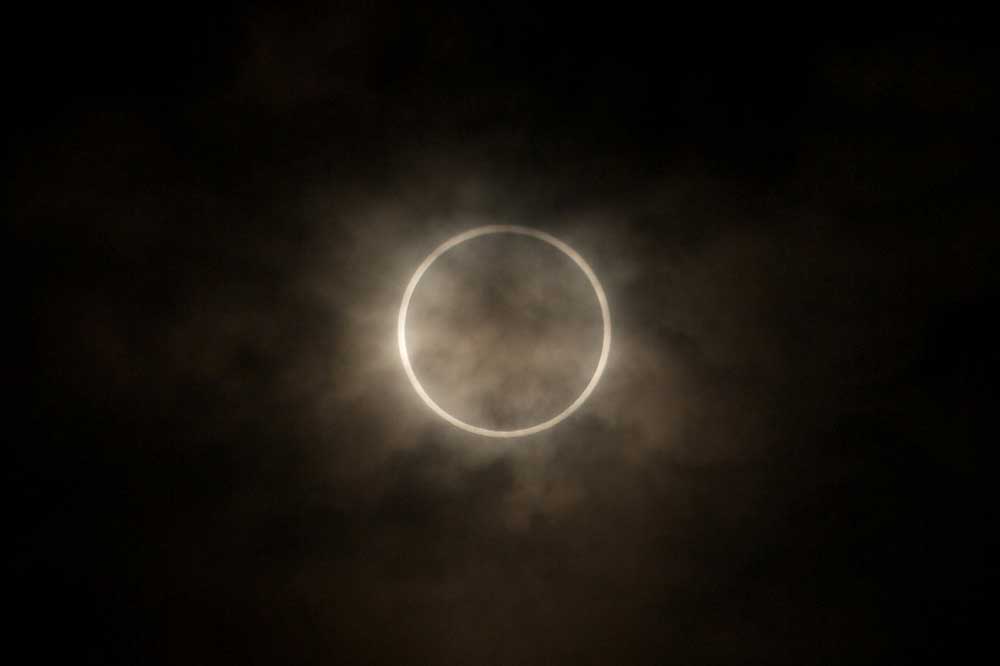 Those who have experienced a total solar eclipse call the event life-changing and compare the eerie cosmic scene to a shocking body blow, as the heavens appear to collapse while the world goes black.

“It is almost like a visceral punch in the chest, as if someone had put a hole in the sky,” said Victoria Sahami, owner of Boulder-based Sirius Travel Inc., which operates eclipse tours across the planet.

“This will be my 11th total eclipse,” she added. “The experience never gets old.”

About 850 people have booked passage on 17 buses procured by Sahami’s company to travel three and a half hours from Boulder to a patch of ranchland in Douglas, Wyoming. The tour sold out long ago.

Twelve million people live along a 67-mile swath of land that will experience the full eclipse. The path of totality stretches from Oregon to South Carolina. Hotel rooms along the route are fully booked. Some travelers have rented Airbnb spots for $1,000 a night. Campsites will be packed, and the roadways should be clogged as millions travel to bask beneath the dark sky.

Jared Fiel, regional communications manager with the Colorado Department of Transportation, said the population of Wyoming might double as eclipse worshipers jam the Cowboy State.

Travelers should gas up and prepare for long waits.

Locals unable, or unwilling, to travel can enjoy a partial eclipse by gazing skyward as the cosmic dance between the sun and moon takes place.

“If people can’t travel, the next best thing is to observe from your house or where you can see the sky,” said Briana Ingermann, educational programs manager with Fiske Planetarium at the University of Colorado-Boulder. “As long as you have clear viewing path, you should be good to watch.”

Fiske will have volunteers ready during the eclipse, which starts on Aug. 21 at 10:22 a.m. when the moon first touches the sun. It ends, locally, at 1:13 p.m. when the orbs separate.

“I have never seen a full eclipse,” Ingermann said. “I have heard (that) a few percent points can make a huge difference.”

Experts say Boulder will see the sky get darker — perhaps dark enough to pick out planets.

“It’s nothing like seeing a total solar eclipse,” Ingermann said. “When the sun is completely covered, you see the corona of the sun, and you can see silver streamers coming off the sun.”

Calls to the city of Boulder and several local bars and hotels revealed no planned events for the eclipse.

The St. Julien Hotel and Spa has noted the event in its newsletter. The hotel might also provide free protective glasses for guests.

“It is anticipated that many of our teachers will take their students outside to view this rare event,” said BVSD spokesman Randy Barber. “Our hope as educators is to use this real-life event to spark learning, not only on the day of, but perhaps for days and weeks afterwards.”

Experts emphasize the extreme need for eye protection during any solar eclipse.

“Until the sun gets completely shadowed by the moon, you have to wear safety goggles,” said Donald McCormack, an ophthalmologist at the Boulder Medical Center. “You have to wear the goggles to protect retinas, or you can get solar retinopathy, which is like a burn in the central part of the retina.”

McCormack made hotel reservations in Wyoming more than two years ago. He will travel to the event with his wife and son.

“It’s supposed to be the most stunning natural event anyone will ever see,” he said.

For additional fun facts about Eclipse 2017, see this story.