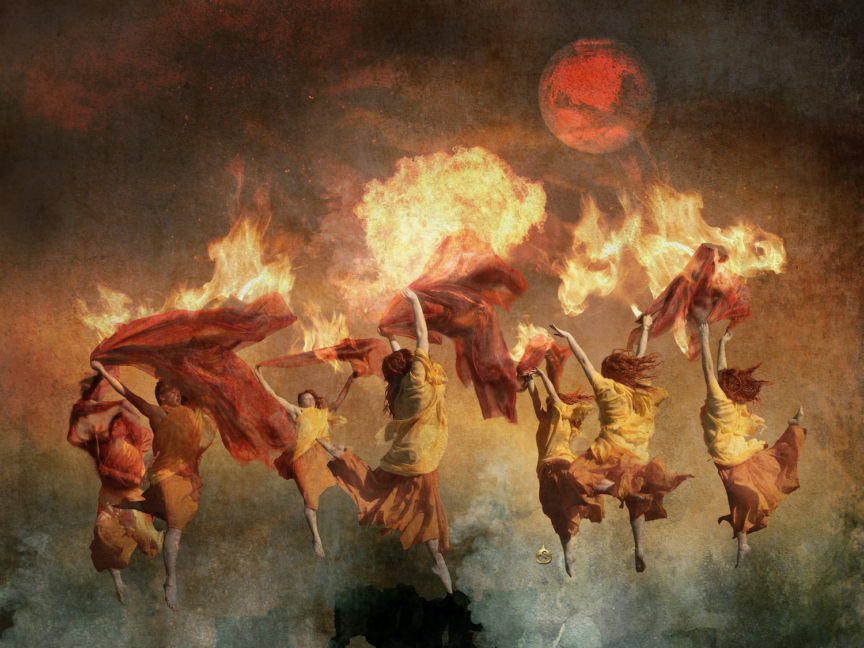 Some people break down into tears when they see the artwork.

Seven bodies leap and dance in a circle over ancient ruins. Their flying fabric is ablaze in flames. The painting looks like a classic. It could be in a famous museum in Paris.

The piece is called “Burning Down the House.” And like everything Sonya Shannon creates, each detail has deep significance. This message: Destroy the old and create the new. It’s about change.

Even without knowing the artist’s intention, Shannon’s artwork seems to speak to people when they see it: hanging on the walls of churches up and down the Front Range, in gift stores and book shops, at metaphysical fairs and in healers’ offices, on greeting cards and oracle decks. Even in the Masonic Lodge in Golden.

“They lose it in front of the artwork and can’t even tell you why. It just moves through them,” says Shannon, who lived in Boulder for 16 years and only recently relocated to Colorado Springs. “That’s what art should do: It transforms you. The original, sacred purpose of art is to connect us to the great mystery, the great divine at the heart of our experience here. … It changes how you understand life.”

Her art is spiritual. She calls it “visionary art.”

It didn’t start that way.

Shannon’s career began in New York as a 3D computer animator and animation director. She studied classical animation, where you hand-draw 24 pictures for every second. She quickly became intrigued by photorealism, which evolved into computer animation. She worked at Broadway Video, where “SNL” is created, and she taught at big-name schools, such as Pratt Institute and the School of Visual Arts. There, she taught students who would go on to become leaders in the industry, such as Carlos Saldanha (the director of “Rio” and all of the “Ice Age” movies) and Patricia Hannaway, who has a long list of film credits, from “Mulan” to “Lilo and Stitch” to “Star Wars.” She was the senior animator for Gollum in a “Lord of the Rings” film.

“I had fantastic students, and the teacher is always the one who learns from great students like that,” Shannon says.

Then 9/11 hit. While Shannon didn’t experience a direct loss by the terrorist attack, it forced her to evaluate her life and re-prioritize. She left the big city and moved to Boulder to immerse herself in nature, yoga, hiking, the mountains and a more spiritually-minded community.

Boulder changed the direction of her career. There wasn’t much of an animation industry here at the time. And here, she felt a spiritual opening.

“It was as though my old life was over,” she says.

But her passion for digital tools continued. At a time when many other fine artists were “running screaming from the computer,” Shannon says she saw an opportunity to use animation to bring to life the metaphysical ideas that she was understanding.

“We have this soul that is contained in our body and goes on after we leave this planet. There are other dimensions of the experience we can know about, and my role is to make that visible to the public. To reveal the unseen,” she says.

Meditation helps clear her mind, but she says she can’t pinpoint exactly where her inspiration and ideas come from. She says she feels like they’re a gift, and she considers herself a servant of a higher good.

As she explains on her website (sonya-shannon.com), “I chose each artwork specifically for its power to uplift, remind and help you explore the mysterious journey of your life.” 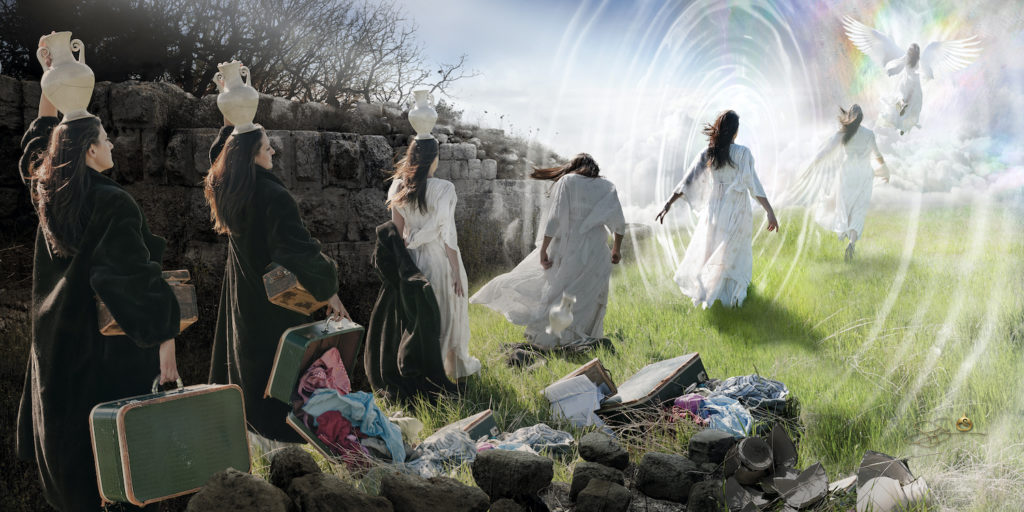 The Narrow Gate, by Sonya Shannon

Take one of her more famous paintings, “The Narrow Gate.” It follows the forms of a woman dropping her baggage and stepping toward an energetic field, a “narrow gate” to another dimension. An oversized print of this image hangs in the sanctuary of the Mile Hi Church in Lakewood. Shannon says she hopes this piece helps remind people to let go of the baggage (material, emotional, spiritual and mental) that can weigh you down and keep you from connecting with your higher self.

“The artwork is a kind of visual medicine. Every time you look at it, you can reset your orientation and remind you that there is more, that you know this other part of yourself,” Shannon says. 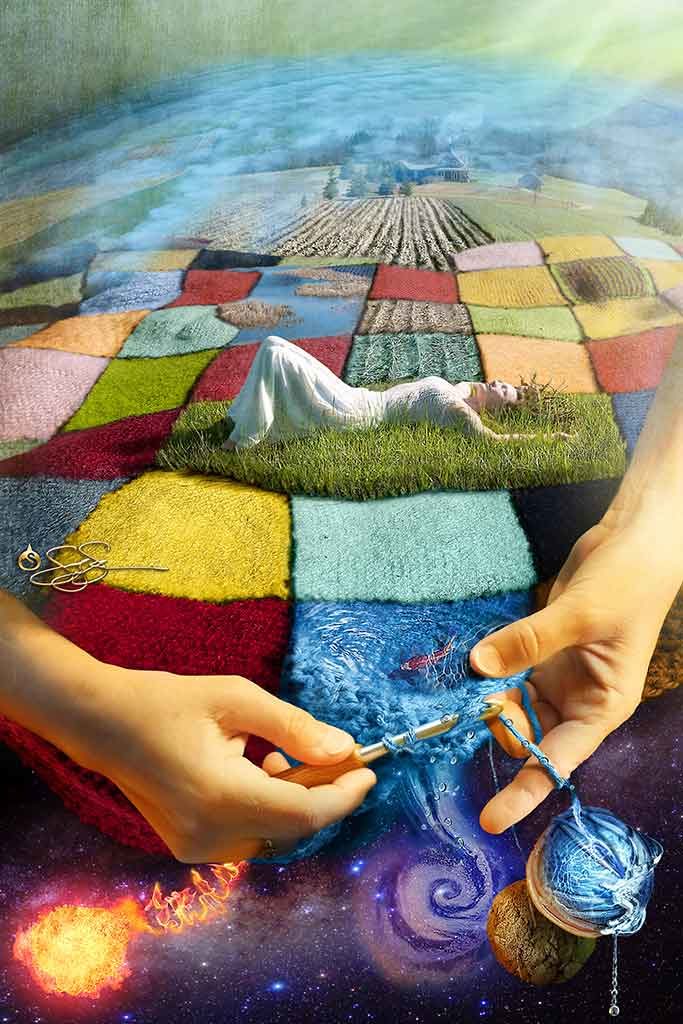 Another popular piece, inspired by Boulder, is called “Patchwork Earth.” It’s a fusion of dozens of images, including photos taken around Boulder, pieced together to make a patchwork. “Patchwork Earth” is about recycling, not just material things to care for the environment, but also recycling our own energy — turning the waste (negative experiences) into something new (wisdom, growth).

The people in Shannon’s artwork are intentionally chosen, too, down to the hands knitting in “Patchwork Earth.” They belong to a woman working through childhood trauma.

Shannon has also recently begun creating commissioned portraits, which she called Higher Self Portraits. Often, the requests come from people going through transitions or at new stages of life, or people who feel drawn to time periods or supernatural places that regular photography cannot capture.

“It’s not just what you see when you look in the mirror. We’re all so much more than we might think at any one moment,” Shannon says. “We are part of eternity. So how do we remember that?”

Answering big questions like that is what Shannon considers her job.

Ultimately, she says, she thinks all of the energy of the universe is love. So that’s what she says she pours into her artwork.

“I want to find that connection between people through the frequency of love,” she says. “My aim is to carry the Vision as clearly and powerfully as I can with the technologies at my disposal.”