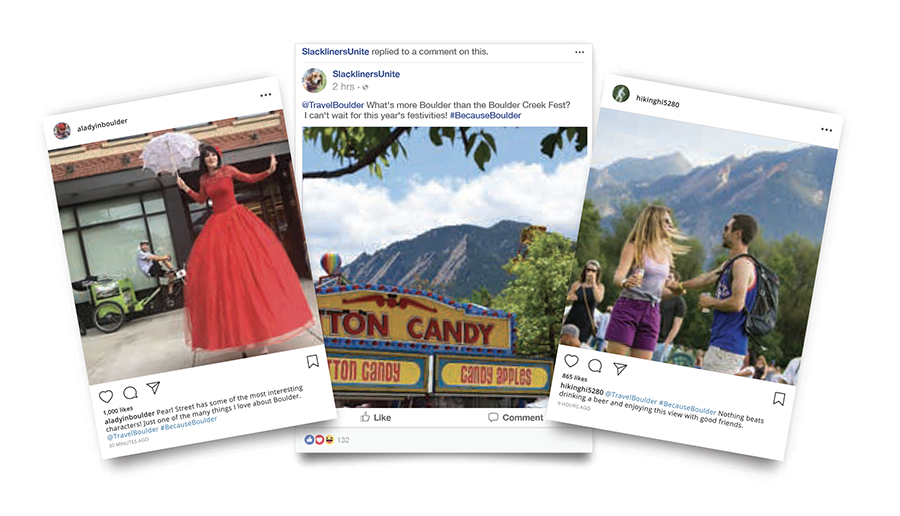 Share your Boulder-est Boulder pic for your chance to win!

Win two tickets to one show of the Chautauqua Summer Concert series! Share your best photo that captures the heart of Boulder with the hashtag #BecauseBoulder on either Facebook or Instagram, AND tag us at @TravelBoulder to be eligible.

There will be 7 giveaway dates. Each winner will receive two tickets to one Colorado Chautauqua Summer Concert Series concert.

Giveaway Dates are as follows:

Winners will be chosen by our Creative Director and notified via direct message on the social media platform they entered through.

See Rules and Regulations below.

This contest is being run by Travel Boulder. Entries will be collected throughout summer 2018, with 7 winners announced. Entrants may enter into more than one contest, but may only win once. Entires are accepted for the time frame listed above for the prize listed above. Entries expire at the end of the time frame. Photos may be resubmitted for more than one contest if they do not win. The winners will have to pick up their prizes in person. The winners will be announced by name, via social media channels including but not limited to Facebook, Twitter, and Instagram, as well as posted to TravelBoulder.com. Winners will also be contacted via direct message on the social media platform they entered through. Should the winner fail to respond to their notice of winning within 48 hours, they will forfeit their prize winnings and another entry will be notified of their winning.

All entries will be considered and the winner will be chosen by our Creative Director.

To be eligible you must share a photo on either Facebook or Instagram with the hashtag #BecauseBoulder and tag @TravelBoulder. Entrance into this contest and acceptance of the prize grants Travel Boulder the right to share the winners’ names and photos on social media, including Facebook, Twitter, and Instragram, with credit given to the photographer. Travel Boulder will not publicly release any participants’ information. Travel Boulder will only use information for the purpose of notifying the winner of their prize. This could include messages or tags via social media accounts including Facebook, Twitter, and Instagram. Odds of winning depend upon the number of entries received. There will be one winner per show.

The prize being offered is 2 tickets to the Chautauqua’s Summer Concert Series.

RE-SALE OF TICKETS BY CONTEST WINNER IS STRICTLY PROHIBITED.

NO PURCHASE OR PAYMENT OF ANY KIND IS NECESSARY TO ENTER OR WIN THIS CONTEST. Purchase will not increase chances of winning.