Joel Haertling says he has spent a lot of time defending his father’s work, since the architect died in 1984.

Yes, the buildings Charles A. Haertling designed from the ’50s through ’80s are different. One was inspired by a yucca pod. Another was designed to resemble barnacles. There’s a house that resembles aspen leaves and another inspired by mushrooms.

Unique art can be misunderstood, and Joel Haertling says the 40 or so Haertling buildings in the Boulder area have been appreciated by some, but misjudged by others. He thinks back on when one publication reached out to his family for a story about “weird Colorado.” That didn’t go over well.

“His architecture and designs are not weird. They’re aesthetically coherent,” says Joel Haertling, who lives in Boulder and works at the Boulder Public Library.

In addition to the nature-inspired themes, Charles Haertling’s work also followed mathematical and geometric themes. He was known for fusing modernism with organic architecture.

In addition to running his own architectural practice, he served on the architecture faculty at the University of Colorado and was even the mayor of Boulder. He died of a brain tumor at the age of 55.

Whether you like his architecture or not, no one can dispute that Charles Haertling quite literally thought outside the box — the typical shape of a building. He mostly built houses, although he also built churches and businesses, like an eye clinic in Boulder (aptly built to function like an eye). 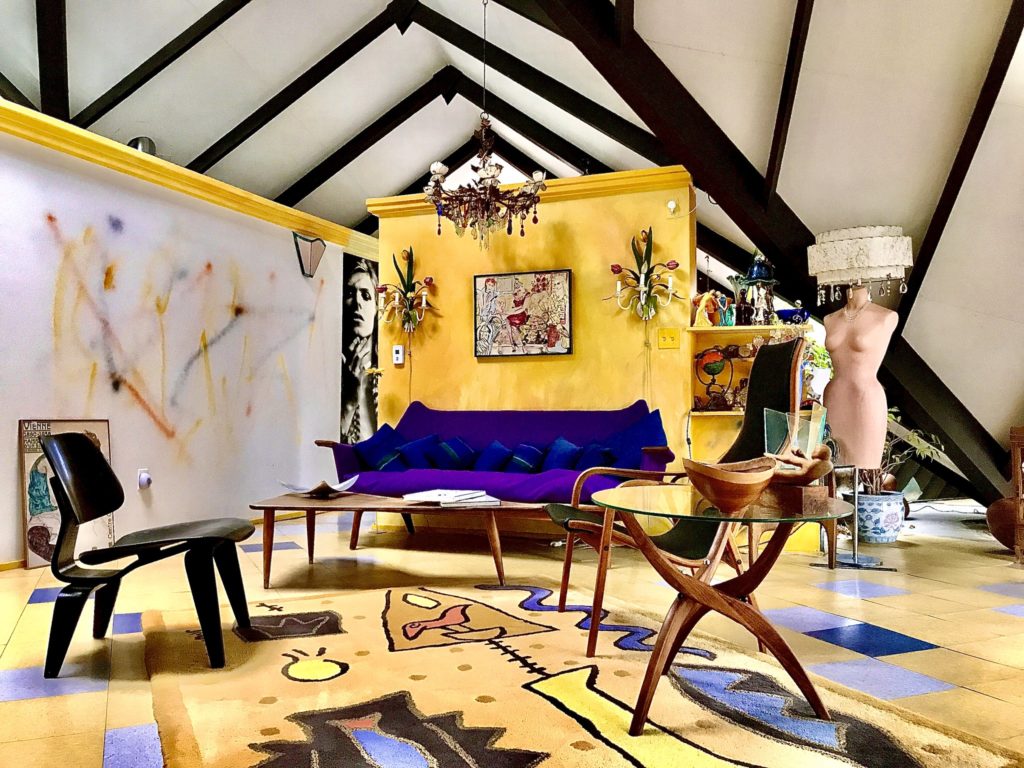 He called Boulder his gallery.

Don’t call them “homes.” Charles Haertling saw a distinction between a house and a home. He mostly built houses. When you move into a house, you turn it into a home, he believed.

He also believed, “A house is more of a home by being a work of art.”

“The design process is one painful exhilaration where one gives ultimate importance to the problem being solved, letting the problem itself be an integrated solution, which uses materials and structure void of distortion of uses untrue to the nature of the material or process, testing the boundaries of the application so as to give excitement, variety, adventure, human interest, and human relation to the project.”

Judi Lesta echoes that sentiment. Lesta, the owner of The Amazing Garage Sale in north Boulder, lives in the Noble House, built in 1958. This triangular house has been called the “space craft home.”

“It’s unique and unusual, like living in a museum or art gallery,” Lesta says.

Her house features 14 sides that create two intersecting peaks, based on sacred geometry, says Lesta. At the top of each point is a glass skylight. The roof consists of 16 large green triangles.

Inside, you won’t find a single right angle. Not even the triangular windows, not even the stove, nor the garden outside. 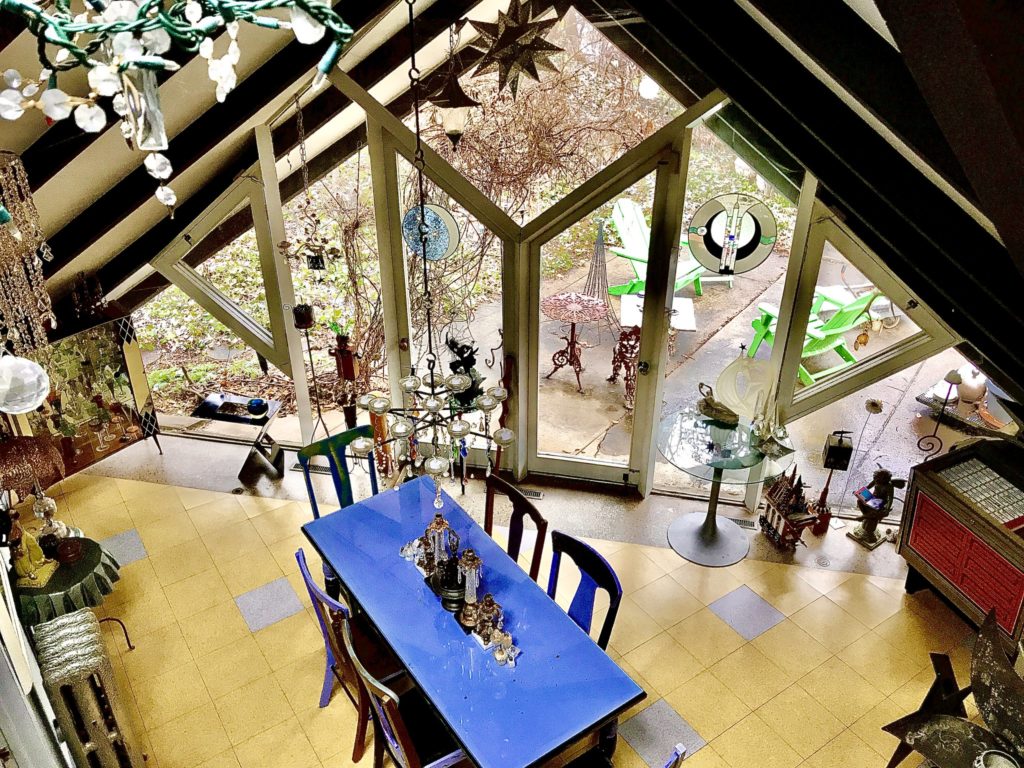 To Lesta, this didn’t pose any design challenges.

“It would be more of a challenge if it was a box with tall walls. I built my design around the house,” she says.

In that, she says she doesn’t have a favorite room or space. Everywhere is her favorite in the Noble House.

Other surprises: a sunken kitchen, cabinets that seem to float and a construction budget (back in the day) of just $16,000. Gregory Creek, on its way to Boulder Creek, trickles past the side of her bedroom.

Lesta moved into the Noble House (named after the original owners) when she came to Boulder in 1989. She has made some changes. When she moved in, she says it was black and white; she added bright colors on the walls.

“Some people won’t like that because it’s colorized and museums are supposed to be white and clean. Haertling himself might not have liked it. But I like it,” Lesta says. “It’s like a beach home, all yellow and sunny and beautiful.”

She says it’s inspiring to live inside a famous architect’s creation.

“I can watch out of the ceiling and see the moon and the stars,” she says.

All of the local Haertling houses are vastly different, she says — “all unique, amazing spaces in different ways.”

Indeed, Joel Haertling says, “The distinctive characteristic of my father’s work is every house looks different, but each is aesthetically coherent in a similar way.”

Even if you don’t know the architect’s inspiration, the buildings typically conjure images of nature in the eyes of people who see them. In that, Joel Haertling calls them a “local aesthetic resource” that is worth protecting.

“They’re a resource you can go to and get enlightened and in touch with how architecture can be different,” he says.

Most of the Haertling structures are on private land (and some are hidden by landscaping so they’re not easy to see), so you can’t just walk inside. Other addresses are not broad public knowledge. Still, you can put together your own, unofficial Charles Haertling driving tour and hope to catch a glimpse of some of Boulder’s most interesting architecture.

Here are some (but not all) of Haertling’s Boulder buildings, listed in order that they were constructed. This list excludes buildings beyond Boulder County. And please keep in mind that these are private residences and businesses — be respectful.

Here’s a closer look at a few of the highlights you can see throughout the Boulder-Denver area.

The Willard House (1962), 125 Bellevue Drive: This house, near Chautauqua Park, sits at the base of the Flatirons. It integrates into the natural site, with glass-lined angles intended to complement the rock ledges. The city of Boulder calls its composition linear and sculptural.

Volsky House (1963), 711 Willowbrook Road, Boulder: This circular house has been likened to a spaceship on Boulder’s hillside, with a 360-degree view from the curtain-less living room. Originally, neighbors submitted a protest to the city, saying it would harm their property values. Instead, it ended up in Life Magazine and launched Haertling’s fame, comparing him to Frank Lloyd Wright.

St. Stephen’s Lutheran Church (1963), 10828 Huron, Northglenn: This church, which is open to the public today, has a hyperbolic paraboloid roof. Its white swooping roof almost looks like elephant tusks. The church is on the National Register of Historic Places.

The Warburton House (1964) in Gold Hill: This house was designed to withstand the heavy winds in the area, perched at 9,000 feet in elevation. The solution: a curved, concrete yucca pod shape that the wind could just blow right over and around.

Our Savior’s Lutheran Church (1962), 915 E. Ninth Ave., Denver (Capitol Hill): This church’s design was based on a series of isosceles triangles.

Kahn House (1968), 760 Flagstaff Road: “The highly unconventional form strikes a balance between light, airy pavilions, and their solid, opaque foundations,” according to the city of Boulder.

Boulder Eye Clinic (1969), 2401 N. Broadway at the corner of Broadway and Maxwell Avenue in Boulder: Some people think this seemingly floating structure looks like a concrete white spaceship, but it was designed to function like an eyeball. The protruding windows originally housed eye charts. The eye clinic has since closed, but it has housed other businesses over the years.

The Brenton House (1971), 3752 Wonderland Hill Ave. on Maxwell Lake/the Wonderland Hills neighborhood in Boulder: This is the most famous Haertling house. It was inspired by the shape of barnacles, using polyurethane foam sprayed on a rebar skeleton. The pods project out from a center point, where there’s a garden. It appeared in the 1973 sci-fi Woody Alley film, “Sleeper.” Some people think this 6,400-square-foot house with curved walls, round windows and domed ceilings looks like a mushroom, earning it the nickname “the Mushroom House.” But in truth, it was inspired by the barnacles Charles Haertling removed from ships when he served in the U.S. Navy.

The Menkick House (1971), 165 Green Rock Drive in Boulder: This award-winning Usonian design house was built to complement a rock outcropping. The outcrop is integrated into the outside of the house in multiple areas. The Boulder Public Library’s documentary says the house had “major renovations” in the ’80s. The 5,780-square-foot house was on the market and sold in 2018 for $4.675 million, according to Realtor.com.

The Aspen Leaf House (1980), 52 Boulder View Lane, Boulder: Twenty-seven stone columns hold up 20-foot ceilings. The roof is shaped like an aspen leaf, with a copper top and wooden slats, like the veins of a leaf. This was the last house Haertling designed.

Want to learn more? You can watch a silent film, “The Design Process of Charles A. Haertling, Architect,” on the Boulder Public Library’s Youtube channel. Also check out haertlingarchitecture.wordpress.com/projects.