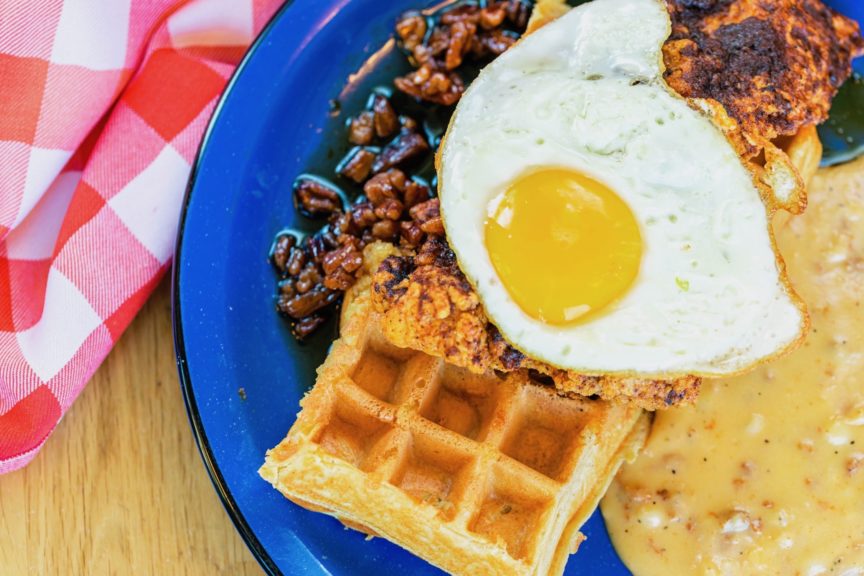 This isn’t your ordinary bar food.

Not that there’s anything wrong with jalapeno poppers and nachos to the side of a cold beer. But at The Post Brewing Co., the beer shares the spotlight with your dinner plate.

Post opened its first location in Lafayette in January of 2014, after two years of brainstorming. The inspiration behind it all: Simple. Good fried chicken and good beer.

“The idea of having the perfect combo of chicken and beer was the grounding of everything,” says Brett Smith, who began as the executive chef and partner. Today, he’s the operating partner, along with Dave Query and Bryan Selders.

That simple dream in east Boulder County has since grown to four local branches; starred on the Food Network with Guy Fieri; and earned impressive accolades at the Great American Beer Festival. The fried chicken has garnered its own share of applause, too.

“The fried chicken is the focal point of our menu,” Smith says. “We spent a lot of time and effort into developing that recipe.”

As the executive chef, he says he experimented with at least 50 different combinations of seasonings and flours before ultimately settling on the recipe that has earned nationwide notoriety. It just so happens to be gluten-free, too — a huge bonus in health-friendly (and gluten-unfriendly) Boulder County.

Smith says they never set out to pursue fried chicken to adhere to any specific dietary needs. This version was just the best tasting of them all.

The winning batter came from a blend of rice flour, potato and tapioca starch. Compare this to most fried chicken recipes, which rely heavily on wheat flour.

“We just loved how the crust cooked up and absorbed less oil,” Smith says. “It was less greasy and stayed crispy for longer.”

The bone-in chicken is prepared in a pressure fryer that is pre-programmed with the precise time and temperature; this yields a highly consistent result every time that Smith says locks the flavor in. Making the chicken in a pressure fryer instead of a traditional fryer is another distinguishing feature of the Post’s famous fried dish. The kitchen does use a traditional fryer to prepare other dishes, but the fried chicken stays out of it.

The fried chicken is actually a two-and-a-half-day process.

“All our food is really simple, but we’ve approached it with the mindset of how a classically trained chef would prepare that food,” says Smith, who has been a chef for 25 years. “All of the dishes, from the collard greens to the mac and cheese, we handle them properly, we use great products and we approach them with a chef’s mentality.”

In that, he says, the Post’s food is considered elevated comfort food. It starts with approachable dishes everyone’s familiar with, but then takes them to another level.

He says the Post brings the same mindset to its beer.

“Having the two paired together is a winning combo,” he says. 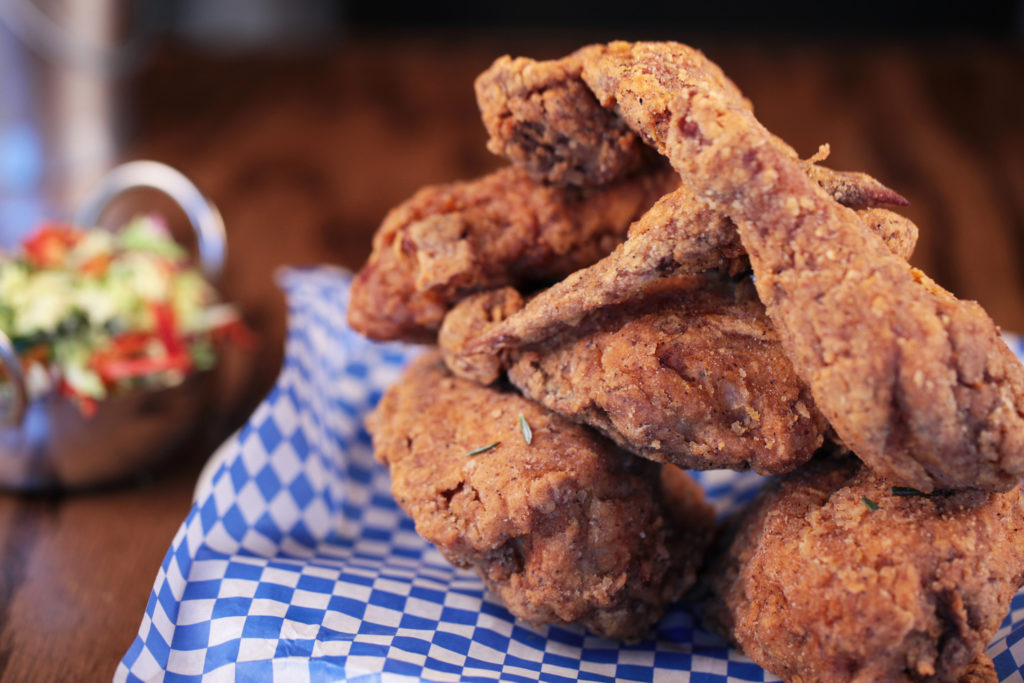 There are several ways to enjoy your fried chicken at the Post. The fried half-bird is served with pickles and chorizo country gravy (make it “Nashville hot” if you like a kick). The chicken tender basket comes with fries or slaw. Then there’s the to-drool-for chicken and waffles, topped with pumpkin seed butter, chorizo country gravy, chile-cherry chutney and maple syrup. (The Post is also beloved for its brunch every Saturday and Sunday.)

The original Post Brewing Co. opened in the old VFW hall right in downtown Lafayette. It was such a success that a second branch launched in Longmont two years later. A Denver branch (in the Rosedale area) popped up the following January, and Boulder’s branch at 2027 13th St. in downtown opened on Halloween night in 2017.

The Lafayette branch features the largest on-site brewery, and Boulder’s restaurant added another brewery into the mix, as it took over a previous brewery space. The Longmont and Denver destinations don’t have a brewery attached, but they do serve beer at all locations. Just no fun brewery tours.

Indeed, while the gluten-free fried chicken gets a lot of attention, The Post Brewing Co.’s beer is far from second fiddle. The brewery just won its third Great American Beer Festival medal (a bronze) in a row for its dry stout. Even as a relative newcomer in a brewery-heavy state, Post has earned GABF medals four out of the last five years.

In the spirit of the original mission, the beer menu began simply, with several balanced, well-crafted beers. The goal was to make highly drinkable beers that went well with fried chicken. This meant no huge variety of beer types or crazy, strong IPAs; they didn’t want to overpower the food, Smith says.

“That was an awesome way to start, but as time has gone on, the two brewers we have now like to tinker around with all kinds of different styles,” he says.

Today, the Post still offers the drinkable beers it was originally known for, but it also has created the likes of a filtered, hazy IPA; a Kolsch with tart cherry and makrut lime; a smoked stout; a tart wheat ale with blood orange; a schwarzbier with black tea; and a black IPA, among others. 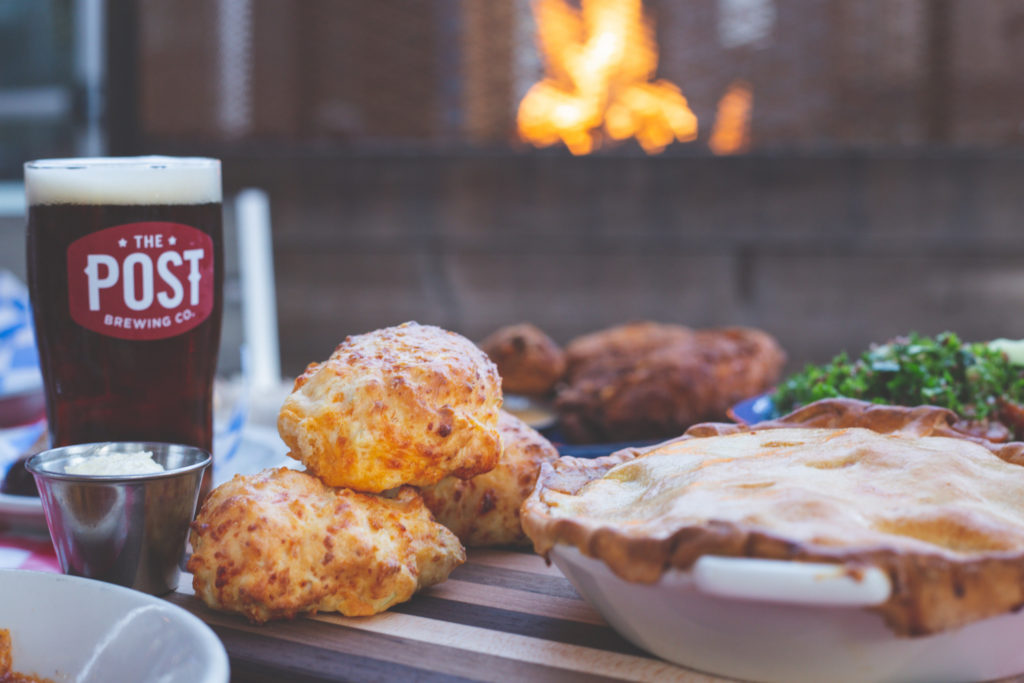 The Post’s beer menu isn’t its only claim to fame. In 2018, the Longmont location was featured on the Food Network’s show, “Diners, Drive-Ins and Dives.”

Of course, famed foodie Fieri filled up on the fried chicken, but he also tried the chicken chicharrones. This appetizer is a tasty take on fried chicken skins, served with pinto bean hummus, roasted poblano, garlic mojo, veggies and Texas toast. The skins are baked in the oven first, then crisped in a fryer and dusted with a special house seasoning. Smith calls the hummus a “Colorado twist on traditional hummus.”

The TV spot was not the end of the “Diners, Drive-Ins and Dives” story, however. Turns out, that show has a cult following, inspiring people to travel around the country to try the restaurants featured on the show.

“A couple weeks ago, we met a guy from Virginia who was in Colorado to his 12 of the restaurants from ‘Diners, Drive-Ins and Dives.’ He had a book that features different recipes and had people sign it,” Smith says. “It’s cool to be part of that family.”

Smith says he knows every time the Food Network replays the episode highlighting The Post Brewing Co., because the Longmont restaurant will, without fail, see a surge in visitors that week.

Still, amid the Fieri fame and beer awards, Smith says his proudest achievement is not as flashy: “Just being able to take care of our team and guests, having hundreds of people who have worked for us and thousands of guests who have joined us,” he says. 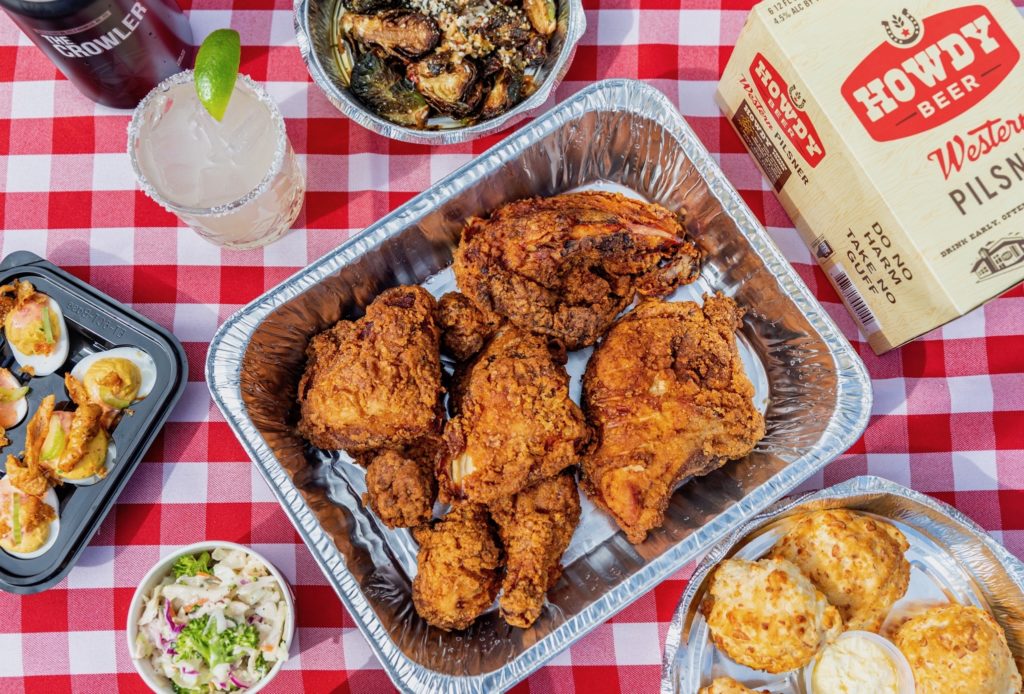 For him, success is having a warm and hospitable place where people can come enjoy fried chicken and beer.

Simple. Just like the original dream that started it all.

What Do You Order?

We asked operating partner Brett Smith what he likes to eat at The Post Brewing Co.. Here’s what he orders: