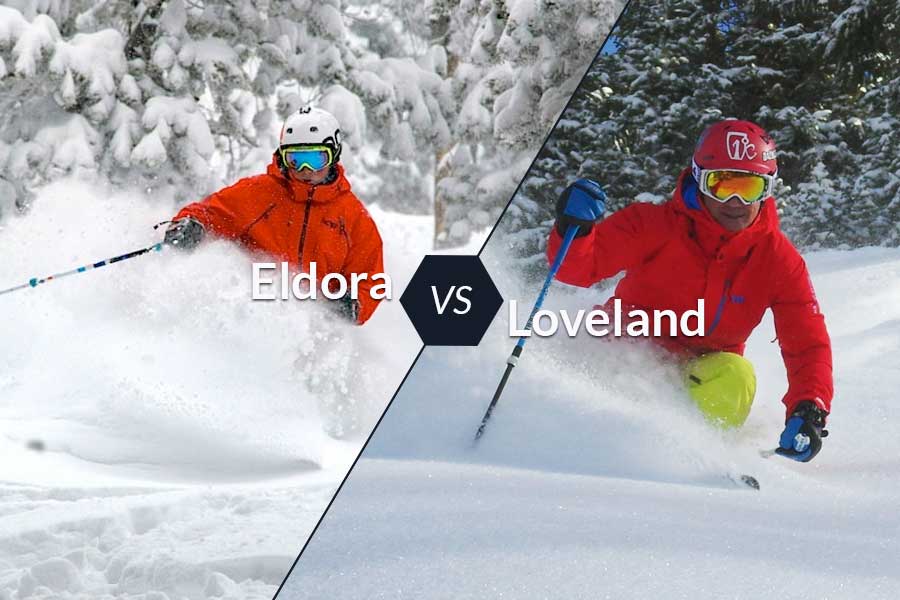 Whether you’re visiting Boulder this winter or you live here, there’s a good chance you’re taking advantage of the powder. Colorado has some of the best skiing in the world. And while Boulder, itself, does not have a ski resort, you can find slopes nearby.

Two of the closest ski resorts to Boulder are Eldora and Loveland Ski Area. Although other resorts, like Winter Park, look closer on a map, Loveland is actually just over an hour away by car.

There are so many ski resorts in Colorado that it can be hard to decipher between them. Here’s a look at two great resorts close to Boulder: Eldora and Loveland.

Eldora is the closest ski resort to Boulder. It’s even in Boulder County. It’s just under a 40-minute drive (20 miles) from Boulder and is even easy to get to if you don’t have a car.

You can take the RTD Ski-n-Ride bus from Boulder directly to Eldora seven times every day during the ski season. The bus also has special places to store your ski gear, making transportation easy and convenient. It’s cheap, too: only $9 for unlimited trips per day.

A huge draw for Eldora is you can go skiing close to Denver and Boulder without having to fight the traffic on Interstate 70, which can be a total nightmare during ski season.

It’s one of the rare ski resorts on this side of the continental divide.

Another easy way to get to Eldora is via ski carpool.

Eldora is smaller than many of the state’s bigger resorts, but it has some great runs.

It gets 300 inches of snow per year and claims to have the state’s best snowmaking system. Another claim to fame: 100 percent of the terrain is groomed, more than any other ski resort in Colorado.

Eldora has ski trails for all levels, from beginner (check out Little Hawk Mountain) to expert (the aptly named Challenge Mountain).

Eldora is not actually a full town, although it’s close to Nederland. On the ski resort itself, there’s nowhere to stay and only a few places to eat and hang out. If you want to stay nearby, it’s best to stay in Boulder.

The four places to eat in Eldora are:

Skiing and snowboarding are the heart of Eldora. In addition to the lifts, check out the Eldora Nordic Center for cross-country skiing, as well as snowshoeing and skate-skiing. You can also hike through the area’s forests.

You can also go shopping for small goodies and supplies at the center.

Don’t get confused. There are actually two Lovelands not far from Boulder. The city of Loveland, north of Boulder, has nowhere to ski. You want to head west, to the Loveland Ski Area. Loveland is just about an hour and 15 minutes from Boulder, much closer than many other ski resorts. But that totally depends on traffic and when you go.

The bad news is you will still have to venture on crowded I-70 to get to Loveland. The good news is you won’t have to drive on it for too long, and you don’t have to go as far as the Eisenhower Tunnel, where the weather can make crazy quick turns for the worse and you can end up trapped on the other side of the mountain. Loveland is just past Georgetown (of course, there tends to always be slow traffic right around Georgetown, which can make that last stretch of the drive last much longer).

Loveland is for skiers. Period. It’s not fancy or pretentious. It claims more snow than any other area resort. It gets much more snow than Eldora: 422 inches on average per season (that’s more than 35 feet). Because of its plentiful snow, Loveland has one of the longest ski seasons in the United States. It’s always one of the first in the nation to open and last to close.

Loveland also tends to be a lot less crowded than the other ski resorts up I-70. You won’t spend as much time waiting in line, but you still get the mountain experience.

Although Loveland has slopes for all levels of experience (and it has great lessons), it’s not really ideal for beginners. Only 13 percent of the slopes are appropriate for beginner skiers. A whopping 41 percent are for intermediate and 46 percent are advanced.

There are two places to explore in the Loveland Ski Area: Loveland Basin and Loveland Valley.

Skiable terrain: 1,800 acres (more than twice the size of Eldora)

History: Loveland is more than 75 years old and it’s family owned and operated.

Lift tickets: Loveland is one of the cheaper ski areas, usually about half the cost of other resorts in Summit County. Bonus: Loveland offers free snowcat ski tours. Advanced skiers can take a Cat up the Continental Divide and explore the open spaces. If you’re an advanced skier, this is an amazing, unique option to go skiing for free.

Like Eldora, there aren’t any lodging options directly in the Loveland Ski Area. The closest options are in Georgetown, about 12 miles away. It’s a bit of a far drive to head back to stay in Boulder after skiing, but it’s totally doable.

There are quite a few places to eat and drink in the Loveland area: seven options in Loveland Basin and two in Loveland Valley. They’re all casual, but some have great views and there’s even an outdoor barbecue.

A local apres favorite is the Loveland Rathskellar, with eight beer taps, cocktails and a sports bar atmosphere with big screens.

Skiing is the heart of Loveland, but the area is also fun for hiking and snowshoeing. In fact, there are about 100 hikeable acres.

Loveland also has slopeside events all season, such as live music, entertainment, races, BBQs and more.