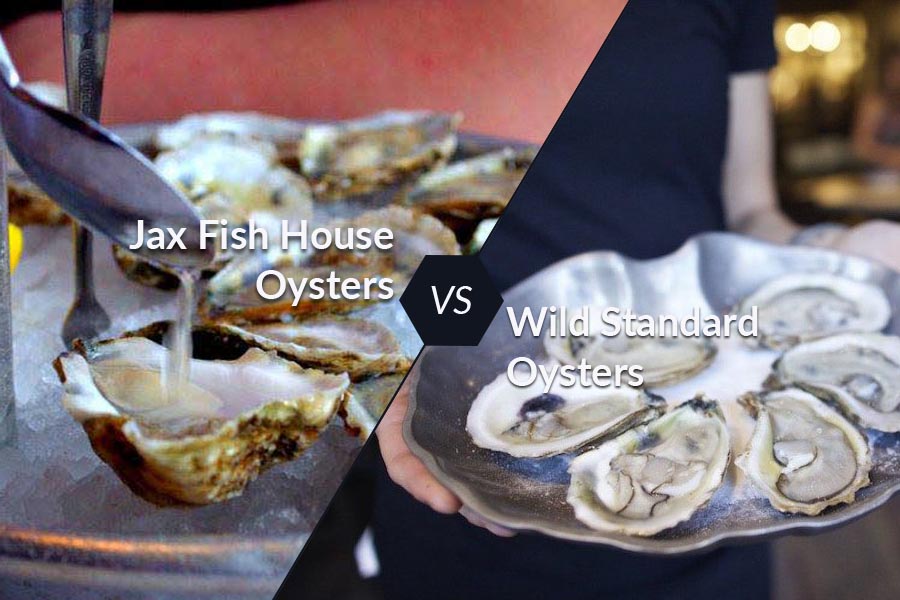 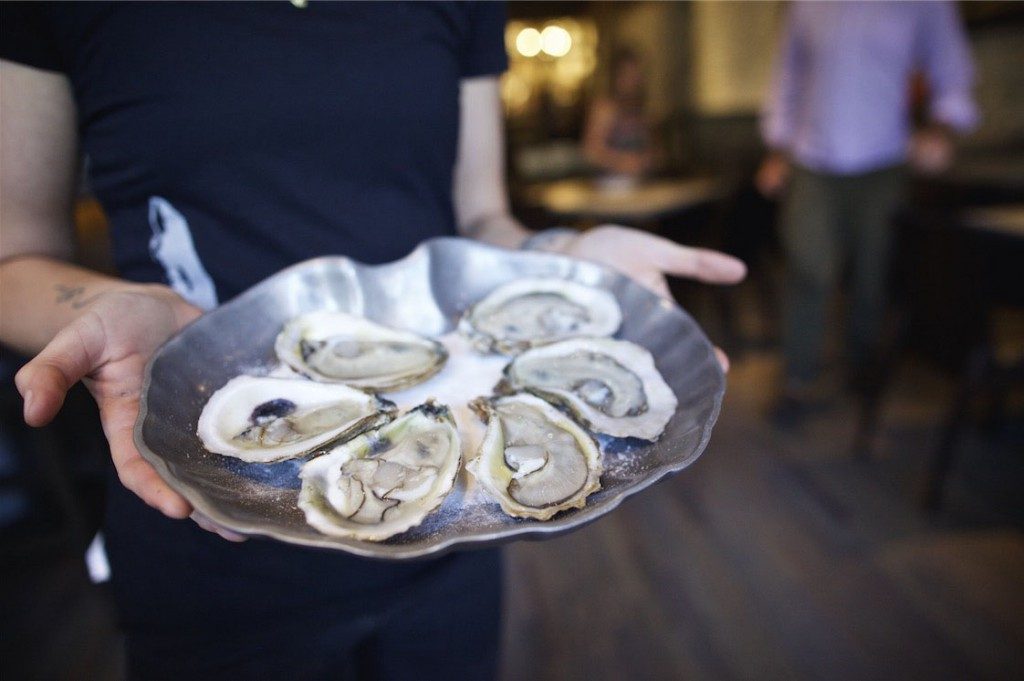 Boulder doesn’t have an ocean nearby — not even close — but if you want fresh seafood, local restaurants have the hook-up.

Oysters could be considered a multivitamin. They’re naturally low in fat, high in omega-3s and a good source of vitamins A, B1, B2, B3, C and D. Four to five medium-sized oysters supply the recommended daily allowance of iron, copper, zinc, iodine, magnesium, calcium, manganese and phosphorus, experts say.

The National Heart, Lung and Blood Institute even suggests oysters as a smart choice for a low-cholesterol diet. Three ounces of cooked Pacific oysters have 85 milligrams of cholesterol, and east-coast varieties tend to have even less, as low as 32 to 53 milligrams per three ounces. All oysters have less cholesterol than other seafood like lobster and shrimp.

Both Jax Fish House and Wild Standard on the west end of the Pearl Street Mall specialize in seafood, and both are known for their oysters. Both offer happy hours with amazing oyster deals, too. And they’re all but across the street from each other.

So how are you supposed to decide where to go?

Well, while these two restaurants may seem to offer the same thing steps apart from one another, they’re actually quite different. To be real, they’re both incredible, so you can’t go wrong.

However, here’s a closer look at the oysters at Jax and Wild Standard to help you see what sets them apart — so you can go get your seafood fix with confidence. Or better yet, oyster hop from restaurant to restaurant. 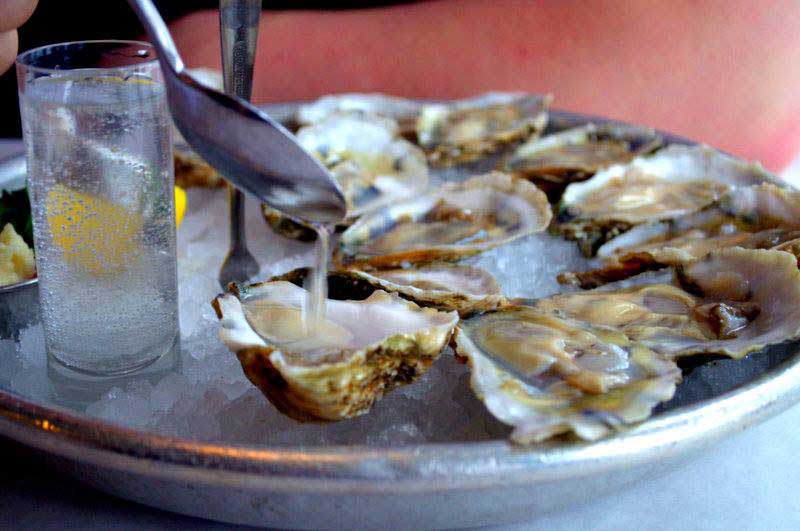 Happy hour special: $1.50 oysters all day Monday and 4-6 p.m. Tuesday-Sunday. You can also get oyster shooters (with vodka and Bloody Mary mix) for $2.25. Jax offers more happy hour(s) per week than Wild Standard due to its Mondays.

How fresh are they? “We search tirelessly for the freshest oysters,” says Nik Hanks, media manager for the Big Red F Restaurant Group, which runs Jax.

He says they pick the best of the best and fly them in daily.

“As soon as they hit the dock, they are transported to a plane and then to our door — from sea to table in under 24 hours,” Hanks says.

Because Colorado is essentially in the middle of the two coasts, you can get fresh oysters from either coast. This provides the unique advantage of being able to enjoy equally as fresh oysters from both coasts in the same dinner.

What kind of oysters? On any given day, Jax will offer between four and 10 different varieties to be shucked, fresh to order.

In addition, Jax serves oysters you can’t get anywhere else. It has its own proprietary oyster, the Emersum. Cultivated exclusively for Jax Fish House by Virginia’s Rappahannock River Oyster Company (a family-run company since 1899), the Emersum Oyster is “the new paradigm in boutique oysters,” Hanks says. “It is perfectly balanced with consistently sweet, salty and creamy qualities, and is the freshest oyster ‘this side’ of either coast.”

Because the Emersum Oyster is sustainably grown and harvested at a specific point in the Chesapeake Bay, it has its own “merroir.” Oyster aficionados will appreciate this. This oyster was the result of months of research.

How sustainable are they? Jax takes sustainability seriously. Jax only works with sustainable fisheries. Period.

It claims to be the first restaurant in the state certified by the Monterey Bay Seafood Watch (which promotes sustainable seafood), and in fact, the restaurant’s executive chef is on the Monterey Bay Aquarium’s Blue Ribbon Taskforce. She works with other sustainable chefs around the country and she is an activist for the cause. She has spoken with government officials about sustainability. Her advocacy work led her to be invited to join the James Beard Foundation’s 11th-annual Chefs Boot Camp for Policy and Change.

Jax also works with other sustainable seafood certification groups to spread the word about the ocean’s health.

Other highlights: Jax also has a special Oyster Club. Members can order fresh oysters directly through this club, and they are taught how to shuck, store and more.

Jax offers a mobile oyster bar that you can hire to set up at events. 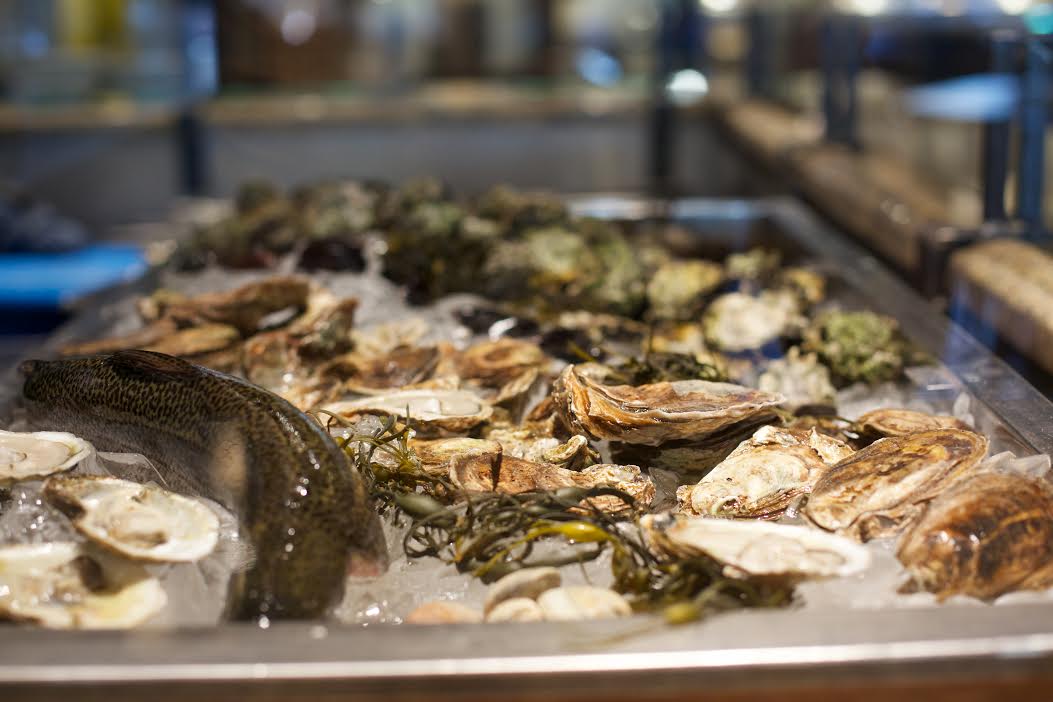 Happy hour special? $1 chef’s choice oysters from 3-5 p.m. every day. That’s one hour earlier and 50 cents less per oyster than Jax, so while Jax has a longer happy hour, Wild Standard’s is cheaper.

How fresh are they? Oysters are sourced weekly from around the country to ensure the freshest oysters from each region. When Wild Standard receives the oysters, they are typically three to five days old. They will not keep them on ice longer than two to three days.

What kind of oysters? The oysters rotate and vary depending on availability and season. The Happy Hour Raw Bar is also different than the on-ice menu selection.

The current happy hour oyster selection includes Chunu oysters from Virginia, which the restaurant describes as having “mild brine, high salinity and sweet, grassy finish.” Wild Standard recommends pairing these with a glass of Le Fay D’Homme Muscadet, a slightly acidic but not aggressively so wine, with hints of white fruit, citrus and blossoms.

Wild Standard’s current on-ice oyster selection includes Malpeque ($3.50 each; sweet with high brine; from Prince Edward Island, an eastern Canada province), Island Creek ($4 each; full-bodied with a clean finish; from Massachusetts), Dabob Bay ($3.50 each; high brine with mild sweetness, on the larger side; from Washington) and Kumamoto ($4 each; sweet with mild brine; from Washington). Try them with a side of taro chips for a crunch.

Not sure what to get? Order the oyster sampler. Wild Standard typically serves its oysters raw on the half shell and over ice. Each selection is served with a mignonette sauce made with shallot, black pepper, red wine vinegar and white wine. This adds a nice balance to the briny, somewhat creamy oysters. You can also get them with a horseradish sauce and cocktails sauce.

How sustainable are they? Wild Standard is also known for responsibly sourcing its seafood from sustainable fishmongers. In fact, Wild Standard claims to be the only restaurant in Boulder that has earned the Marine Stewardship Council’s strict certification. All seafood meets the council’s high standards.

According to a Wild Standard spokesperson, “The oysters Wild Standard serves come from very sustainable environments. Oysters typically feed on natural, tiny particles like plankton and cause little to no damage to their growing environment. They also don’t require any chemicals or antibiotics to farm successfully. Overall, oysters have very little impact on their surrounding environments, and Chef Heap only sources from farmers who use sustainable practices.”

Other highlights: For a variety, try The Hold, a menu item with both east and west coast oysters, plus other seafood (from shrimp to lobster tail to octopus escabeche).

Another fun fact: 95 percent of the decor inside Wild Standard was recycled or reused. Even the ceiling beams.