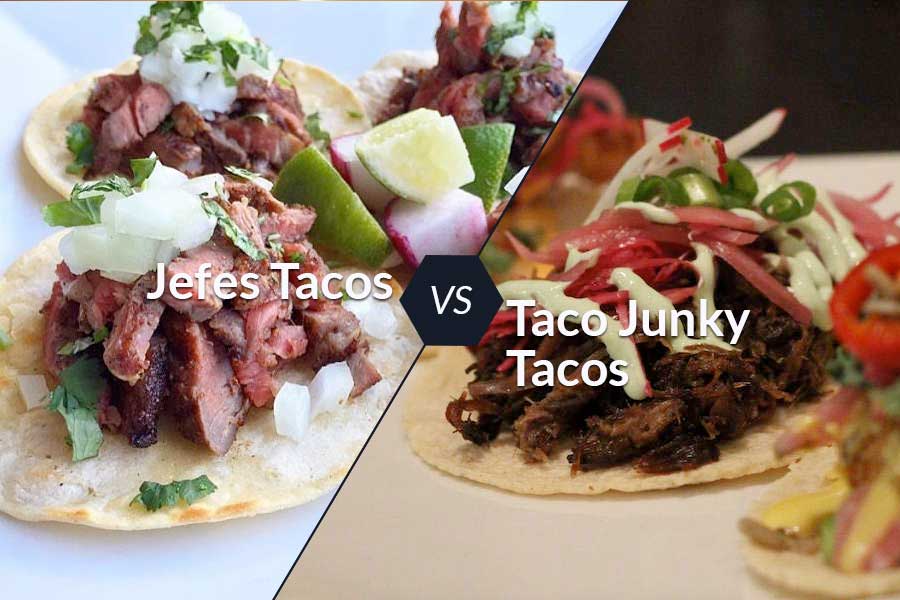 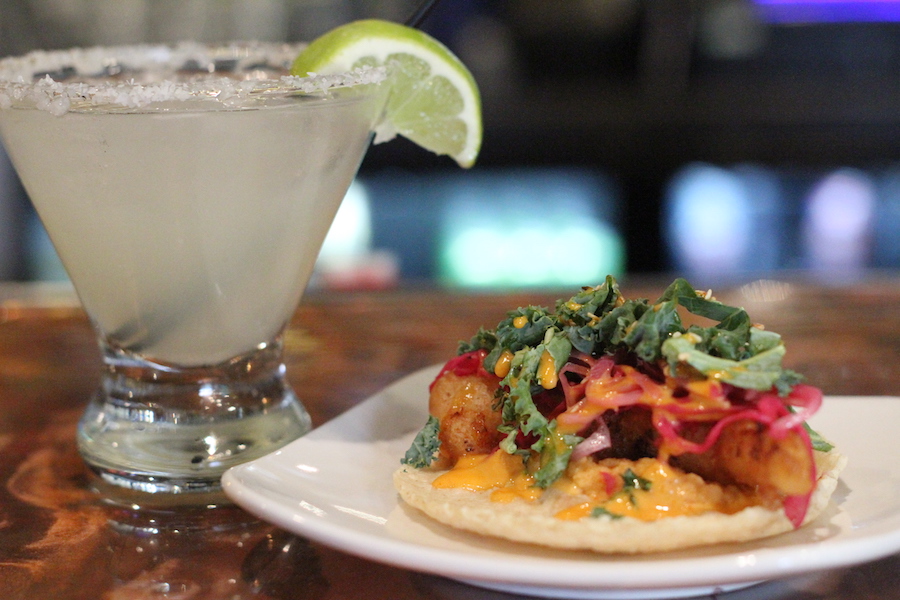 A taco and marg at Taco Junky in Boulder. Courtesy photo

So many tacos, never enough time.

About 21 percent of Coloradans identified as Hispanic or Latino in 2013, and that influence has enriched the foodie scene here, especially in the form of street tacos. There’s no shortage of taco opps in Boulder County, from classic and authentic to creative and innovative. There are so many options that it can be hard to pick.

In the name of journalism, we did some excruciating hard work for you and dove deep into investigating all things taco. We focused on two different taco shops, Jefe’s in Longmont (because Longmont has a particularly robust Hispanic population, at 26 percent) and one of the newer taco shops on the scene, Taco Junky, on University Hill.

To be real, both restaurants are bomb. But in case you can’t visit both and have to pick, well, we’re sorry. And here’s how they differ.

Location: 246 Main St. in downtown Longmont. Jefe’s is a small, easy-to-miss purple door in the southernmost edge of downtown. Keep your eyes on the east side of the street, in the block past the Dickens Opera House.

You can usually find parking pretty easily, although it’s worth coming early and strolling through downtown. If you’re looking for an authentic Hispanic and Latino experience, stop by the Carniceria El Cerrito near Main Street and Ninth. A bit more north, at 1118 Main St., is the La Panda Bakery II. 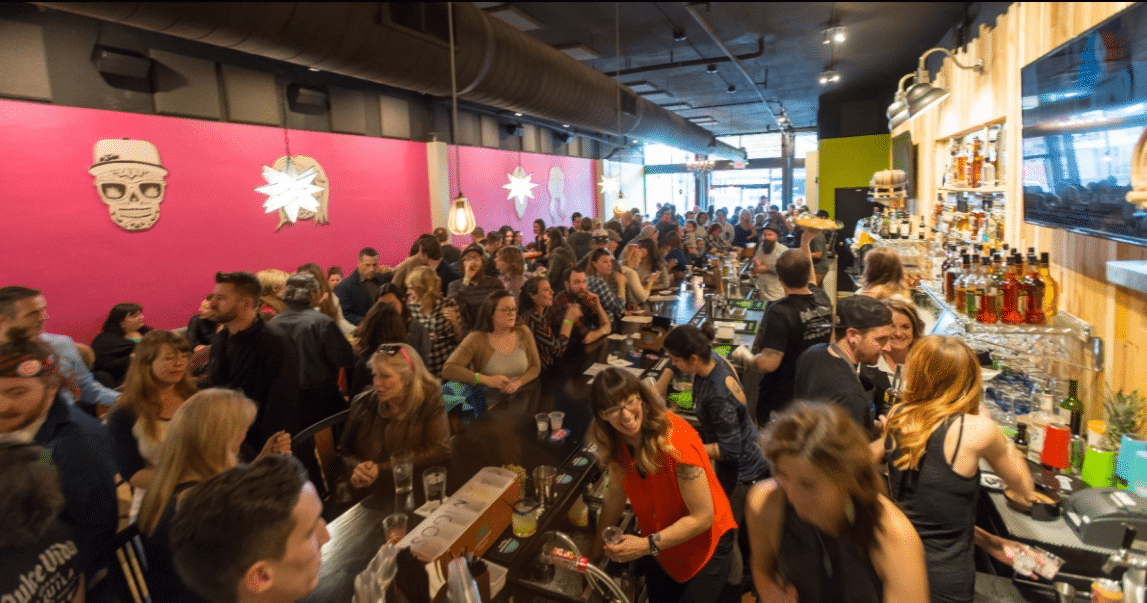 This is Jefe’s. Bright, busy and social. Courtesy photo

Atmosphere: Jefe’s has an upbeat, celebratory vibe. The first thing you’ll notice is it plays pretty loud, old-school (’90s) hip-hop all day, every day. That gives it a California vibe and tends to attract a younger population than some restaurants in Longmont.

Jefe’s is casual, brightly decorated with jewel tones and sugar skulls and always seems to be busy. 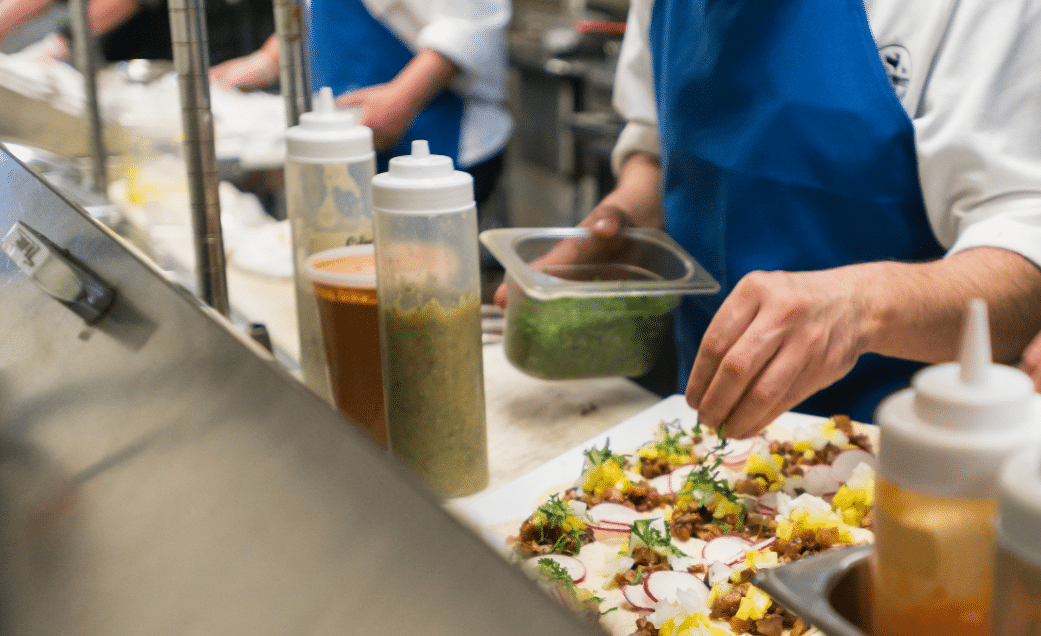 Claim to Fame: The location in Longmont gives Jefe’s automatic cred, which is justified. The chef/owner, a classically trained and certified executive chef, was born and raised in the taco capital of the country, the San Joaquin Valley of California.

“Growing up part of the only white family in a Mexican farming community, authentic Mexican restaurant and taco trucks became my comfort food, my soul food,” says chef Sean Gafner.

After spending nearly 20 years as a fine dining chef, he decided to open the taco shop that Boulder County was missing, using his knowledge of authentic street tacos combined with his expertise with modern cuisines of the world.

Another unusual feature is Jefe’s social entrepreneurship. Since opening, it has always donated 10 percent of its profits toward funding adoption. The other co-owners have two adopted children and want to help others who want to adopt. 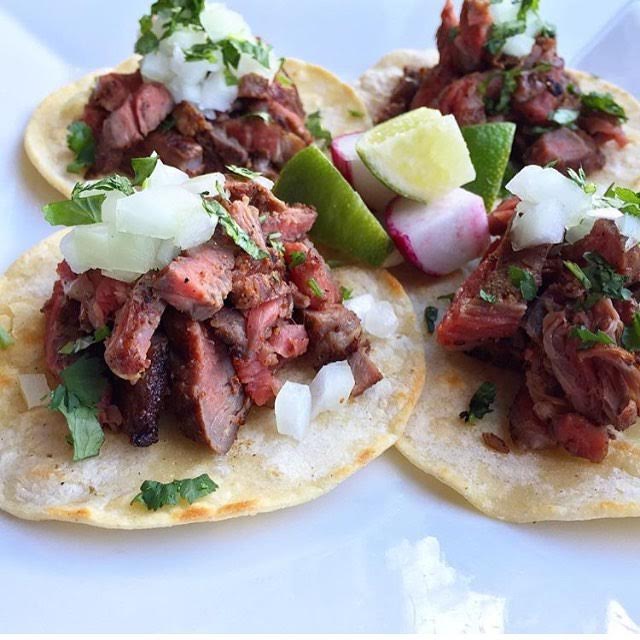 Menu: The menu has both authentic and modern tacos and drinks made with fresh, local ingredients. Simple street tacos start at $2, and on Taco Tuesdays they’re just a buck.

Tacos aren’t all Jefe’s makes. For apps, you can warm up on blistered shishito peppers with chile-lime salt or a spicy pickle mix with jalapenos, carrots, onions and jicama.

Unique Tacos: For something more adventurous, try seared ahi tacos: Hawaiian tuna seared rare, served with avocado, cilantro, ginger-lime slaw and sriracha aioli for a little kick. If you dig that fish flava, the mango shrimp taco is our favorite. The tempura fried shrimp, fresh mango, red bell pepper and basil are tossed in a honey glaze for a perfect fusion of sweet and indulgent. It could almost be a dessert.

If you’re a breakfast burrito fan, try a taco version. The chorizo and egg taco puts chorizo and a sunnyside-up egg, fried potatoes and cilantro crema in a taco shape.

The Buffalo Chicken taco has a strong local tie, using Red Bird Farms chicken thighs (fried) and tossed in buffalo sauce. Add blue cheese slaw, scallions and tomatoes — and our tip: Order it Jefe style, which is two tortillas held together by melted cheese in the middle. 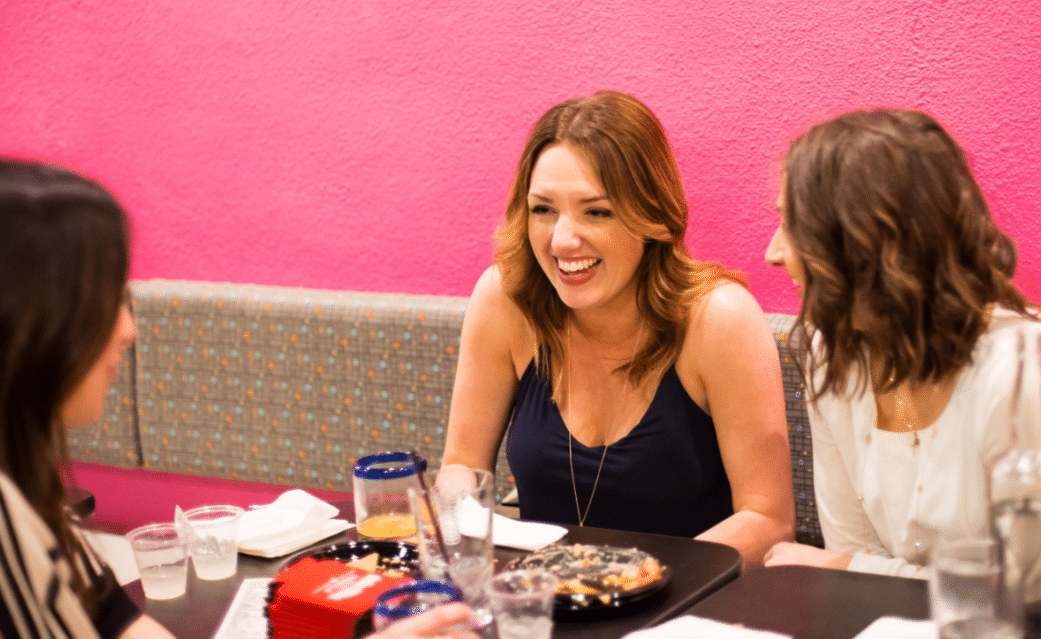 A woman drinking one of Jefe’s cocktails. Courtesy photo

Drinks and Dessert: Jefe’s has a full bar. A fresh-squeezed margarita starts at just $5. Classic and simple. Bonus: You can order all flavors of margarita, from spicy to fruity, a marg flight if you can decide and margs by the pitcher if you have a group. A totally Boulder spin on a margarita is the Kombucha-Rita, which adds in Knucklepuck Kombucha.

Or if you want something more hip, try a Mezcal cocktail (the restaurant has plenty of options), like the Killer Bees (Montelobos Mezcal, fresh lemon juice, house-made honey syrup and Arette Blanco).

An innovative, Mexican-inspired drink that works perfectly with tacos is the Spanish Harlem: Chipotle-raspberry-infused Dulce Vida Blanco mixed with Jefe’s own aged reposado, orange bitters and caffe amaro. Another is the spiked horchata. Mmm.

A cocktail you might not expect to find at a Mexican restaurant is the Papa Doble, with Moraga Cay white rum, fresh-squeezed grapefruit and lime juice and maraschino liqueur.

If you’re not drinking, we love that Jefe’s sells bottles of Mexican Coke Classic and Orange Fanta.

Dessert is simple here. Churros. Fried ice cream. Of course. And then there’s a Churro-style Choco Taco. Just order it and thank us later.

Inside Tip: If you want screaming hot, ask your server for add-ons to make your salsa pop. Also ask about the fermented hot sauce, which isn’t on the menu. 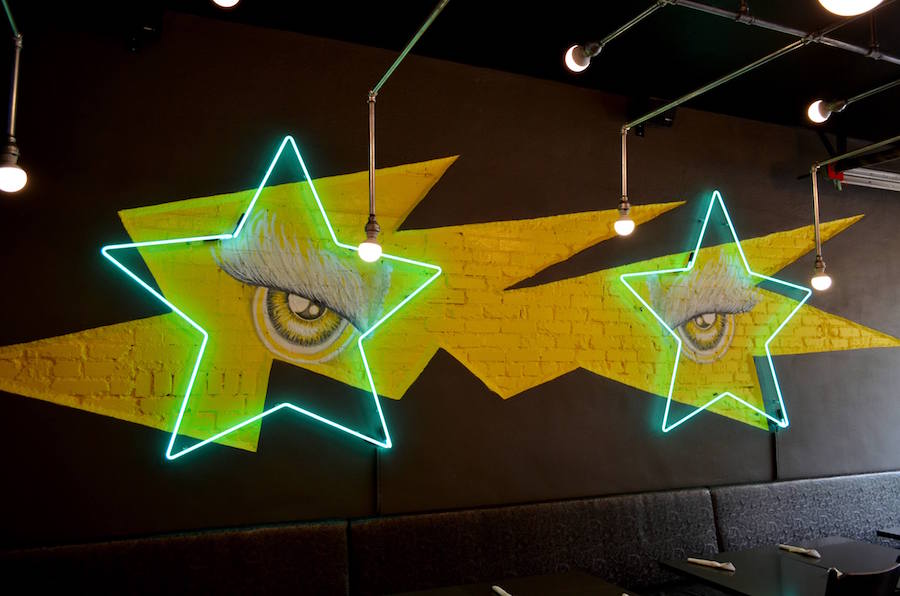 Location: 1149 13th St., in the heart of University Hill near the University of Colorado campus. Needless to say, this restaurant draws a ton of college students. But that’s not the target demographic. Taco Junky targets young adults who want a lot of unique flavors and quality tequilas without breaking the bank. The goal: to offer this part of town a little bit more than just the typical cheap food and booze in a plastic cup found near a college campus.

For visitors, it’s fun to walk through The Hill, which has some quirky shops and quality coffee spots. It’s a totally different vibe than the Pearl Street Mall, but it’s authentically Boulder all the same. Use this as an excuse to walk across Broadway to campus, which has beautiful lawns and architecture, as well as other attractions. 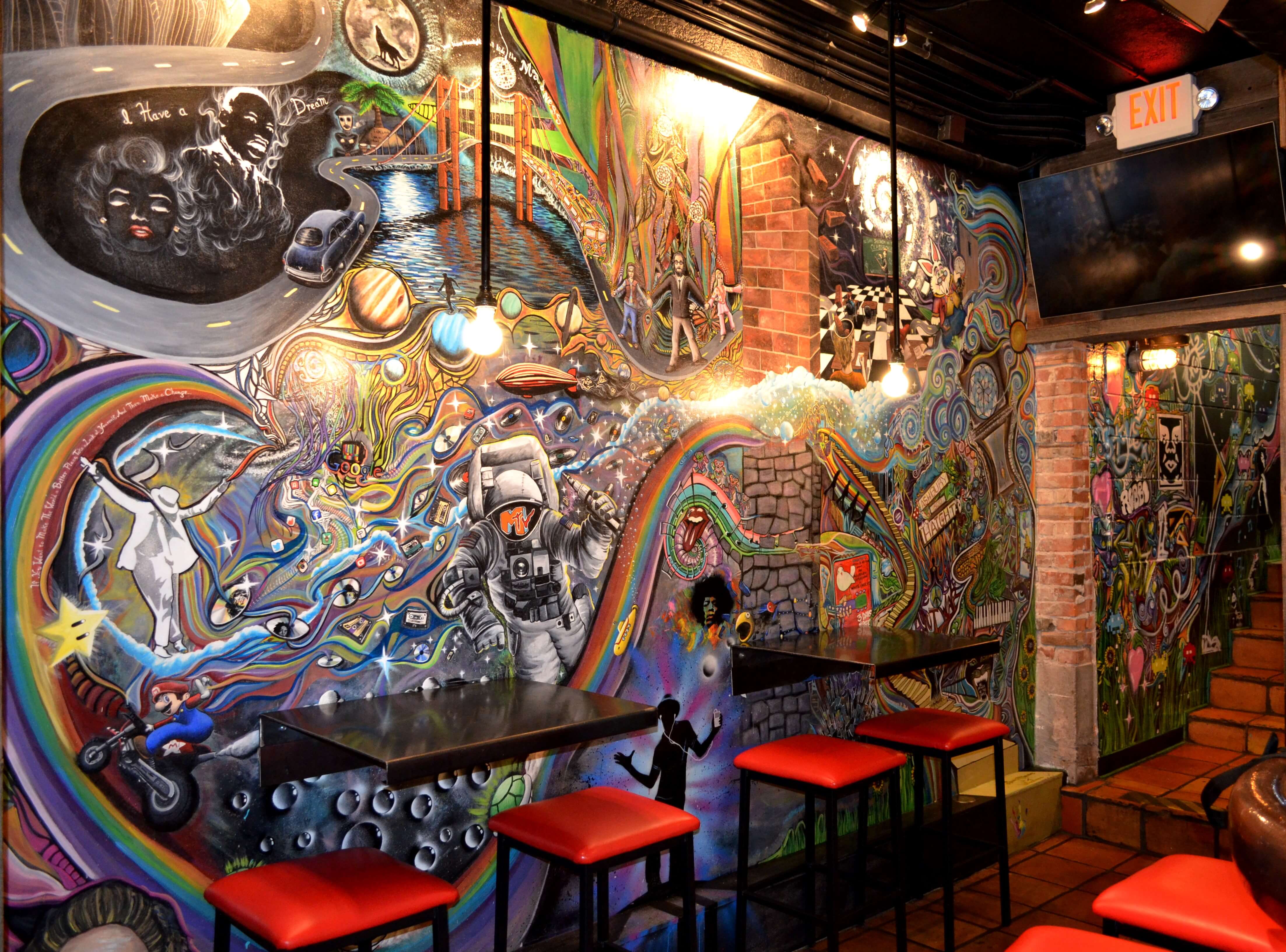 A mural on the wall at Taco Junky. Courtesy photo

Atmosphere: Taco Junky aims for the feeling of a “postmodern eclectic taqueria/cantina.” It is a cozy space renovated with bright colors, urban art, industrial accents, glowing bottles of tequila and an oversized mural painted by local artists. Taco Junky is casual and playful, upbeat and modern. It plays modern hits. The bathrooms are super colorful and industrial, too.

The main mural on the wall is actually a timeline; it’s called “The Journey Through Creative Evolution,” by two local artists, Laura McGowan and Will Thompson. The building dates back to the 1920s.

Claim to Fame: Taco Junky won Dining Out Magazine’s best margarita in the Denver/Boulder area in 2017. It was also named the Best New Restaurant in 2015 and was awarded the best salsa in Boulder in 2017. 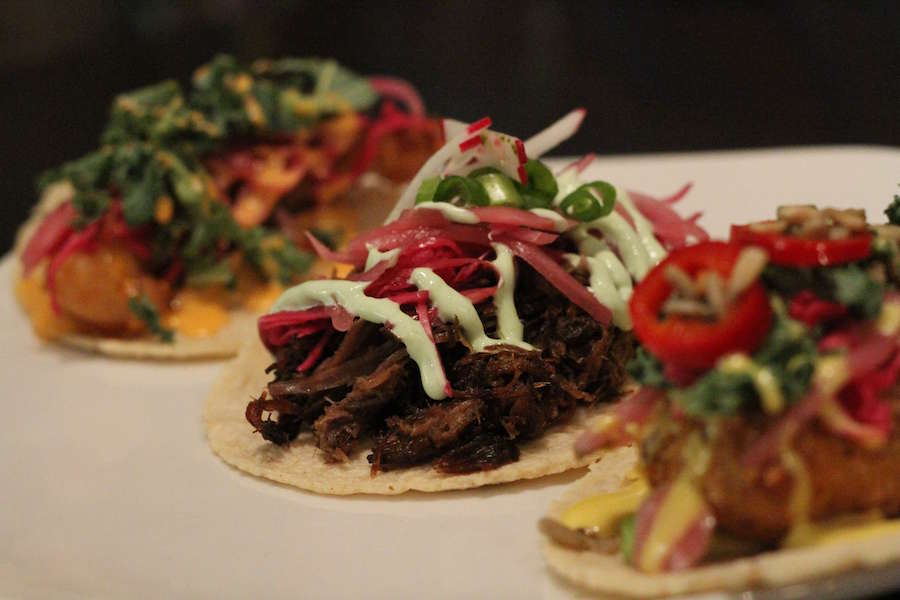 Menu: You will find a few authentic tacos, but the aim here is gourmet creativity, using a wide spectrum of international flavors. The menu changes every season. This is not a classic Mexican restaurant; it’s more Latin-inspired.

Choose between four different types of salsa and four types of guac, everything made in-house. So are the tortillas.

In addition to tacos, we love that Taco Junky serves Mexican street corn, served with cotija cheese and flavored with spicy paprika.

Unique Tacos: This is where Taco Junky shines. Why can’t curry chicken be served in a tortilla? Oh, it can here. How about a taco made with bison ribeye? Or braised oxtail.

Many of the innovative variations have an Asian influence, like the Banh Mi (the best-seller), made with Vietnamese-style marinated pork loin, served with pickled veggies and charred scallion aioli; the B+Omega3 (grilled salmon with edamame pesto and caramel soy bok choy); and the GGS, which is ginger garlic scallions with kale, kimchi and spicy aioli. Or our favorite, the HTX, a little bit Asian and a little bit Southern: sriracha fried chicken (yup, that’s a thing), Southern-style slaw and charred jalapeno rach. It’s not too spicy and is pretty light and non-GMO, for fried chicken.

Get even more creative in your dips with options like coconut guacamole (pico, coconut and lime), BLT guac (applewood smoked bacon, tomato and cilantro) and watermelon ceviche. 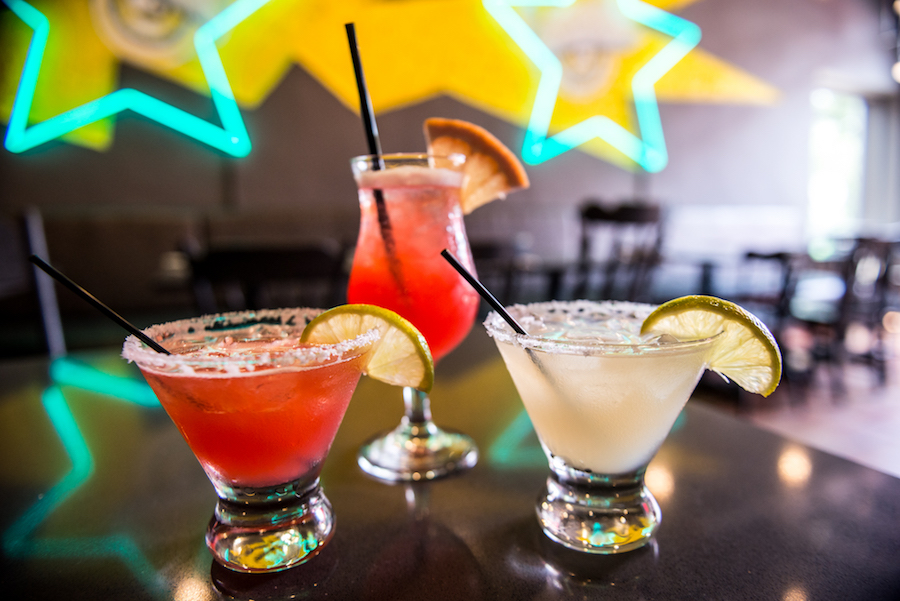 Drinks and Dessert: While the tacos tempt your taste buds, the drinks are what has earned Taco Junky its reputation. In addition to an award-winning marg (made with fresh lime juice), you can try different infused tequilas in a flight, like apple cinnamon, cucumber, mango-kiwi, blueberry, pineapple-habanero and ginger-pear flavors. There’s even orange-carrot and lavender-lemon tequilas (when it’s in season).

Like the tacos, the tequilas change with the season. For the fall, there’s roasted red pepper lemon. In the winter, look for a cranberry tequila. The brand is all about freshness and the arts (hence the decor and music). You might even find local artists jamming in the corner.

Other creative cocktails that totally work with tacos include Sweet Lava, the habanero-pineapple tequila accented with mango and raspberry, and the White Mexican: vodka, housemade horchata and Kahlua.

Wrap up your experience with dessert; a must-try is the infused tequila nugs. They’re kind of like donuts, only better, with cinnamon whipped cream and chocolate sauce. For a classic Mexican dessert, you can’t go wrong with apple empanadas.

Inside Tip: Friday is Flight Night, when you can get a triple flight of infused tequilas and three tacos for just $10. 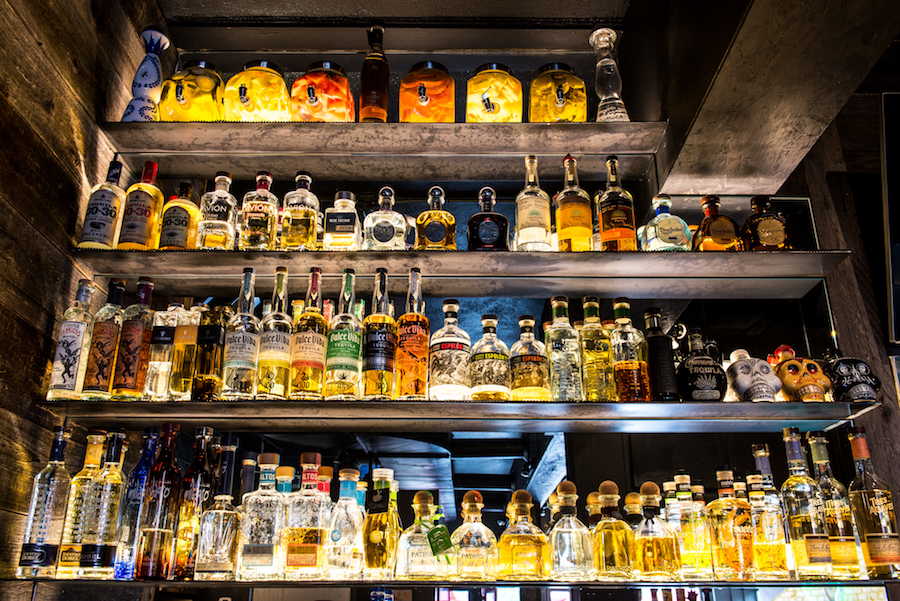 A wall of tequila at Taco Junky. Courtesy photo