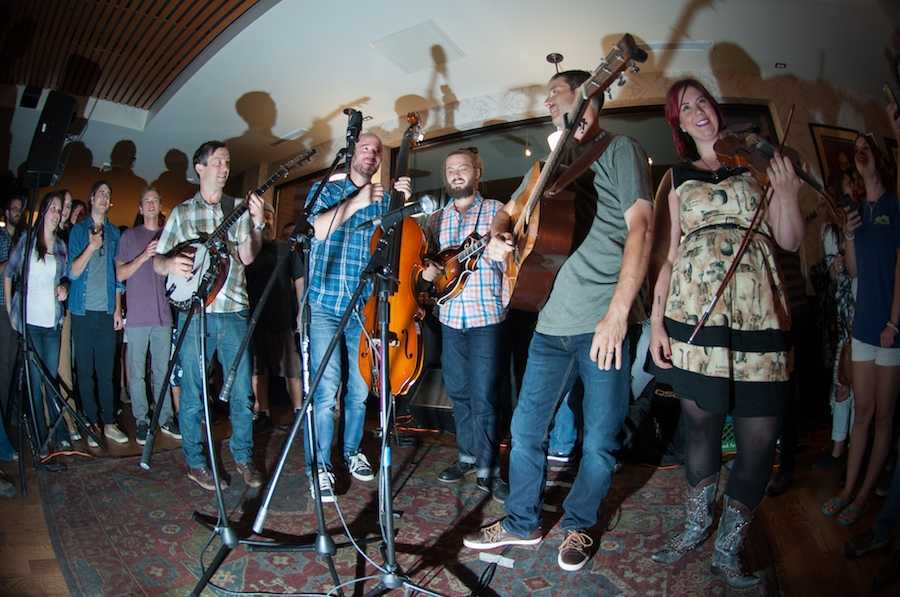 Yonder Mountain is one of Boulder’s most beloved bands, one that’s world-famous in the bluegrass scene.

The band has more than earned its reputation over the years. It started in 1998 and released its first album, “Elevation,” in 1999. It’s been jamming at Telluride for 19 years and has released five albums and multiple live recordings.

The band recently wrapped up its national winter tour and is also gearing up for a Red Rocks Amphitheater show Aug. 4.

We caught up with guitarist Adam Aijala while the band was on tour in Wisconsin in February. We wanted to learn a bit more about this fun band and its members. Here’s how it went down.

How has the Telluride Bluegrass Festival changed over the years?

They’re always shooting for new, interesting people in the line-up. It’s one of those things we’ve been doing for so long that when it comes up, you can’t believe a whole year went by. A lot of times, the only place you see some people is there; it’s like a family reunion of sorts.

Do you prefer touring or festivals?

If you can make a tour around festivals, with club dates in between, that’s always good.

It’s different. At a club show, people are there to see you, whereas at fests, sometimes there’s a mixed crowd. On the plus side, you can turn people on to your band who may not have heard you otherwise, and economically it’s more bang for your buck to do a festival; you make more money. I like playing outside, assuming its a reasonable temperature. But playing in extreme cold or hot is not ideal. Acoustic instruments don’t really stay in tune that well when it’s extreme hot or cold, but in general, outside music sounds better and has good aesthetics.

What are your Boulder ties?

I moved to Colorado in October of 1997. I was a forestry major in college and worked in the woods in Idaho, snowboarded in Tahoe and then got a forestry job in California. When I messed up my knee, I started playing a lot of guitar. A friend told me the music scene was awesome in Colorado. He lived in Nederland and said, “You can stay with me.” That’s where I connected with the band.

My roommate at the time saw a couple of the guys playing, and they needed a guitar player. We started picking together just for fun.

What is a big misconception people have about you or would be surprised to learn?

We’re definitely not serious. We take the business serious, but we try to just enjoy ourselves if we can. Life’s too short.

What is your proudest accomplishment?

I think the biggest accomplishment is the fact that we’re still doing it. In the first three to five years, my expectations were far exceeded way back then. But we’re still getting after it, still playing around the country.

I feel really lucky we can still do it. There’s so much competition, so many bands now, so many people listen to so many different kinds of music. Even with a band that someone would consider not related musically at all, if we’re both in the same town the same night, we have competition. To still be able to survive and do what we do is really fortunate.

And really, it’s not only still doing it, but we’re still writing new songs and still feeling inspired musically.

What’s the key to your longevity?

We created a niche. We’re not mainstream by any stretch and never will be. I don’t think bluegrass and its derivatives will ever be mainstream and I’m okay with that.

If we formed now, I don’t know if we’d be able to do as well as we’re doing. I almost feel like it was the right place at the right time.

Even though the band is better than it’s ever been, people only have x amount of money in their wallet and there’s a lot of music to choose from, especially on the Front Range.

I don’t think any given spot necessarily influences what I write. It’s more about what comes into my head.

Sit in my house. We’re gone so much that I do like to stay at home. There are so many good restaurants in Boulder but I like to cook as well. I play golf when I can. In Hygiene, there’s good batch-fishing. There are all the cool day hikes, like Sanitas and the Royal Arch.

What do you think about Boulder’s changes?

Boulder’s changing a lot. There’s so much infrastructure right now, all those new hotels. People who used to live there, I could blindfold you, take you to street corners and take the blindfold off and they would know where they were.

Everyone’s always pining for the years gone by. I still think Boulder’s cool. There are just a lot more people. It’s a lot more crowded.

Where do you bring your guests when they visit Boulder?

People who are from states without legal weed want to go to a pot shop. I usually take them to the Farm. They give a weed tour and let you smell different weeds.

El Pastaio is one of my favorite restaurants. I like the squid ink pasta with mussels and shrimp. It’s super garlicky, too. My wife doesn’t like garlic that much so I get it when she’s out of town. Lots of times I make sauce and get the fresh pasta from El Pastaio.