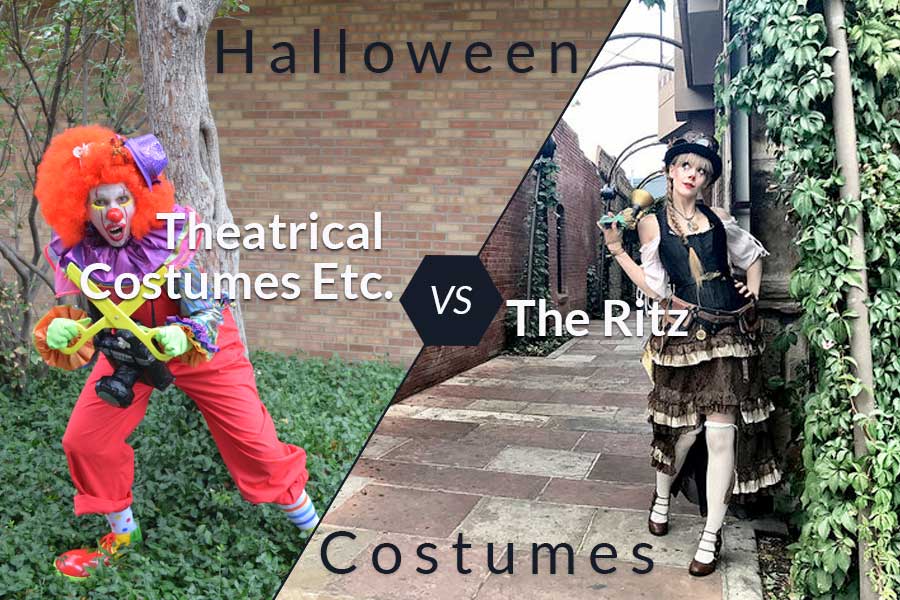 Halloween has infinite creative potential. Maybe that’s what makes it feel so magical. Your costume can be as unique as you can imagine it to be.

Halloween has no rules. Imperfection can add to the inspiration. You can mix and match different costume ideas to create your own character. With a few accessories, you can transform an existing character to express a completely different mood. Make something innocent scary. Make something scary friendly and cheerful.

The latter is how Debra Ordway likes to dress up.

The other main store is The Ritz, downtown.

Both have been Boulder staples for many years. Both have an extensive costume collection and die-hard fans. And if you look deeper, both shops are different and serve unique roles in the community.

To help express the difference between the two stores, we asked the owners to put together their own interpretation of a clown costume — yeah, we were inspired by Stephen King’s “It.” Not to mention a clown is one of the most classic costumes with the potential to go in all kinds of crazy directions.

Here are the two clown concepts, side by side, to show you, not just tell you, about Boulder’s two different costume stores.

If you’re looking for a Halloween shop this fall and aren’t sure where to go, let this help guide you. 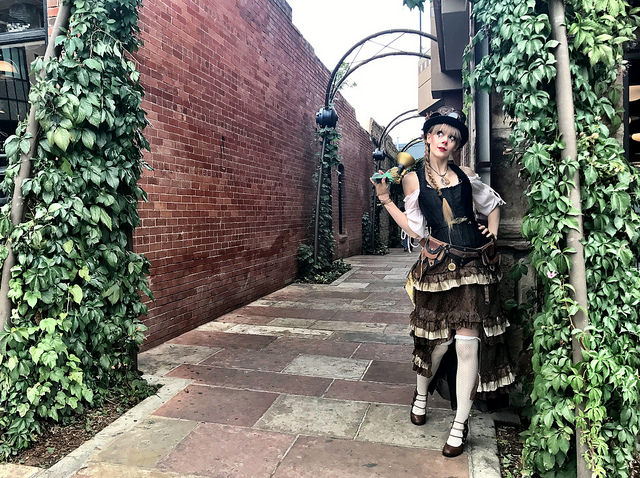 Susan Nutting, the owner of The Ritz, steers clear of trademarked costume ideas, like replicating the “It” character. Instead, she chose to fuse together two seemingly unrelated costume concepts — clown and steampunk — to create something new. You aren’t going to see anyone else dressed as a steampunk clown at your party. And if you do, they’re probably your skullmate mate and you should friend them stat.

For The Ritz’s clown (modeled by Margret Skowronski), Nutting started with a classic steampunk get-up: an off-the-shoulder, gauze blouse paired with a black brocade racerback corset. On the bottom, there’s a beautiful, tiered, multi-fabric bustle skirt worn over a lace and faux leather steampunk skirt.

On top, add a leather-detailed tophat with feathers, gears and goggles. 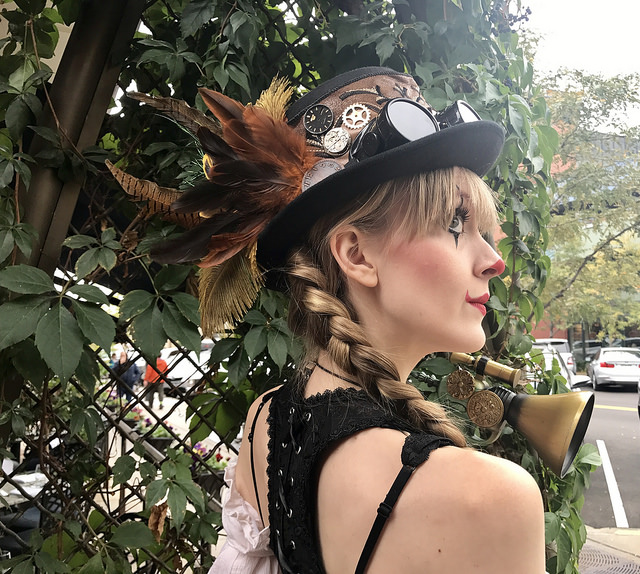 A steampunk hat from The Ritz. Photo by Aimee Heckel

For jewelry, there’s a mixed-metal steampunk-inspired necklace, brooch and monocle, (Yes, a monocle and goggles, why not?), plus an upcycled leather “festival” belt, subtly sexy over-the-knee “pointelle” socks, mesh and ribbon lace-up fingerless gloves and the most adorable brown Victorian-inspired, button-closure booties. 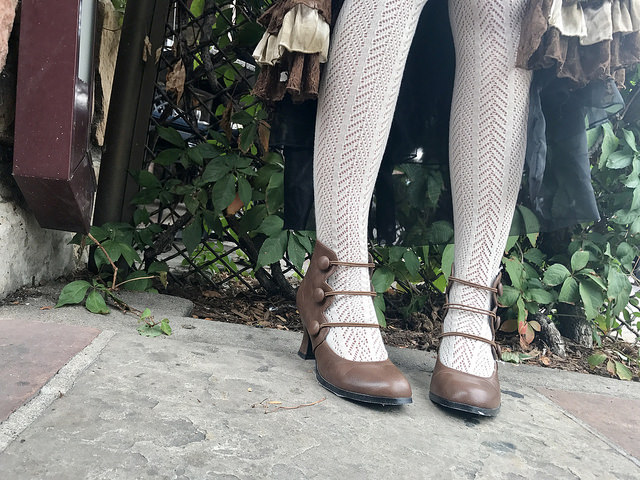 Victorian-inspired shoes from The Ritz. Photo by Aimee Heckel

The simple clown accent was added with subtle face paint. 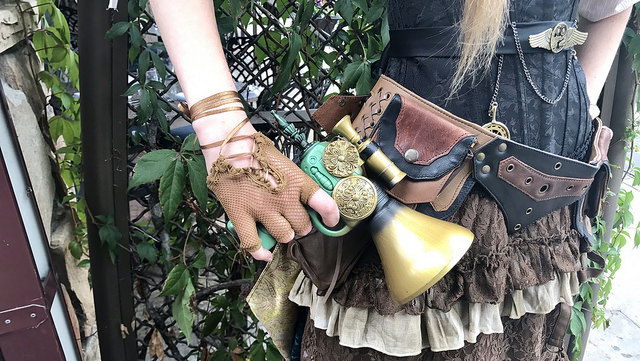 Steampunk accessories from The Ritz. Photo by Aimee Heckel

Nutting’s costuming tips, embodied in this costume: “Think head to toe. If you don’t know what to be, take a loop around the store and find one piece you love or envision who you’d like to embody and go from there. Once you’ve found your inspiration, layering is key. A great costume is all about the details. More is more.”

Costumes the Ritz is loving this year include medieval fantasy, pirates, all your favorite superheroes, steampunk, female warriors. Now combine a few together and see what you might invent. 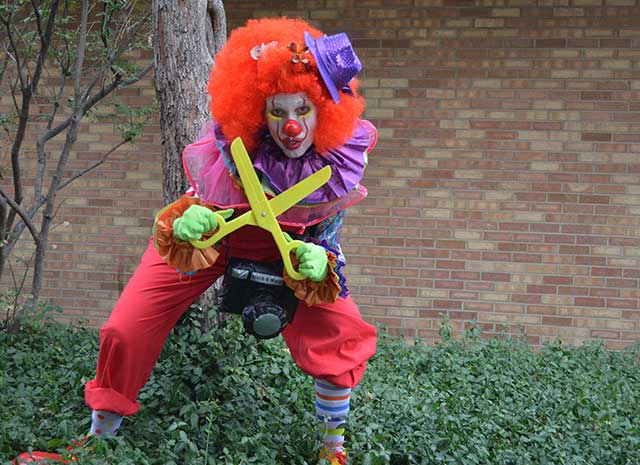 Ordway, the owner of Theatrical Costumes Etc., said she loves to turn the negativity into something positive, in how she runs her business and also how she designs costumes. Many people are afraid of clowns, so her goal was to create a clown costume that was friendly, fun and welcoming to anyone.

Of course, Theatrical Costumes Etc. has a variety of costumes, including the scary ones, but Ordway says she is careful to try not to offend anyone with her selection. She says she actively strives to avoid vendors that carry potentially derogatory products, and she says she listens to her customers (many of which are University of Colorado students, due to her location near dorms) if they feel an issue with a costume piece.

Halloween is supposed to be fun, Ordway says. Not stressful.

She says she welcomes the challenge to get creative in a positive way. 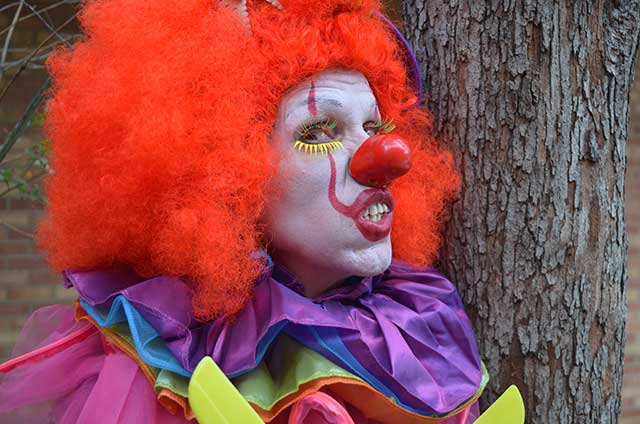 Her tips for making a clown less scary: Don’t paint the whole face (although she chose to her in costume). Express happiness in the cheeks. Pick a bright accent color to tie into the wig.

“We rethink things positively,” she says. “That’s my signature. I take something, and I make it different. If I have any legacy to leave behind, that would be my legacy.” 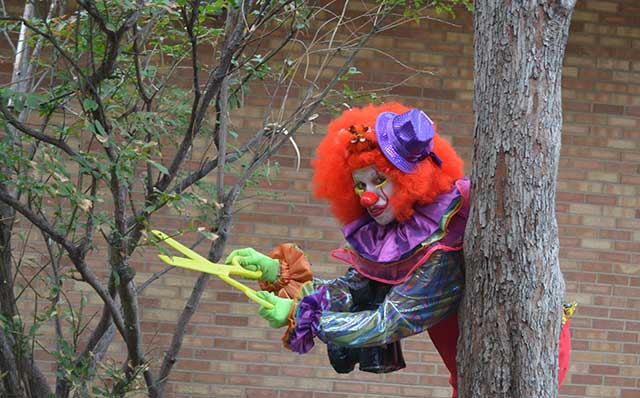 Theatrical Costume Etc.’s clown (modeled by Ordway) has the classic clown features: large clown shoes, a light-up clown collar, a red wig, red bib overalls, a bandanna in the back pocket and a traditional clown nose. The unique accents are where she plays into the cheerfulness of her idea: an ‘80s-style, glitzy shirt, a purple sequin hat and neon green gloves.

The closest thing to scary here is “monster teeth,” but in the context of this outfit, she hopes they’re funny, not fear-inducing. Ordway makes her costume playful with an oversized Flash-O-Magic, blow-up camera and giant, plastic yellow scissors. She did her makeup with products by Ben Nye. 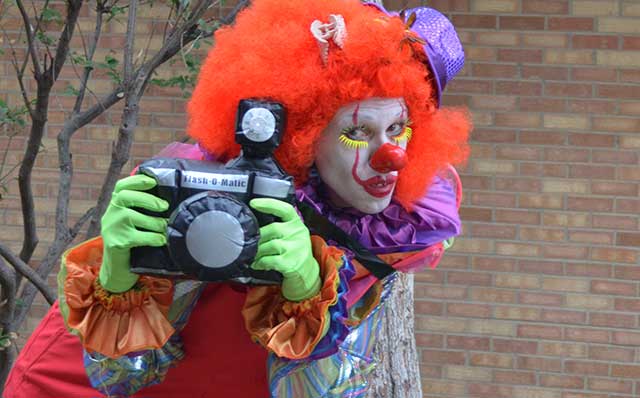 Flash-O-Matic blow up camera is a perfect clown prop. Photo by Tyler Percy

The camera makes this clown feel less scary, and instead of a knife or weapon, like a scary clown might carry, the super-sized scissors are silly. Finally, neon, neon and more neon, Ordway says. Bright colors tend to have positive associations.